It’s important for people to be aware of who’s coming up on the bench. 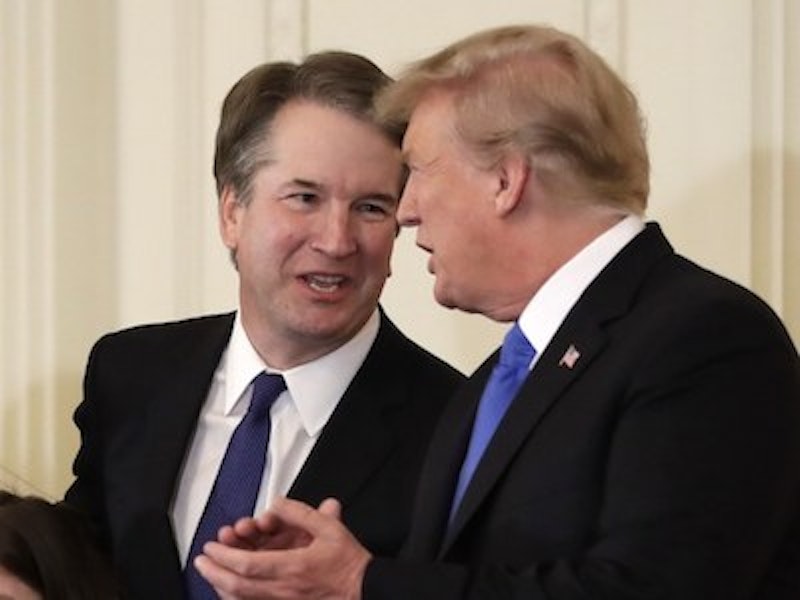 A Supreme Court nomination is always striking, because it brings into sharp focus the strange relationship Americans have with the law, often divided over an enormous number of substantive legal issues ranging from the powers of the government to minor issues in statutory policy. There are a number of issues that are going to come up around Brett Kavanaugh, not the least of which involve his position on whether or not the president can be subject to criminal indictment while in office.

My take on Kavanaugh is a bit different. One of the subjects that I’ve been involved in teaching at the University of Calgary is a (relatively new) class on Information Technology Ethics, basically philosophical ethics geared towards issues in digital communication, algorithmic accountability, and computer science generally. While working on the material, there are three conservative scholars in American jurisprudence that I’ve brought up; University of Chicago professor and judge Richard Posner, Harvard University professor and former Solicitor General Charles Fried, and former Harvard University visiting professor and sitting D.C. circuit judge Kavanaugh.

I use Posner’s work on privacy rights to raise concerns about the application of historical approaches to privacy in the age of the Internet. (If the boundaries of the private residence are important to circumscribing privacy rights, as Posner suggests, then how does the Internet fit into that? Does it?) I raise concerns about free speech and the protection of information and platforms based on Fried’s work, as well as his work on terrorism, which raises increasingly challenging questions for the limits of free speech and access to information in the digital age.

But Kavanaugh is different; given his nomination to the Supreme Court, it’s important to get into the technical details of his positions, especially where those should raise flags for everyone in the political discourse. The most salient discussion regarding civil liberties and Kavanaugh’s jurisprudence is the concurring opinion he wrote in denying a petition by conservative lawyer and conspiracy theorist Larry Klayman; a few civil libertarian folkshave commented on the issue. I regard Klayman and his systematic lawsuits against the Obama administration as vexatious. Legal commentator, journalist and blogger Ed Brayton at Dispatches has described Klayman as one of the dumbest lawyers in America; the fact that Klayman’s patently ridiculous petition was denied isn’t interesting. What’s interesting is what Kavanaugh said in his concurrence.

“Even if the bulk collection of telephony [sic] metadata constitutes a search… the Fourth Amendment does not bar all searches and seizures. It bars only unreasonable searches and seizures. And the Government’s metadata collection program readily qualifies as reasonable under the Supreme Court’s case law. The Fourth Amendment allows governmental searches and seizures without individualized suspicion when the Government demonstrates a sufficient ‘special need’— that is, a need beyond the normal need for low enforcement — that outweighs the intrusion on individual liberty. Examples include drug testing of students, roadblocks to detect drunk drivers, border checkpoints, and security screenings at airports.”

What Kavanaugh says in this discussion is eminently reasonable for a permissive view on law enforcement; he cites Sotomayor on this issue that data gathering is subject to 4th Amendment evaluation, but holds a very broad view of when it is permissible for the government to engage in search and seizure. That’s what should worry people who are concerned with civil liberties in the face of law enforcement.

Immediately following the passage, Kavanaugh cites the 9/11 commission report and writes: “In my view, that critical national security need outweighs the impact on privacy occasioned by this program.”

In a 2015 opinion, he cites a 2004 report as a justification for security, which is a lot of breadth to give to the government, suggesting that security concerns from a decade ago are still relevant to tempering data gathering policy. But it gets especially worrisome given what he says next: “The Government’s program does not capture the content of communications, but rather the time and duration of calls, and the numbers called. In short, the Government’s program fits comfortably within the Supreme Court precedents applying the special needs doctrine.”

This is a shortsighted view of what the government can glean from metadata. The challenge in the era of mass data gathering is that it turns out even apparently innocuous data can be used to derive predictions about the behavior of the person whose behavior that data describes. Consider an accessible, non-technical example. Every day, you use your preferred device for browsing the Internet to visit different sites. Most Internet users have cookies enabled, that serve to identify you to the websites you’re using, in order to track your preferences and (if a relevant feature) things like login information. Cookies can also be used by advertisers to target you with ads that you want, based on your browsing history. All of this seems pretty straightforward, except that advertisers who get access to this sort of data can also make predictions about you, including personal information like sexual orientation and medical conditions. What is the status of that information?

This is a standard question we pose to students in Information Technology Ethics. Suppose that I can take public information about you and use that in conjunction with some software to predict (with a high, though imperfect, degree of accuracy) private information about you. Should the law stop me from making those sorts of predictions? Should the law stop me from gathering the public information in bulk, given that stopping me from making those predictions is hard once I’ve got that information? Kavanaugh’s position on this issue seems that it’s perfectly legal, in lieu of the 9/11 report, for government intelligence agencies to gather lots of metadata that could be used in precisely this way; the government isn’t gathering cookies, but rather phone calls to other numbers (many of which are publicly listed) and can do a lot of predicting based on that information. What should we say about the status of government programs like that?

Kavanaugh’s view seems to be that, absent some congressional or executive action to preclude the NSA or other intelligence agencies gathering information, it’s legal for them to do so; it’s a search, per U.S. v Jones, but legally defensible on the grounds of national security interests. This view should worry civil libertarians, including Senators Rand Paul (R-KY) and Mike Lee (R-UT). Whether they will raise the issue publicly remains to be seen.

There’s another case that’s more likely to get attention, partly because it doesn’t require anyone on the Senate Judiciary Committee to understand the implications of surveillance technology. (A point on which I’ve become especially cynical since Mark Zuckerberg’s testimony before the committee.) That is the case of Meshal v. Higgenbotham, which appeared before the D.C. circuit in 2015.

Meshal is an American citizen who’d been living abroad in Africa; he was captured during the War in Somalia and interrogated by the Joint Task Force, including representatives of the United States. According to Meshal and the ACLU (who represented him), these interrogations failed to adhere to 4th Amendment standards or the Torture Victim Protection Act of 1991; the suit alleges Meshal was threatened with torture, disappearance, and other measures well recognized as illegal according both to the U.S. Constitution and international law.

The details of the case are less important here than what Kavanaugh says. In his concurring opinion, he writes: “The United States is at war against al Qaeda and other radical Islamic terrorist organizations… The war continues. No end is in sight. In waging this war, the United States has wielded a wide array of federal assets, including the military, the CIA, the FBI, and other U.S. intelligence and law enforcement agencies. The traditional walls dividing military, intelligence, and law enforcement operations have given way to a more integrated war effort. As President Bush and President Obama have explained, the United States employs military intelligence, and law enforcement personnel in an often unified effort to detect, surveil, capture, kill, detain, interrogate, and prosecute the enemy.”

In short, as in the preceding opinion, Kavanaugh maintains that the war on terror justified and continues to justify an expansive array of law enforcement tools, including the use of ethically questionable interrogation techniques against American citizens. Throughout the decision, Kavanaugh maintains that the declaration of the war on terror and the suspicion by the investigators that Meshal was an al Qaeda operative justified the suspension of his rights and meant that Meshal could not file a legal action against the agents violating the Torture Victim Protection Act or his 4th Amendment rights. Parts of his points are procedural, as to which of the laws applies to foreign officials (the TVPA) and which to U.S. officials (the 4th Amendment).

Kavanaugh’s logic in the ruling suggests that joint forces detaining America citizens outside of the United States could have broad powers of interrogation that would allow the American citizen no legal recourse against either the foreign agents involved in his or her detention or American agents involve in interrogation. As an American living in a foreign country, and frequently traveling internationally, this finding is terrifying; if I were detained by a foreign authority and interrogated in such a manner on suspicion of terrorism (a broad ground that does not require a substantive defense from those law enforcement or intelligence officers, as in the Meshal case), it’s entirely possible that I’d have no substantive recourse in Kavanaugh’s view. As long as the investigation occurs abroad and involves national security interests (pp. 3–4), there is no judicial recourse.

Given his broad view on wartime powers, his view that the war on terror is ongoing (“with no end in sight”), and that oversight of policy in detention and interrogation under such circumstances is subject to congressional oversight, but not constitutional protection (including the 4th Amendment) through the judiciary, Kavanaugh’s views should be troubling to anyone who’s concerned about giving law enforcement a wide berth without the possibility of civil recourse. That’s the sort of issue that should unite liberal civil rights activists (including law enforcement and criminal justice reform advocates) with conservative civil libertarians (including the Libertarian Party proper, 2nd and 4th Amendment watchdog groups, and anti-torture advocates).

There are two points to be drawn on Kavanaugh’s nomination and forthcoming Senate hearing; the first is that Kavanaugh is a troubling judicial thinker on issues of civil liberties, for the reasons outlined above and other such cases and opinions where his thinking proceeds along these lines.

The second is a point of political cynicism; there’s no reason to think that the principles of Senators guide their decision whether to vote for a given nominee, especially when in conflict with issues of party loyalty and political expedience. Based on the concerns above, it’s easy to imagine Rand Paul or Mike Lee strongly opposing Kavanaugh on the basis of principle; it’s also easy to imagine Sen. John McCain (R-AZ) taking issue with Kavanaugh’s broad view of wartime powers and the implications for indefinite detention and “enhanced interrogation.” Unfortunately, the fact that such opposition would accord with their most consistently expressed principles doesn’t mean they’ll vote that way.

It’s important for people to be aware of who’s coming up on the bench, even and especially if the political figures we usually count as voices for important moral and legal principles fail to speak up on behalf of those principles now. Kavanaugh, like recently confirmed CIA director Gina Haspel, is the sort of figure with a history of troubling positions on civil liberties; these positions aren’t (and shouldn’t be) partisan issues, even in the face of the partisan process of political appointments.