Eisenhower Was the Embodiment of 1950s America

A review of William I. Hitchcock’s The Age of Eisenhower. 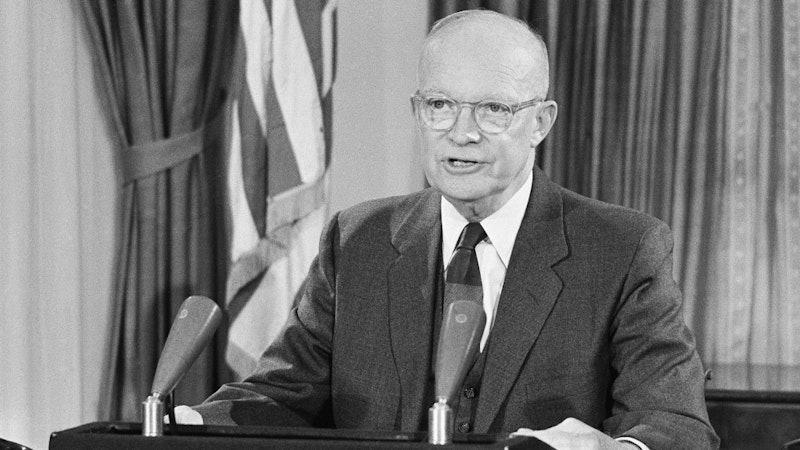 Superficially, Dwight Eisenhower’s perhaps the least distinctive postwar president: a systems man, an intelligent analytical older white male with a wife and no rumored infidelity (barring a possible wartime romance that may never have happened and may have been emotional rather than physical). Few obvious programs or achievements have attached themselves to his name the way Johnson owns the war on poverty and the war in Vietnam, the way Nixon’s known for going to China, the way Reagan’s linked to the war on drugs.

And yet it’s possible to argue that in some subterranean way Eisenhower rebuilt his country in his image. White-collar workers began to outnumber blue during his time in charge. The web of international organizations Donald Trump’s trying to tear to bits developed significantly under Eisenhower. Ike was a devout small-town Kansan who hated Communism and believed faith was a necessary part of American life and of each individual American; the nation’s mainstream culture reflected this with a frequently oppressive rigor.

William I. Hitchcock’s biography The Age of Eisenhower isn’t misnamed, then. An extensive look at Eisenhower’s presidency, with a focus on policy and particularly foreign policy, it’s well-written, intelligent, and clear-eyed. Sympathetic to Eisenhower, Hitchcock empathizes with his subject, but doesn’t shy away from his errors. The book’s a little odd as a result. Hitchcock finds much to admire in Eisenhower, but a reader less engaged with Ike will wonder why.

Hitchcock moves quickly over Eisenhower’s early life in a few chapters. Perhaps too quickly, as one wonders how much Ike’s early life shaped his perspective as president. What attitudes did he develop about race? About women? Hitchcock makes it clear Eisenhower was brought up with a strong religious faith; how did he see that coexisting with his military career? What did it mean to him to shoot a man, or to order people to death? Hitchcock doesn’t even glance at these questions, and from time to time through the book, I found myself wondering.

For example, as Hitchcock describes Eisenhower’s reaction to the civil rights movement, he’s careful to point out that Eisenhower avoided any substantive leadership on the issue until he was essentially forced into it. Claiming to believe in a limited government, Eisenhower insisted that laws could not force racists to behave equitably. And yet it’s not clear he tried hard to find another alternative.

Consider also the women in the book, or lack thereof. Mamie Eisenhower’s a distant presence, who to judge by this book had little visible effect on her husband’s thought or policy. Hitchcock notes that when Eisenhower held dinners for the power elite of the US, his guests were always male (550 of them over the course of one two-year period). There’s no mention in the book of any concern with women’s issues at all, and only a very general discussion of the patriarchal culture of the 1950s.

There’s rather more talk of how Eisenhower’s religion played into his policies, specifically into his anti-Communism. For Eisenhower, Communists were godless and therefore the godless were Communists, or at least unwitting Communist allies. This was an era when Americans in general were becoming more devout—Hitchcock notes that church membership rose from 49 percent in 1950 to 69 percent by 1960—and Eisenhower viewed democracy as the way to work God’s will. The Cold War was a spiritual struggle, for him. Which explains the quiet but ferocious way in which he fought it.

Hitchcock ably covers the clandestine activities of the US in Guatemala, Iran, and elsewhere. Driven by a need to confront the Soviet Union without actually confronting it, Eisenhower authorized a series of covert operations around the globe. He involved the US in what was then French Indochina—hesitantly, but setting the stage for an inevitable broadening of US activity into the Vietnam War. Hitchcock sees Eisenhower as successful on the world stage, but it’s difficult to agree given the terrible cost to countries around the world. Ike’s chief success, perhaps, was a negative one—he didn’t start a nuclear war or use nuclear weapons. But he and his cabinet did not seem to realize that nuclear missiles weren’t just very powerful explosives; they didn’t grasp the basic nature of the weapons in their arsenal.

That said, Kennedy would win election in 1960 in part by running to Eisenhower’s right with respect to Communism and international affairs—he argued Eisenhower was ineffectual, that American power was declining. There may have been some cynicism in this posturing, but the electorate responded. Eisenhower was not unlike Obama in that he was personally well-regarded but oversaw a decline in his party’s standing; the Republicans lost seats in Congress during his time in office. Eisenhower himself stood notably apart from the isolationist right of the party, meditating at moments about creating a “Middle Way Party.”

Ensuring the wrath of the right, Eisenhower didn’t move to repeal most of Roosevelt’s New Deal. He didn’t expand it, though, philosophically convinced that government should have as little involvement with the economy as possible. American prosperity during the 1950s would seem to vindicate him, but one may well doubt. Most competing industrialized powers were still digging themselves out from World War Two. Much of the rest of the world was engaged in anti-colonial struggles (and it’s certainly to Eisenhower’s credit that he did at times support these struggles, as during the Suez crisis). Did his policies lead to prosperity, or was the United States the beneficiary of a fortunate geopolitical moment?

Perhaps how you answer that question will determine how you feel about Eisenhower. Hitchcock gives him credit, and sees him as an effective leader on the world stage. I feel that his book’s even-handed enough that it’s possible to come to a different conclusion, which speaks well of his scholarship.

Strikingly, Hitchcock establishes a personal characteristic that Eisenhower carried over to politics from his military career: a masterful grasp of logistics. That careful, structured organizing returns again and again through the book. Hitchcock makes the point that the image of Eisenhower as a disengaged roi fainéant is obsolete, and that scholars have rehabilitated him as a politician who preferred to act behind the scenes. Not a daring Napoleon, then, but a man who succeeded by careful planning and the manipulation of systems. Ironic that one of his most famous pieces of rhetoric was a final warning about the military-industrial complex, the system of arms-making and war-making that was beginning to shape American industry and by extension American life. Nevertheless, The Age of Eisenhower earns its title: this is a convincing argument that Eisenhower built the 1950s as much of America experienced them.