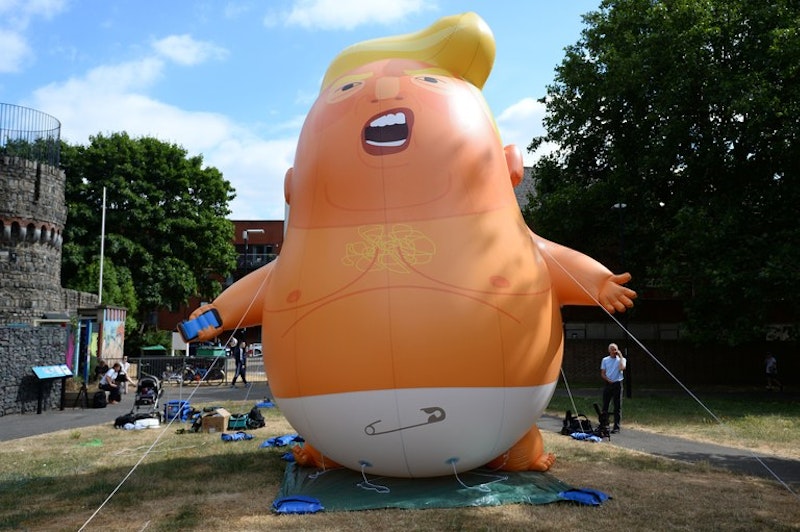 It's an article of faith among Never Trump conservatives that Donald Trump is an aberration. A bigoted ignoramus hijacked the party's nomination process: how did this happen? Maybe it's the fault of liberals, for being extreme, uncivil and forcing conservatives to do the same. One thing’s for certain—before Trump, the Republican Party was a bastion of principles and after he’s gone it’ll return to its former mission.

Damon Linker of The Week posted an unusually naked example of the typical Never Trump apologia last week. His article is ostensibly about the Brett Kavanaugh Supreme Court nomination. But the real emotional force of the article is a desperate and churlish insistence on the virtue of good, moderate GOP partisans like himself in the Trump era.

Linker argues that Trump's nomination of Kavanaugh is an example of government functioning normally. Trump has done lots of bad things, Linker acknowledges, but Kavanaugh is a qualified judge with conservative positions, nominated in the usual way. Liberals who "freak out" over the nomination, therefore, are crying wolf and undermining their own case against Trump. When Joss Whedon says that the nomination will "cement the first American dictatorship," he's indulging in hysteria.

"The mainstream Democratic position has arrived at the point where it considers not just President Trump's most egregious statements, behavior, and policies to be a truly alarming threat to liberal democracy in America—but longstanding, mainstream Republican positions an alarming threat, too," Linker writes. Democrats are making it harder to condemn Trump's truly outrageous actions and statements.

Linker acknowledges that Senate Majority Leader Mitch McConnell used "abnormal" procedural methods to blockade a Supreme Court seat for a year, preventing Obama from putting a liberal on the court, and leading to the imminent five-vote conservative majority. Liberals are in part panicking about the court because there’s a very real possibility that abortion rights may be drastically rolled back, which would result in a spike of back-alley abortions, and the deaths of many women. It's not just Trump who has trampled democratic norms. Republicans have been doing that for years, and the current balance in the Supreme Court is the direct result.

Moreover, a Republican court is frightening in the Trump era because it seems likely that it’ll enable Trump's lawlessness and anti-democratic impulses. Kavanaugh has suggested that presidents should be immune from indictment—an ominous opinion since the current president could reasonably face criminal charges linked to Mueller's Russia investigation. And for that matter a conservative majority on the court just upheld Trump's racist Muslim ban.

Trump continually pushes at the edges of democratic norms, trying to create policies that will target marginalized people. The court is one institution that’s supposed to restrain the executive branch when it tries to separate children from their parents, strip people of their citizenship, or attempt to retaliate against journalists by deporting them. But a conservative court is likely to acquiesce to most of Trump's excesses, just as a conservative Congress has acquiesced. When Trump leads the Republican Party, there’s no separating Trumpism from Republicanism.

Linker insists this isn’t true. "If [Democrat's] dire assessment of the peril posed by supposedly normal Republican ideas and goals is valid, then it means that one of the country's two parties poses something like an existential threat to our form of government," he writes, before arguing that this is patently ridiculous, or just too depressing to contemplate.

But if the problem is solely Trump, how do you explain the nomination of Roy Moore in Alabama? How do you explain the Bush presidency, which lied to the American public to justify a pointless war, and then ditched the Geneva conventions? Linker has forgotten that the previous Republican administration was also incompetent, totalitarian, and ended in a lost war and the worst financial collapse in 80 years. If that doesn't qualify as an existential threat to democracy, what does?

Trump isn’t a disease. He's a symptom. The Republican Party has slid into conspiratorial nonsense, irresponsibility, and fascism for decades, going back at least to Gingrich, and probably to Nixon. At this point, every advance of Republican partisanship is a danger to our democracy. "I have a hard time imagining anything more alarming than that," Linker says. He shouldn't have to imagine it, since he's living it. But Never Trumpers would rather let democracy crumble than admit that Democrats and the left are right.