How to Keep the New Women's Movement Alive 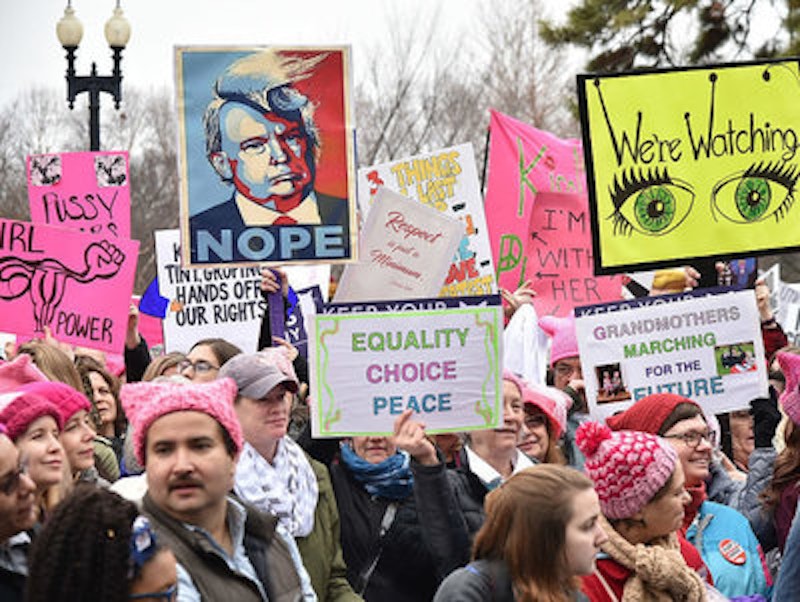 The women's marches on Saturday were delightful and astonishing. Losing control of history and the government of the United States were preconditions for the emergence of a left with any cohesion, urgency, credibility, or commitment. A left fighting for continuity with the previous administration, or voting for the oligarchy because it has tossed up a female, is a boring left, or not really a left at all, or for that matter much of anything.

In most of the rallies in major cities, Democratic politicians appeared, some of them jockeying for the next presidential nomination. Speaking in D.C., Michael Moore insisted that all (let's call it) 750,000 people he was talking to commit themselves to run for office, which really would be anarchy. But I am begging you, sisters and fellow humans, do not feed this magnificent, funky energy into the Democratic Party. The Democratic Party is where social movements go to die. They'll replace your pussy hats with something more respectable. They'll replace your hilarious signs with pseudo-signs that say "Make America Sick Again." They won't let Madonna say, "Fuck you." They'll replace your love and solidarity with focus-grouped strategic communications. And they’ll market your movement to their mega-donors. You’ll become a fund-raising strategy.

There were more people on the streets Saturday, I think, than at any time since Nixon bombed Cambodia in 1969. But by 1972, the Democratic Party—the party of LBJ—had annexed the peace movement, and then lost in a landslide. From wild-ass Yippies, Woodstock Nation, Black Panthers, and all sorts of people finding new ways to be, 1960s radicalism became a wing of the establishment: neutered, ready to do little but whine through the Reagan years.

The real disaster was what happened to the civil rights movement. Martin Luther King was not a Democratic strategist. LBJ tried to control him: to cajole, blackmail, absorb and short-circuit his movement. King was not the sort of person you could do that to, but in the next generation the civil rights movement failed, petering out into people trying to rise in the American political hierarchy. Jesse Jackson ran for President. John Lewis… well, John Lewis sold his soul to the devil, and spent most of his life bashing Republicans and functioning as an emblem or mascot of the goodness of Democratic politicians as they did massive housing projects and mass incarceration, for example.

That’s how the civil rights movement died. It's an important reason why the racial situation in the country has improved so little since King's day. Various black politicians rose through the hierarchy, providing the superficial appearance of equality that permitted the racist power structure to engage in continual self-congratulation as it pursued directly repressive and destructive policies.

The black vote became the most monolithic vote in the history of democracy: 90 percent Democratic under all circumstances. There was no possible reason for Republicans to listen to them. And there was no reason for Democrats to: black people were going to vote for Democrats. They thought they had to turn their magnificent egalitarian energy into mainstream political power. They ended up with no leverage, little moral reality, and no effect. If the pussyhat movement becomes a mere permanent gender gap, that's the fate that awaits.

So I wouldn’t make a martyr/hero/saint out of Hillary Clinton. She ran an empty, safe campaign. She’s a symbol of the oligarchy, and one of the most privileged people in the world. If she’d been elected, as little as possible would have happened for as long as possible, but the administration would’ve been the all-time lobbyists' paradise. Being female is not enough. The miserable identity politics of her campaign, and Trump's, divided women, and she lost white non-college educated women by 10 points. She chopped white women up into elite or coastal women as against female deplorables. But Saturday there were all sorts of women in the streets, a sense of unity that mainstream politics will always try to divide to produce an electoral victory.

Keep this movement as far outside the political system as possible for as long as possible. That’s where the real leverage or power of a social movement comes from, not from the possibility that someone might emerge from it, become ever-more conventional, win a Senate seat, and spend the next 30 years schmoozing donors and sorting the right sort of people from the wrong sort in campaign ads. That’s the end of your movement.

When peace, feminism, gay rights and civil rights were genuine mass movements, arising in urgent response to urgent conditions, encompassing millions of people of all sorts, they spoke with credibility, with reality, out of need, out of rage, out of aspiration. They began to change the heart of the country. When they merged with the Democratic Party, they colluded in their own oppression, and became meaningless. When Lewis continues to speak the words of King, they represent a sort of hollow, interminable nostalgia for a moral power long abandoned.

It doesn't have to be like that. There are real power and politics outside the American political system; there’s only money and profoundly false politics within it. There’s no reason to be prematurely or enthusiastically co-opted. Didn't you feel your power yesterday? A group with no appointed leaders, rallies that were not called by some powerful person pursuing her own ascension, but spontaneously organized to capture real needs, real emotions, and real ideas. There’s power there, there’s funk, and there’s joy. But there’s no joy in American mainstream politics, only strategists trying to think about how your energy can be monetized.

This is a moment in which a real left and a real social movement could emerge, is emerging, has emerged. For it to mean anything, it cannot be funneled into sheer political power for a few token representatives.