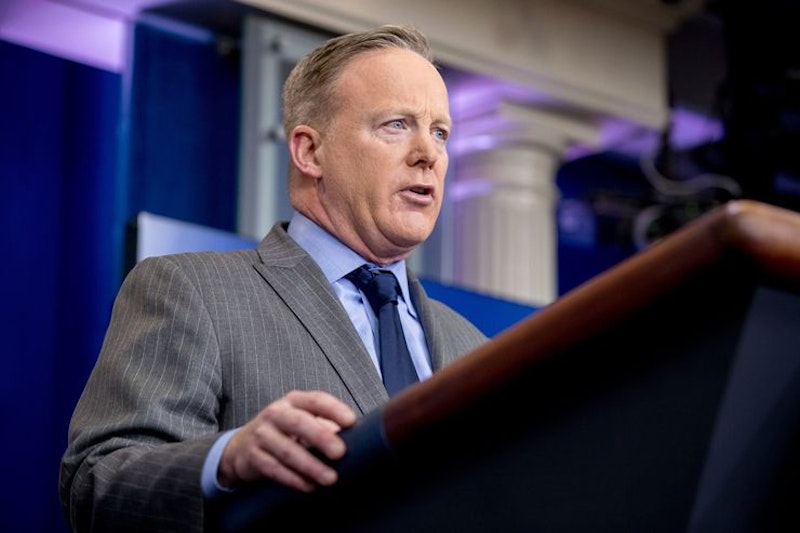 Think about refrigerator hums. Think about pharmaceutical ads on basic cable. Think about assistant store managers giving a talking-to. Think about too-short haircuts with wiry gray hairs at the roots. The occasional white stump of a hair nestled in there like a spike. Maybe along his jowl there’s old-time acne remnants: filled-in pockmarks, a field of pencil dots that folds with his skin. He’s got cologne, a thin lime vapor straining to contain an afternoon’s worth of crisis activity. The boss has been yelling at him. Talking, but yelling.

Sean Spicer’s jowls are petite, like demure clip-ons. His head’s rectangular; atop his shoulders, it looks like a shoe box atop the warehouse’s smallest packing crate. Unless you consider the bald expanse of his forehead, which gives head and face a pencil eraser look. A pencil eraser look, nothing else.

Right now he’s complaining. He may be a man who’s been told to talk loud and isn’t up to it. That’s the best guess, what with Trump. But somebody talking like that is also talking like a panicked man with a bedspread. Wan blobs of light are wading through the windows. A handbag and a cell phone sit near the bed. Traffic can be heard, the sort of aggressively ambient traffic that intrudes on a scene when TV wants to suggest that politeness is tearing and realness is spilling out. Too much realness. The poor man’s explaining premature ejaculation. No, he’s explaining the Trump inauguration turnout. “This was also the first time that fencing and magnetometers went as far back on the Mall, preventing hundreds of thousands of people from being able to access the Mall as quickly as they had in inaugurations past.,” he says.

A woman lights a cigarette and looks with resignation where the wall meets the ceiling. She adjusts a bra strap. It’s going to be a long 45 minutes.

“This was the first time in our nation's history that floor coverings have been used to protect the grass on the Mall,” he says. “That had the effect of highlighting any areas where people were not standing, while in years past the grass eliminated this visual.” Now he’s talking about small dick size.

“Sure,” the woman says. “Sure, doll.” She fishes an ashtray from the side table and stubs out her cigarette. Wan light spills. Traffic mutters. A grave, gravelly voice speaks. It’s the announcer. His spiel fills the air with abbreviations. “… and IPD, or inadequate penile dimensions,” he says, winding up the list of conditions that can be treated. “Medical professionals say,” he continues. It’s a pharmaceutical ad. My mistake. I said to think about pharmaceutical ads and now look. Here we are with Sean Spicer and the bedsheet. In my defense, an actual ad for treatment of small dicks and premature ejaculation would feature someone who looked like George Clooney. Whereas Spicer would be cast in a Law and Order: SVU as a john who thinks the escorts are laughing at him.

“This was the largest audience to ever witness an inauguration, period,” he says. The woman, having lit another cigarette, exhales and makes a mouth. She knows sometimes it’s better to say nothing.