Sifting the Signs of the Trump Era

Soon we find out what this country will become. 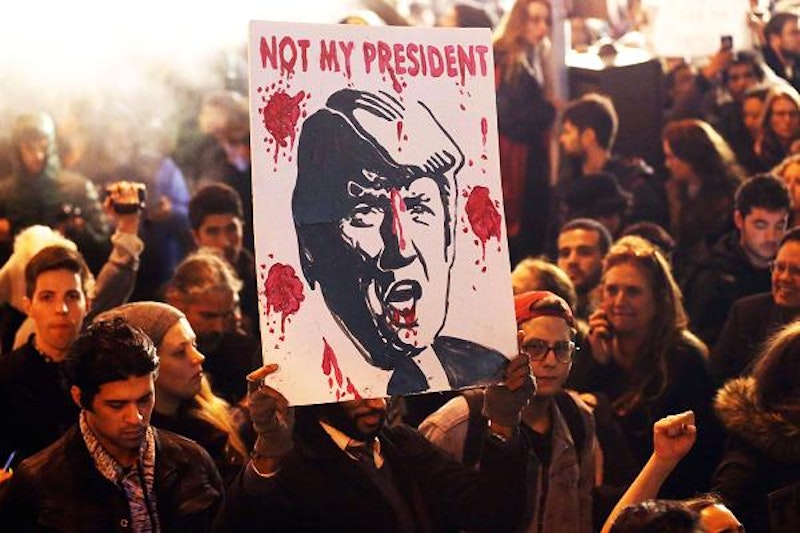 What happens on Jan. 20? Bikers are coming to Washington and so are marchers. The bikers are for Trump, the marchers against. Do we see blood in the streets? If so, maybe the new president will have a good time. He’ll see the footage, the bikers duffing up women with signs, and maybe he’ll say we need more of this. Maybe he won’t. These are the factors one looks at these days. America’s going to become some sort of country in the next four years. How different will it be from now? Well, now’s when we start finding out. What happens Friday with the President and the bikers?

We’re all feeling our way. “Monica Crowley Losing White House Job Shows That the Rules of Politics Still Apply for Donald Trump,” says a hopeful Washington Post. True, Crowley’s down and she was torpedoed by a CNN article. CNN followed this by embarrassing Tom Price, the nominee for Health and Human Services, with an article about his apparent insider trading. The Crowley article appeared days before Trump yelled at a CNN reporter at the President-elect’s first press conference, and the HHS article appeared a few days after he did so. That timing by the network shows an admirable willingness not to be intimidated. Even so, I’m worried.

First, shedding a blonde is the Trump team’s idea of a small sacrifice. Trump’s cabinet picks are faulty too, but the Post article says all but one are expected to be approved. (Nobody knows which one, that’s just the figure the Democrats are shooting for.) Second, coverage of the Crowley fuss omits a key word. Crowley isn’t just a habitual plagiarist, she’s a liar. We’re told that a book she bylined in 2012 included two pages of outlandish spending items allegedly contained in the Obama stimulus package. The pages came from a website maintained by a podiatrist and had been there since 2004. So Crowley stole a big helping of material, but she also told quite a lie—a series of 23 or so, going by my count of the items. None of those had been in the stimulus.

Now that Crowley’s in trouble, the trouble has nothing to do with the lie, only with her laziness. If she’d come up with her own list ($573,000 to study the effects on baby whales of watching films of ballerinas training), she’d be in the clear. One thinks of the fall-out from the vice presidential debate. The Democrats could put together an ad matching Mike Pence’s woebegone denials (“It’s just not true!”) with footage of Trump saying and doing the things Pence denied. But news coverage focused on how well Pence had said his lines. The media and country have already traveled a long way toward the President-elect and his regrettable mind-set. He couldn’t have made it otherwise.

What lies ahead, possibly, is a mind-merge where he becomes omnipresent while the rest of us become more shoddy. The omnipresence is already starting to swell. Meryl Streep, when publicly laying into Trump, erred a little. “We need the principled press to hold power to account, to call him on the carpet for every outrage,” she said. The error’s just that power isn’t a “him.” Except that now it is—no, excuse me, now he is. Trump’s the climate now, the sky overhead. Talk about government or society and you see various abstract nouns—such as power—turn into pronouns. And these pronouns turn out to be Trump. That isn’t a good sign.