Once again revealing they have no absolute principles. 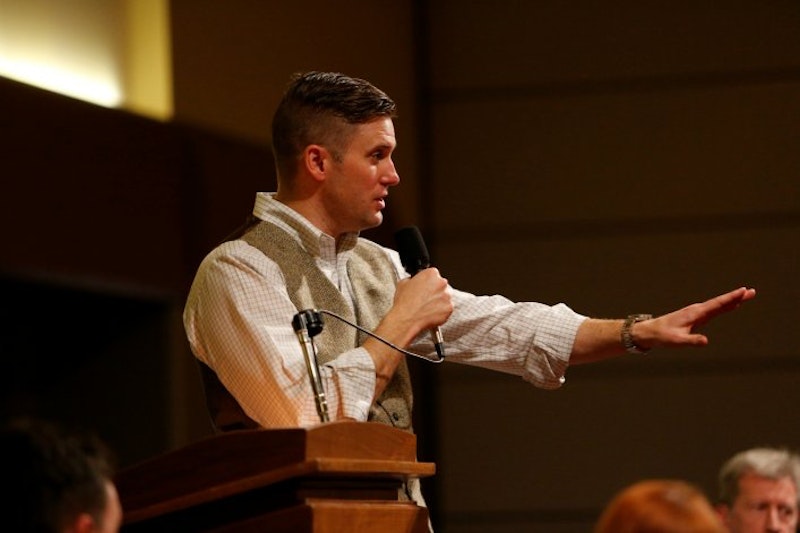 Alt-right figure Richard Spencer got punched in the face on Inauguration Day while giving an interview to an Australian TV station on a D.C. street. It wasn’t a surprise he got punched by what he called an “antifa” (anti-fascist). His face blanketed the Internet after a Hitler-like gathering he hosted in D.C. to celebrate Trump's election went viral, so there was a bulls-eye painted on it on a day when angry youths chanting “eat the rich” and “fuck the bourgeoisie” roamed the capital’s streets in packs, aching to act out.

Spencer put himself in the line of fire on Friday, and he took one for the team. The interesting part was how Spencer’s many detractors reacted to the sucker-punch. Progressives claim to abhor violence in any form, but they offered little introspection on the morality of that blow to the face. The act was immoral, even if Spencer advocates for the peaceful ethnic cleansing on the United States. That person is also legally entitled to attempt to spread his views, as established by legal precedent.

The left treasures Supreme Court decisions. Roe v. Wade is a piece of scripture in its secular religion. Most of them are less familiar with the 1977 U.S. Supreme Court decision that declared that the American Nazi Party had the right to march in Nazi uniforms in Skokie, Illinois, a Jewish-majority suburb of Chicago with approximately 5,000 Holocaust survivors.

Skokie’s residents were concerned about being re-traumatized by the sight of swastika armbands and banners, claiming that such a march would promote hatred against them. The courts involved in the case overruled this objection, not on the grounds that this couldn't happen, but because it wasn't sufficient basis to quash free speech. Their fear involved opening the door to banning swastikas in movies, which could then lead to banning the depiction of cross-burning by the KKK, etc. The village of Skokie also argued that the march would provoke violence, but the Supreme Court felt that caving to such reasoning could then be used to justify the trimming of the rights of civil rights protesters in the South.

Spencer never saw his assailant’s face. The guy scurried away without a word. People laughing at this, or applauding it, are condoning an act of cowardice. An undefended punch to the temple can kill a person. It wasn't like a righteous defender of minorities confronted the white nationalist face-to-face and got so angry in conversation that he hauled off and punched him. That would’ve made for some fine street theater—good guy vs. bad guy.

This is liberalism in 2017. When a white guy whose son is a cop assaults a Black Lives Matter guy because he saw BLM on TV chanting about frying cops like pigs in a blanket, he can correctly say that liberals condone doing the very same thing. When you don't object to political violence of all kinds, you've lost your right to condemnation when the other side does it.

The cowardly attack on Spencer works to the white nationalist's advantage. He currently has 37,000 Twitter followers, making him a blip on the radar screen. He was excluded from the DeploraBall because his extremist views taint the Trumpist brand. Spencer desperately wants to bring his intellect and smooth presentation to bear in ushering his ideas into the mainstream. He needs more attention though. Keep punching him and watch what happens.

Americans are nowhere near ready to go full-Nazi and Spencer’s no threat. Democrats need to think strategically, as they'll have enormous opportunities in the 2018 midterm elections, if Trump flails. They should stop being the party of “feelings” and decide exactly what they stand for. Applauding people like SNL writer Katie Rich, who tweeted that Barron Trump will become the “first homeschool shooter,” makes no sense.

The problem with progressivism now is that it lacks the backbone to stand up for absolute values because of its destructive love affair with identity politics, in which there are no universal truths. It's all a matter of who is saying something. The greater the speaker victimhood, the “truer” their words must be. It gave them Trump. The GOP is in the process of becoming a party that has no identifiable core principles. When interloper Trump gets finished with them, there won't be any doubt about the matter. The Democrats now have the perfect chance to show they’re different.