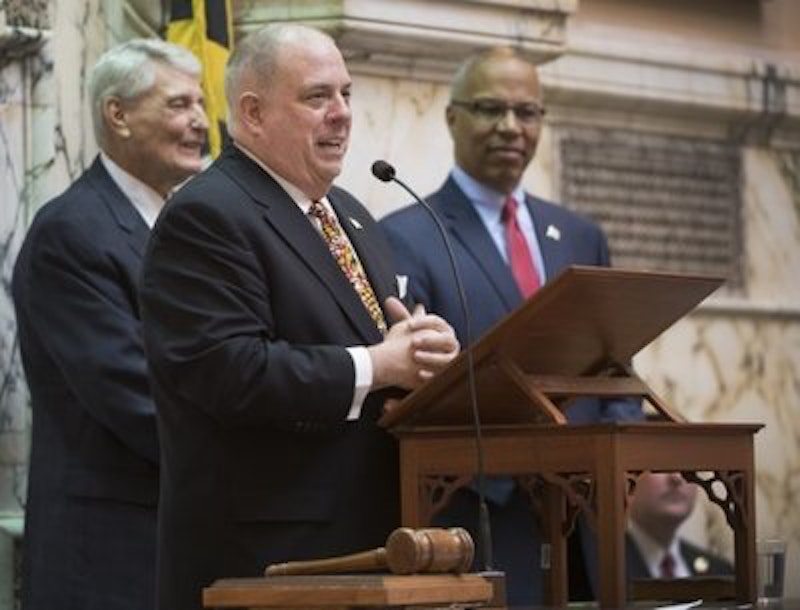 Mandates are supposed to be budgetary shock absorbers. They’re intended to prevent frivolous (and partisan) cuts and to make sure money is spent on programs for which it is appropriated. But like every other legislative shuffle, there’s always a back door out. That pesky accommodation sets up the annual protocol standoff between Maryland’s Republican Gov. Larry Hogan and the top-heavy Democratic General Assembly.

Right up front, Democrats (liberals) feel a certain security attachment to mandates. They’ve been hoodwinked before by diversionary tactics that saw their good intentions go awry. And Republicans (conservatives) view mandates as handcuffs on their attempts to reduce government spending and often as intrusions on executive control. This is especially true in Maryland where the governor has had virtually total control of spending since the state’s executive budget system was adopted in 1917. About 83 percent of Maryland’s budget is mandated.

Mandates came into vogue by necessity in the 1960s and the social spending spree of Lyndon Johnson’s Great Society programs. Billions were appropriated for social welfare programs such as Head Start, school lunches and job training programs. The programs came in two flavors—categorical and block grants. The block grants went directly to the states to administer. And here is where the skullduggery occurred. Mainly in the Southern states, where federal dollars were sent to help poor kids, especially poor black kids, officials diverted the money to build highways, prisons and other local construction projects. After the discovery of widespread abuse of the programs, the federal government slapped mandates on the funds to assure their authorized use. The use of mandates eventually filtered down to the states.

Comes now Hogan, for the second year in a row, with an attempt to undo legislative mandates from several programs after bragging that he had balanced the state’s $43.5 billion budget with a minimum of fuss and a maximum of anesthesia despite a $500 million revenue shortage. He said, upon presenting his budget, that there were no major taxes and no major cuts. The state operating end of $43.5 billion budget is $17.1 billion, which is funded with income, sales and other taxes and fees. The remainder of the budget comprises federal funds and special taxes such as the tax on gasoline.

A second glance tells another story. Hogan wants to unbind from their legislative mandates funds for the long-promised Prince George’s hospital (a legislative trade-off for approval of the MGM casino at National Harbor) and financial aid to Baltimore City. He also wants to impose a freeze on wages for state employees and downsize a prison. The aid money for the city was already approved by the legislature last year. It amounts to $42 million and includes education enrichment and scholarship programs as well as funds for adult education. Hogan’s budget gives with one hand and takes with the other. Legislative leaders have already told Hogan to take a hike.

Yet, by contrast, Hogan remains obsessed with tax relief for police, firefighters, military retirees and emergency response personnel, kind of a special class tax cut that he proposed last year without success.

The problem with mandates is that they stick like Krazy Glue. Every mandate is near and dear to the heart of a legislator, a subdivision or a constituency. Take the Prince George’s hospital, for example. PeeGee and its executive, Rushern Baker, originally voted against establishing a casino at National Harbor, which was a priority of Senate President Thomas V. Mike Miller (D-Calvert). After some serious arm-twisting and negotiating, the county (and Baker) reversed its position in exchange for a major teaching hospital in the county. The casino is up and running, hospital planning is underway and Miller has already said no to a cut in funding.

On the technical end, removing a mandate is no easy task. It is done through a “budget reconciliation act,” which is a lump-sum way of making internal adjustments to the governor’s budget. But each separate piece requires a “repeal and re-enact” amendment, which, translated, means that the existing budgetary funding level must be repealed and new, lower, funding substituted in its place. And this is where Hogan will no doubt lose the mandate fight for the second year in a row.

Hogan is often inclined to pick fights that he knows he’ll lose, whether by philosophy or politics but more likely the latter. Putting up a good but futile fight against free-spending Democrats—especially against downtrodden Baltimore City—only strengthens Hogan’s standing among his conservative supporters outside the I-95 corridor.

Hogan’s budget is no masterwork in fiscal planning—a nip here, a tuck there, no new programs, a two percent cap on tuition increases at state colleges and only a one percent increase in spending. Hogan claims to have raided no special funds to achieve the budget balancing act—a legal requirement in Maryland—a sleight of hand he regularly accuses his predecessor, Democrat Martin O’Malley, of practicing.

Maryland is not as broke as the ministers of influence pretend. There may be occasional shortfalls in revenue projections, and even the unavoidable structural deficits that build up. But when the cash-call is announced, there are untold millions lying around in reserve, rainy day and special funds that can cover the bills.

The reserve fund, for example, is a five percent set-aside that is required by the three major bond rating houses—Standard and Poor’s, Moody’s and Fitch—in order to retain the state’s Triple-A bond rating. This is a remarkable business turn-about. Until the late 1970s, the rating houses represented the buyers of state bonds. But they reversed the equation and now, probably sensing higher, more stable fees, they represent the bond sellers, the states. Last year, the state of Maryland paid the three bond rating houses $625,000 in fees to authenticate its AAA bond rating.

So mandates are only a small piece of this year’s budget, about $82 million that the General Assembly partitioned off last year that represents the spending cuts Hogan seeks. But he’d rather pick a fight he knows he’ll lose than let go of a few nickels and dimes that are destined to do good works and Democrats are going to get anyway along with preserving the mandates.