Life among the Republicans after the “47%” video. 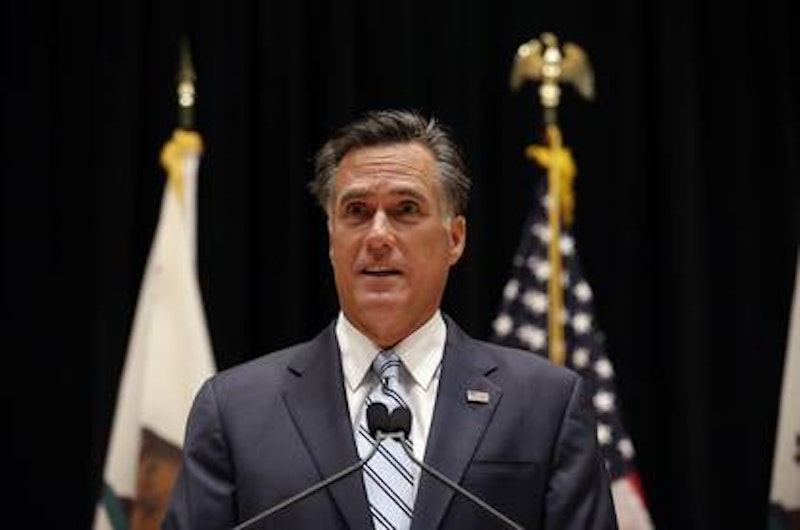 Sen. Scott Brown is asked twice whether he still supports Mitt Romney for president. Brown can't get those precise words out of his mouth. What he does say includes this passage: “Listen, you're going to have to speak to Governor Romney about what his plans are. I'm doing what I've been doing.” Later on, his office has to call the reporter and say the answer is yes, the Republican senator from Massachusetts, now running for reelection, does support the Republican nominee for president. That's the good news for Mitt Romney on Wednesday, the middle of his self-inflicted mess of a week.

Pundits Tuesday. Just the day before, Romney received public advice from two of his party's wise old heads. Peggy Noonan wrote in her Wall Street Journal blog that it would help if other Republicans stood near Mitt Romney, bunched themselves around him, so that the public wouldn't be hit by unfiltered Romney-ness. She had in mind a GOP traveling medicine show, all the big-timers going from campaign stop to campaign stop, showing up together on stage: Marco Rubio and Paul Ryan and Chris Christie. And Mitch Daniels, Susana Martinez, Jeb Bush. Anyone, really, as long as there was a crowd for Mitt to hide in—“a posse,” as Noonan put it. Enough people that you couldn't see Romney's face, just a group shot of smiling conservatives. Noonan wrote the first Bush's “read my lips” speech; she knows about presenting a candidate people don't like. But she figures the best thing to do with Romney is to pretend he's some guy standing next to Chris Christie.

William Kristol, the editor of the Weekly Standard, wrote that Romney could do the decent thing and disappear, dry up and blow away, “step down” and give Republicans “the Ryan-Rubio ticket we deserve!” This was just a passionate aside, though. The piece's main thrust was that Romney is contemptible. That damn video showed him to be as bad as, as bad as—Kristol could not hold back—as bad as Barack Obama. Kristol: “Has there been a presidential race in modern times featuring two candidates who have done so little over their lifetimes for our country, and who have so little [of] substance to say about the future of our country?”

Mondays are a bitch. And there was the start of the week. On Monday morning, the campaign held a conference call to reassure scared donors. That same morning, Politico came out with yet another article on how badly things were going. Headline: “Inside the Campaign: How Romney Stumbled.” The article said the team's key operative, the man Mitt put in charge of strategy, advertising and speeches, was a whack-job flake who screwed up Mitt's big night at the convention. Clint Eastwood and the chair, the acceptance speech with nothing about the troops—this man was to blame. The operative's “mad-professor aura” was mentioned, and “post-midnight calls to sleeping senior staffers,” and also “increasing concern” among colleagues “about what the campaign is doing” to him.

All this before the “47%” video. That news hit Romney late in the day. It was four p.m. and he was in Costa Mesa, California, for an evening fund-raiser. He had spent the afternoon at an FBI building in the city, where he received his first intelligence briefing as a presidential nominee—a heady thing. Then fate had some fun. As Mitt left the building, an aide came galloping at him with an iPad, and Mitt had to watch what he had said.

Next, the emergency press conference, for clean-up. The reporters had all thought the day was over, and they were wearing t-shirts and “blue jean shorts” (the phrase used by The New York Times' Michael Barbaro in reporting the scene). One of them was sweated up from a run but didn't have time to shower. The reason everybody had to scramble, of course, was that the candidate had screwed up.

The only place the campaign could find for a quick news conference was the site of the fundraiser. This was the Segerstrom Center for the Arts, “an elegant modern glass-and-steel building” (Barbaro's words). Apparently the fundraiser had already started. Rich campaign donors watched as the reporters were herded past them. A Romney aide cursed at some of the press for not moving fast enough.

Romney stepped before the camera and did one of his disintegrating-dad schticks, like Dagwood Bumstead trying to hide a colony of ants under his suit. It wasn't funny to watch, Romney never is. It wasn't reassuring either. Romney went to the fundraiser, then went back to his hotel and had dinner alone.

Vegetarian burrito. On Tuesday, Romney got on board his plane and flew to Utah, headed for another fund-raiser. The Washington Post quoted a “campaign fund raiser” who warned that donors “sort of feel that they’re not getting any feedback or any touchy-feely...” An article in Real Clear Politics quoted a “Republican with extensive ties to the party’s fund-raising community” to the effect that Romney was paying too much attention to getting money out of donors, not enough to actual campaigning. “'There’s not really a campaign here,” the Republican said. Peggy Noonan and William Kristol said what they had to say.

Romney sat by himself and ate a vegetarian burrito.