An Angry and Vindictive America Will Elect Newt 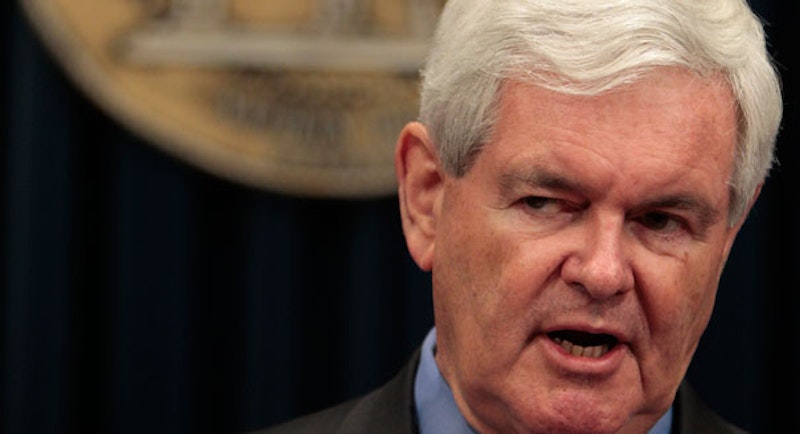 Newt Gingrich will be the 2012 Republican presidential nominee. There’s no going back now. The conservative base has found their anti-Romney and they’re not letting go anytime soon. Iowa is only three weeks away, and with the holidays coming up, Gingrich is in exactly the right place at the right time: double-digit polling leads ahead of perennial pseudo-frontrunner Mitt Romney nationally and in key early states. Gingrich’s infrastructure is shoestring across the board, but if he sustains his sudden surge and watches his mouth (unlikely, but even someone as myopic as Newt has to realize how precarious this race is), he might once and for all allow two-thirds of Republican voters to do what they’ve wanted to for ages: ditch the RINO square.

Gingrich is a far more inspiring candidate than Romney could ever be. He’s “raw and unleashed,” like former prize ponies Bachmann, Perry and Cain, all of whom collapsed once they proved too stupid and lead-footed to work at a Dairy Queen. Newt is smart, wickedly mean, and, if you buy the line, the future of America incarnate. He’s the kind of kid who takes your lunch money, crushes your milk, and rubs your face in the dirt, laughing; and that’s how our country feels right now: Angry. Vindictive. All Wound Up. Gingrich is high-risk but there’s no question he would steer us way rightward, whereas Romney would surely flounder and whisper “present” just like Obama. Tonally, Romney couldn’t be more adrift: he still hasn’t realized that the ineffectual professional square will go nowhere in 2012.

This election is a referendum on the President. Romney hasn’t cracked 25 percent because he’s basically Obama with a different trim—uncommitted and unprincipled when it comes to policy, discouragingly fake and awkward, and appallingly limp-wristed. Base voters want someone who’s as pissed off and openly mean about Obama as they are. Newt’s gross hypocrisies and other baggage will make it Obama’s race to lose, but there is no doubt in my mind that Newt is going all the way. Newt is the contemporary Republican party: greedy, petty, hypocritical, hyperbolic, and out of touch—it just so happens his rickety candor is right on the money this time. He’s the Tea Party incarnate, the logical next step from John Boehner’s no-compromise, do-nothing Congress.

Establishment Republican sweating bullets thinking about a Newt nomination have only themselves to blame, because they made it happen. He’s passionate, radical, and unpredictable—utter anathema to Romney and Obama. If all Republicans want is Obama out of the White House, why bother with the milquetoast clone? Go for the jugular and take back America from all the shit-eating liberal/socialist Babylonian whores in charge. Yes, it’s the behavior of a drunk—reactionary, irrational, self-centered. Sound familiar? Fox News and the Tea Party made Newt Gingrich happen, and now we get to watch. Yay!