No Lincoln, No Douglas, No Debate

Jon Huntsman and Newt Gingrich remind us why politicians shouldn’t be so damn agreeable. 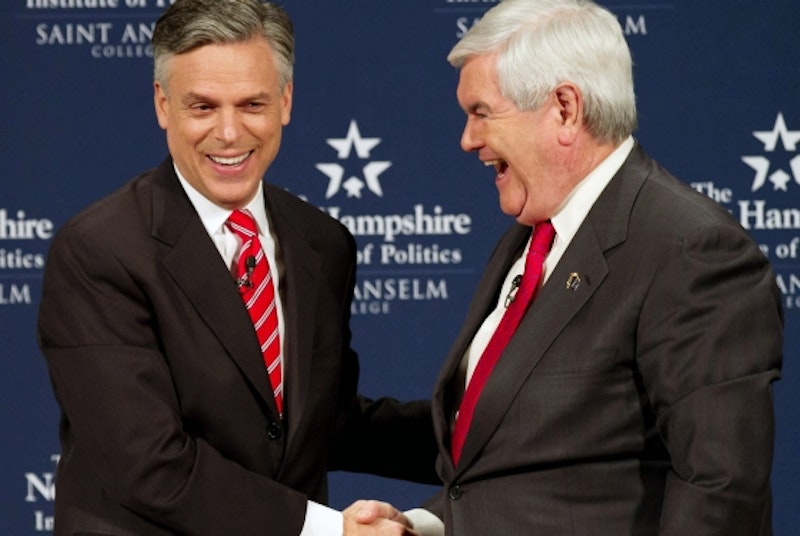 Two men running for president sat down in New Hampshire on Dec. 12 and talked until an audience member fell asleep. After that the two men kept on talking. The men were Jon Huntsman and the redoubtable Newt Gingrich; the sleeping audience member was a Huntsman daughter. The moment occasioned the only display I know of Gingrich charm. “In her defense, she was nodding off while I spoke,” he said, pointing at himself, and Huntsman leaned over to lay a there-you-go hand on his wrist, which in turn caused Gingrich to open his mouth wide for a guffaw. The two men shared the joke.

Press notices panned the debate because the two men found so little to argue about. It wasn’t a debate, really; in fact it wasn’t even an exchange. Consider when Gingrich said Iran, if it had nuclear missiles, might launch them just because it’s run by crazy Muslim fanatics. Huntsman didn’t challenge the statement and didn’t agree with it. The moderator didn’t ask him to do one or the other, or to critique the statement or fine-tune it. It was as if Gingrich had said nothing at all. The non-debate and non-exchange was really a series of candidate op-ed pieces, presented in spoken form and alternating from candidate to candidate.

The occasion, held at Saint Anselm College, was supposed to recall Lincoln and Douglas because it involved just two politicians and didn’t involve special lighting or sound effects. “No buzzers, no bells,” the moderator announced. But that’s as far as things went. The website Politico noted politely that the event “lacked the animating point of the 1858 debates on which it was modeled: a core disagreement.” True. People are so used to griping about the network droids who stir the turd (“Gov. Pawlenty, do you want to repeat that criticism here?”) that we’ve forgotten what debates are for. Disagreement does more than goose the viewers. Ideally it brings out the truth. That’s why lawyers argue in the courtroom. That’s why candidates take issue with each other in public.

There was none of that here. Gingrich said Iran is developing nuclear weapons in underground labs located underneath mosques. Salon says the Brookings Institution and the Institute for Science and International Security are, to put it mildly, dubious. “I don’t know where Gingrich gets this, but it sounds like he is just repeating rumors,” says the president of the second group. Nobody raised such a thought when Gingrich lofted his claim on Monday—not Huntsman, not the buzzer-free moderator.

For his part, Huntsman was urgent about the Arab Spring. “We missed a huge opportunity with the Arab Spring,” he said. “Huge missed opportunity.” An opportunity to do what how? Presumably to transform the Middle East by means of a cogently phrased presidential announcement. But Huntsman didn’t say and nobody asked. He used the same line, with the same absence of backup, about the Iranian Spring when he was taking part in one of the full-candidate debates. That time there was no chance for follow-up because the event was such a crass melee. This time there was a simple lack of anybody who wanted to follow up. As conducted, the Saint Anselm event was based on the idea that a politician, when left unmolested, will tell the truth. Good luck with that.