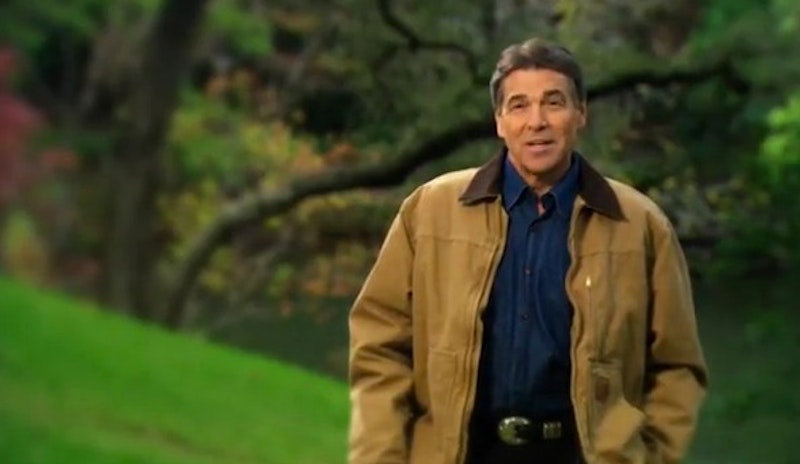 I’m not sure about conservatives in general, but Rick Perry doesn’t understand social media. How could he when he made a video hated more than "Friday"? In a matter of days Perry has managed to obtain more than 575,000 downvotes, which trumps Rebecca Black’s "Friday" by more than double the downvotes. Furthermore, if Perry was hoping to garner support through the Internet, gay bashing was hardly the way to go about it. If Little Ricky was just crying out for attention, it might bite him in the ass later on.

There’ve already been numerous remixes and parodies of Perry’s video “Strong,” which went up Dec. 6, and while in some cultures it might be viewed as flattery, in Ricky’s case it was far from that. Case in point: the last thing you want to do while spreading the hate towards your fellow [gay] humans is wear a jacket that looks like it came from Brokeback Mountain. You just can’t do that in this great information age and hope nobody calls attention to it. I’m sure there are more positive ways to criticize Perry’s blatant attack on gays, but the rough & tough Texan, like any bully, refuses to listen. So I consider the negative backlash Perry’s received as a small dose of his own medicine. However the only thing Perry’s camp can understand after receiving so much negative publicity is that they might be able to whitewash it if they disable ratings, comments, and responses on his future videos. Essentially this is Perry crawling back to his vehicle with his tail between his legs.

The music in Rick Perry’s video was from the gay composer Aaron Copland. This just makes you wonder if Perry dealing is with latent homosexual impulses. With Perry’s campaign in tatters, I have to wonder if this guy is serious or trolling harder than Herman Cain. What’s next? Declaring the Holocaust never happened? He’s already admitted that he views the bible literally.

I find it hard to take this Texas PTA reject seriously. I’d take Cain more seriously if he were still running. I’d even ignore all the blatant nerd culture rip offs made political policy... for a while. The Republican Party is really picking some winners, and have left voters little to choose from. The selection is more redundant than Pac-Man music.

Does Perry really think declaring that he feels something wrong about “gays” openly serving in the military will gain him support? Why is it even an issue? Straight people can openly serve in the military, why not the other side? The United States has bigger, more important matters to deal with first; like the budget, for example. If Perry thinks he can make a video like “Strong” and hope it goes away by getting two vets to call him “honorable” in a series of videos, the voters really need to re-examine why they think he would be good for this country.