Bernie or Bust people are irrelevant. 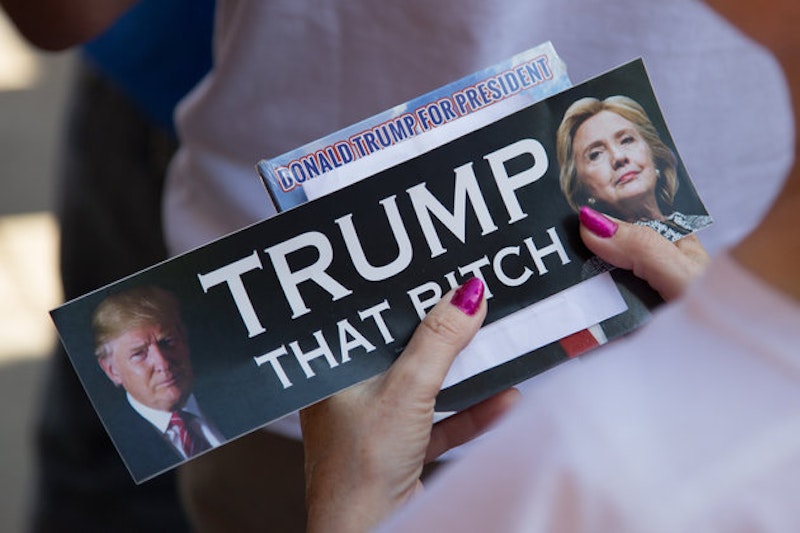 It’s impossible to overestimate the effect that sexism will have on the election this fall. I’ve eavesdropped and been a part of dozens of conversations where people give Donald Trump the benefit of the doubt “because he hasn’t killed anyone,” while Hillary can’t be trusted because she allowed, maybe even wanted, our Americans to die in Benghazi. As with the ongoing unencrypted email scandal, there’s a thick scrim of “Women can’t be trusted to lead or operate the country” going on there. I voted for Bernie Sanders in Maryland’s primary last month, mostly because I knew it would be my first and last chance to vote for the guy. A lot of these “Bernie or Bust” people don’t pay attention to politics regularly, and they’ve never encountered the pragmatism that’s necessary in keeping someone like Trump out of the White House. Splitting hairs about whether or not Bernie is problematic for supporting Israel and Pentagon Kill Lists isn’t just silly; it’s counterproductive and a waste of time. No candidate for president is perfect; no politician is perfect. But if you lean left, wouldn’t you agree Bernie is the closest we’ve seen in a lifetime? Can’t you look the other way when it comes to Israel? I mean, he’s Jewish, what the fuck do you expect?

Clinton is hobbled by both sides: bitter Bernie supporters who resent the DNC and Debbie Wasserman Schultz for favoring Clinton from the start with a severely shortened debate schedule; and people on the right buying buttons in bulk that read “Life’s a Bitch—Don’t Vote for One." Most people don’t know much about her email server or the details of what exactly happened in Benghazi and how she was involved. But it’s such a convenient way to couch the notion that a woman—especially Hillary Clinton—should never be president of the United States. For Politico, Josh Zeitz points out that “Trump is also wildly unpopular. But people tend to forget that Reagan was hardly more trusted when he unseated Carter than Trump is today—and that year, voters chose the candidate who represented a break with the status quo.” I don’t think the Bernie or Bust crowd is big enough to swing the election, because when confronted with the 50/50 reality of President Trump, most consistent Democrats will vote for Clinton even if they don’t like her. What scares me is how sexism and a decades-long distrust of Clinton will come in to play this fall. Let’s just stick with the status quo. I don’t want Trump’s finger on the button. Even if Hillary keeps Guantanamo open, at least she knows how it’s run.