Trump and the NRA Are Perfect Bedfellows

At least until the presumptive GOP nominee changes his mind again. 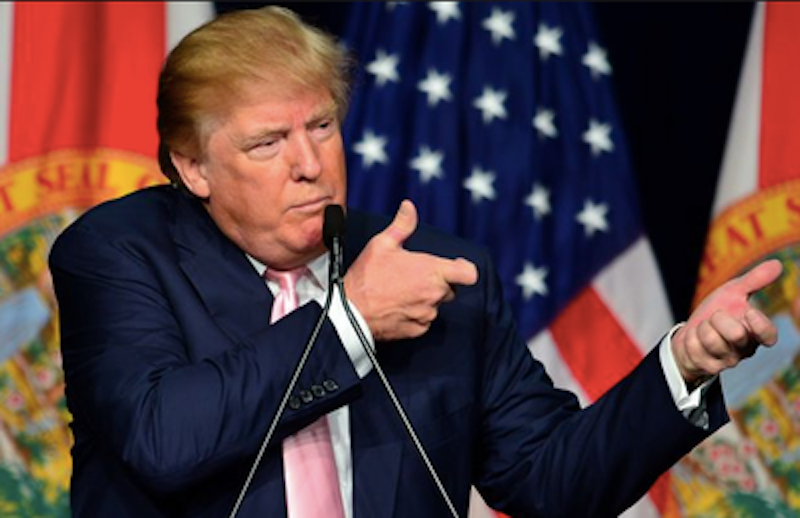 Donald Trump let it slip ever so deliberately that he always wears a bulletproof vest. Usually those who require such armor-plated wardrobe accessories do not spill the beans for fear of alerting a would-be assassin to aim for the unprotected head instead of the protected heart. But the Kevlar Don’s admission is curious for another reason: If he’s so concerned for his life that he wears special repellent undergarments, why is he such a staunch defender and promoter of gun merchants such as the NRA whose lethal product he protects himself against.

Consistency is not Trump’s strong suit. Nor is it the National Rifle Association’s. They both have contributed to making fact-checking a 24/7 occupation just to keep pace with the shifts and contradictions. Maybe that’s why Trump and the NRA make perfect bedfellows. It was a week ago that the NRA rolled out a bravura endorsement of Trump for president amid alternate volleys of cheers for Trump and boos for Hillary Clinton at a forum of thousands of NRA members in Louisville. And it was before the same audience that Trump revealed, with his customary stream-of-consciousness bombast instead of pinpoint accuracy, his epiphany from gun control advocate to Second Amendment commando and gun owners’ new best friend.

Trump’s line of attack was not to delineate a plan of his own but to denounce Clinton and Democrats as gun-grabbers who’d “abolish the Second Amendment… [and] disarm vulnerable Americans in high-crime neighborhoods.” At Trump’s side, providing a nodding echolalia, was the NRA’s human trumpet, Wayne LaPierre, adding, “You can kiss your guns good-bye” if Clinton is elected and Democrats pack the Supreme Court.

Earlier in his campaign, Trump told a Tennessee audience that he has a permit to carry a concealed weapon in New York and lately he’s called for a “national right to carry law” whereby a concealed carry permit from one state would be recognized in every state. Trump has also expanded his recent embrace of gun rights to include armed teachers and students in classrooms.

By now, Americans can recite the facts and figures: the FBI estimates that there are more than 300 million guns in private hands in America; about 33,000 Americans are killed every year in gun-related incidents; the NRA brags that it has more than three million members; the NRA is supported by and is an agent for gun manufacturers; in the 2014 election cycle, the NRA spent $3.3 million on lobbying and made $984,152 in campaign contributions, the bulk of it to Republicans.

For more than two centuries, the Second Amendment has lain as dormant as the dead men who drafted it, untouched, uncontested and examined only by scholars and jurists who enjoyed intellectual debate over a curiously placed comma that has rendered the amendment a hopeless mish-mash of opinion. Even the self-declared originalist, Justice Antonin Scalia, argued in the District of Columbia vs. Heller that the Second Amendment has its limits, leaving room to regulate some types of firearms.

And for decades, the two major political parties and their candidates as well as the White House and members of Congress—and even the NRA—avoided any discussion of guns or gun control for fear of a court test of the Second Amendment. But this year, the issue is front and center and it’s been placed there by Clinton and her drawn-out effort to dispatch Sen. Bernie Sanders as well as by states that have enacted gun controls independently of Congress following mass shootings. Sanders has a spotty record on gun control because he represents Vermont, a largely rural state with a strong gun culture.

The lines on the variations on gun control from background checks to outright bans are cleanly drawn between Trump and Clinton and will carry over into the general elections and no doubt the party platforms. Clinton has been unable to put away Sanders but Trump has shed the prefix presumptive and has surpassed the requisite threshold of 1237 delegates and is now the actual Republican nominee. Clinton, meanwhile, faces a possible humiliating loss to Sanders in California that could further weaken her eventual nomination and general election candidacy.

Trump, presumably wrapped in his Kevlar vest, was quoted in The Washington Post as telling the NRA audience that “heartless hypocrites like the Clintons… want to get rid of guns, and yet they have bodyguards that have guns. He called on the Clintons’ bodyguards to “immediately disarm… and let’s see how they feel walking around without their guns and their bodyguards, in the meantime, nobody else can have guns.” Not to mention, of course, that Trump, too, is guarded as well as encapsulated in a protective layer over his thin skin.

In the past, Trump supported gun restrictions of varying degrees on different occasions and circumstances and accused Republicans of toeing “the NRA line and refuse even limited restrictions.” Now he was quoted as telling the NRA forum that, “My sons have been members of the NRA for many years and they’re incredible—they have so many rifles and so many guns, sometimes even I get a little bit concerned.”

The NRA, until the 1980s, was mainly and organization that specialized in gun safety and education. But it has evolved into an advocacy group for gun manufacturers and one of the most powerful and feared lobbying associations in Washington. It has an annual budget of $27 million. The NRA’s hallmark is its staunch defense of the Second Amendment which it considers inviolate. Except when the NRA does its own editing.

The original Second Amendment was so poorly drafted, presumably by James Madison, that it was rewritten by Thomas Jefferson—for many, the intellectual measure of the presidency—and still falls far short of lucid grammatical acceptance. And, for the record, nowhere in Madison’s notes or remnant papers is there a mention of individuals stocking personal arsenals or being armed to the teeth as a matter of personal protection or other menacing intentions. By today’s standards, an NRA approved self-defense arsenal might include a bazooka or a tank.

So what is so sacrosanct about the Second Amendment that it can’t be abridged, or even repealed, for that matter? Nothing at all, really, except the NRA’s money and purchasing power of a vendible Congress. Other amendments, even the freedom that is more precious because it’s the First Amendment, have been appealed, challenged, reviewed and re-interpreted many times over. Polls have repeatedly shown that voters favor stricter controls on gun purchases and ownership. Trump ought to consider that the next time he slips into his protective garment. Maybe he’ll change his mind—again.