The new GOP governor takes measure of his opponents. 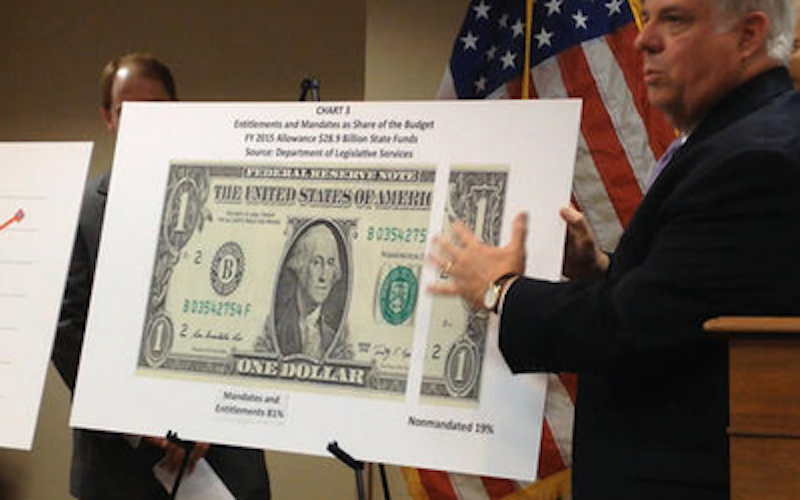 This is the way the legislature ends, not with a bang but a budget dispute. The protocol standoff between Maryland’s Republican Gov. Larry Hogan and the heavily Democratic General Assembly has been more about policy than money. They have the bucks; the question is how to spend them.

Gesture politics is at the center of the debate. For Hogan, the budget is about keeping campaign promises to reduce taxes. For Assembly Democrats, the spending program revolves around greasing the party’s labor union base of teachers and state employees. The final few days were spent tweaking the $40.5 billion spending plan to accommodate Hogan and facilitate passage.

Hogan originally submitted a budget that pulled back on education spending and contained no new money for state employees who’ve been shortchanged for years. Instead, he advanced several piddling tax breaks that, to many, made no sense in a soft economy—tax exemptions on pensions for first responders and veterans, repeal of the scheduled gas tax increases, repeal of the rain tax, niggling small business tax breaks and most egregious of all, tax breaks for corporations that make donations to private schools.

But Assembly fuss-budgets had ideas of their own. They scuttled many of Hogan’s tax notions, scrounged and scraped through the budget until they found enough money—$203 million—to adequately fund education and give state employees pay raises. House and Senate eventually reconciled their minor differences and the fusion budget was declaimed a masterwork of bipartisanship.

The euphoria lasted a week. Hogan still had those pesky campaign promises to keep, so he countered with three supplemental budgets that revived, in one form or another, many of his original tax cuts, the most controversial remaining the donations to private schools and the cuts to school funding. He also restored $75 million to obliterate another pension fund raid by the legislature. The result: Stasis, a favorite conservative word that means stagnation or standstill.

So Hogan took the showy but not unusual step of putting pen to paper that would extend the 90-day session beyond its Monday night conclusion if no budget was adopted. Enactment of a budget, the citizenry should be reminded, is the only Constitutional requirement the General Assembly has. Much of the rest is wallpaper.

The conclusion is unsettled as to whom the joke is on. By law, the governor is not required to sign Maryland’s budget, though he may as a matter of theater. Ultimately its enactment by the General Assembly automatically sets the budget into law and action. And don’t even think about line-item vetoes. The governor only has that stroke-of-a-pen power over the capital budget but not the operating budget. But the budget can’t be approved without Hogan’s consent and reconciliation.

And understand another fine point: Maryland’s total operating budget is about $40.5 billion and not the $16 billion you keep reading about. The $16 billion is the state’s general fund share of the budget. The remaining $29 billion comprises federal and special funds (gas taxes, fees, etc.).

Here’s where the fight originates and the parties diverge. Maryland has what is known as a program budget. Through it the governor states his policies and social goals by inclusion or exclusion and through levels of funding. But a governor’s political impulses are checked because 80 percent of the budget is mandated and the legislature’s instincts are balanced because it can only cut funds and not add or shift money. To undo, or un-mandate, programs requires an exercise of legislative ju-jitsu.

Through it all, Hogan, intentionally or not, appears to be making a direct assault on public education. He has short-changed funding for education; he has sponsored measures to expand Maryland’s charter school system; he favors corporate donations to private schools. And he does so at a time when Maryland’s public school system—emphasis on system, not schools—has consistently ranked among the best in the nation.

Hogan is resisting the legislature’s shifting of money to fund education and pay raises. He prefers tax breaks as a way than slipping money into people’s pockets instead of putting it there directly and having it taxed so that part of it goes back to the treasury.

Beyond the skirmishing over the budget, the 2015 session has been noteworthy for its lack of fireworks and the absence of tension that was often below the surface but an intimidating presence nonetheless under the immediate previous governor, Democrat Martin O’Malley, now a tentative candidate for president.

Such an accommodating atmosphere was anticipated with a newly elected governor, though no stranger to the State House, and a General Assembly with more than 60 new members. But more to the point, Hogan brought with him as an agenda little more than a portfolio of tax cuts that he had developed over the years as leader of an advocacy group, “Change Maryland,” which, as many had expected, transmogrified into his campaign organization.

Hogan, again following through on campaign pronouncements, avoided the traps and pitfalls of other Republican governors, albeit in GOP states. He deliberately veered away from social issues—the so-called God, guns and gays agenda—that obsess the right fringe of the Republican Party. Hogan allowed the issues to remain dormant mainly because, as he stated and agreed, they are settled and established law in Maryland.

Following the lead of their governor, the expanded Republican caucus in the General Assembly has largely remained silent on social issues as well—again, a departure from the O’Malley years when the GOP minority vociferously opposed the liberal laws that O’Malley sponsored and pushed through the legislature. Put another way, Hogan and his allies in the Assembly deliberately kept quiet to avoid embarrassment and repudiation at the hands of the majority Democrats.

What’s more, Hogan must ever be mindful that while he won 20 of Maryland’s 24 subdivisions, three of the four that he lost are the most populous and powerful in the General Assembly as well as in the state’s political pecking order. If reelection is on his mind, his eyes must be on the map. So for Hogan, the rookie governor, the 2015 session was boot camp. Perhaps he has learned the extent of executive authority as well as its limits.