Hillary Does a Jewish Voice

The president-in-waiting tells us a story. 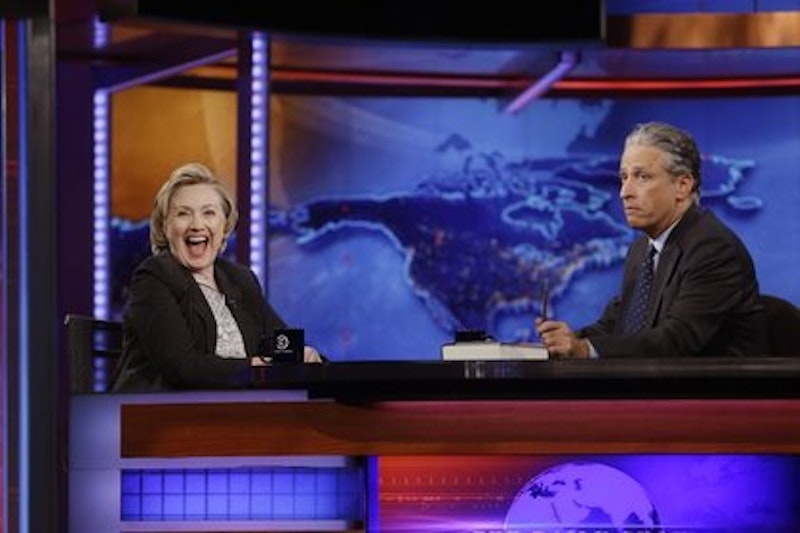 Hillary did a Jewish voice during her interview on Jon Stewart’s show. Kind of a standard Protestant-tries-Jewish thing, with the rising inflection: “Such a recent conflict?” You could throw in “yet.” Hillary prefaced the line by noting that the speaker was somebody in the audience at Hebrew University. Then the line, the inflection. It's a small jolt, actually. I can't remember the last time I heard a secretary of state do a Jewish voice.

A few years ago people landed on Hillary for talking Southern at some public event in or near Arkansas. They said she would fake anything. Not really. I think she's like a lot of us: she likes doing voices. I expect there're a lot of book-learned nerds who have listened to Monty Python records or The Goon Show and decided they had a flair for this stuff. We're not good at dancing, and we have to do something acrobatic, and our mouths are about as physical as we can get.

President Obama is another voice-doer, but with better skill. He's by way of being an athlete, what with the basketball, and more at home with the instrument. He's in touch with his body, pretty much. Hillary and I really aren't. We're more the common flock of strivers, entertaining ourselves and hoping some of it works. You'll see us at parties, possibly doing a good enough business in a stray corner. The other night you could see one on The Daily Show.

Hillary shouldn't do voices, or at least not often. When discussing Israel, she should get in the phrase, “Israel is absolutely right” (about not sitting by while missiles are shot at them), and when Stewart talks about the implications of certain U.S. behavior, she ought to say, regretfully, “Well, Jon, I don't agree with that for a couple of reasons.” She should nod her dainty profile in a full sickle of an arc, so that the nod continues all the way to her clavicle. She should do this over and over, throw it in like a tic. While she's doing it, her gaze should never break; her eyes should stay on the other speaker.

She does all of this and seems happy doing it. Hillary is not a tortured automaton-nerd like Al Gore. She isn't trying to pass, to fake her way into normalcy. At times she doesn't make sense, but it's okay. Talking about America's mission, what we're here for: reason tunes out and people sign on for a few minutes of limbo, the happy time. Hillary says that America's mission depends on the State Department sending out Lou Reed to make an impression on Vaclav Havel, but the State Department never sent out Lou Reed. His music got where it was going all on its own.

“We have not been telling our story very well,” she says. “We do have a great story. We are not perfect by any means, but we do have a great story about human freedom, human rights, human opportunity. And let's get back to telling it—to ourselves, first and foremost, and believing it about ourselves—and then taking it to the world. That's what we should be standing up for.” Rhetorically, this bit is the centerpiece of her Stewart appearance, and it's clever. This thing about the “story” is so vague that it can take in redressing the balance with Wall Street. In practice, though, all Hillary has in mind is for America to mount a p.r. campaign for itself, like we did during the Cold War. And she says she wants to tackle “a very difficult situation in our executive branch. I think if President Obama were here, he'd be the first to say it hasn't kept up with the times. We don't have the agility or flexibility or technology.” She doesn't finish the sentence, because why bother?