The Real Meaning of Columbusing

Christopher Columbus was a monster. 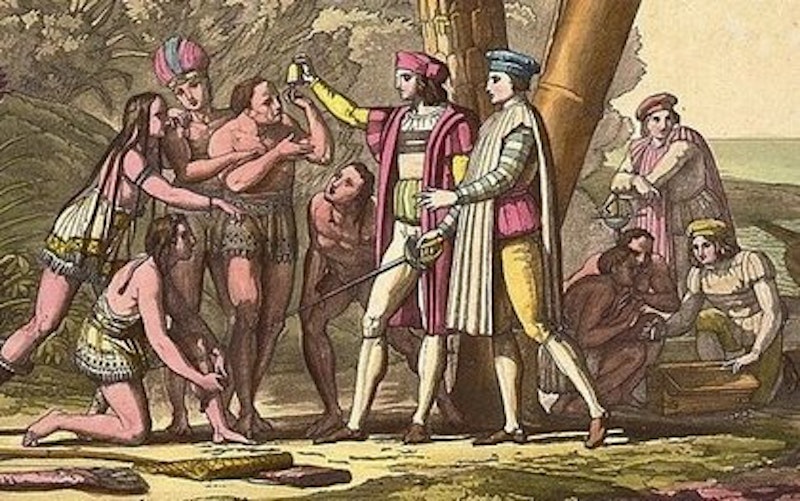 To Columbus. It's a verb meaning to discover something (especially if you're white) that’s already been discovered.  The term was coined by College Humor last month, and it's useful. Miley Columbused twerking; Elvis Columbused rock ‘n’ roll; Richard Burton Columbused the source of the Nile; the protagonist in that College Humor video Columbuses a mostly non-white bar. Columbusing—everybody's doing it.

Still, for all its benefits, the term is also a bit misleading. "To Columbus,” suggests that the funny/icky think about Columbus was cultural appropriation. The problem with Columbus, "Columbusing" tells you, is that the guy, Columbus, took credit for stuff that he didn't do. And taking credit for something that you didn't do is unpleasant, there's no doubt. But it's not really as unpleasant as murder, slavery, torture, and genocide. Which is what "Columbusing" should actually mean if we wanted to be honest.

Christopher Columbus, the great explorer, is one of the monsters of history. That's not because he claimed to discover something that he didn't discover. It's because he was a vicious, evil murderer. When he first landed in the Bahamas, Columbus met the Arawak Indians (or the Taino), and commented on their generosity and friendliness. He also ominously said, "[T]hey would make fine servants.... With fifty men we could subjugate them all and make them do whatever we want." And sure enough, right off the boat he kidnapped a number of them and took them back to Europe.

Most of the kidnapped Arawaks died from disease and mistreatment, but Columbus was not deterred. He returned to the Bahamas, determined to get precious metals. He commanded all Arawaks over 14 to bring him a quota of gold every three months. Those who didn't were, according to Columbus' son, "punished by having their hands cut off," and left to bleed to death. Since there wasn’t much gold in the Bahamas, few people could bring Columbus what he wanted. Some estimates suggest that the Spaniards, in their greed, maimed and killed as many as 10,000 people.

Historian and priest Bartolome de las Casas recorded additional atrocities. The Spaniards turned their hunting dogs loose to tear Arawak apart; de las Cases says "Arawak babies were killed for dog food." Children had their legs cut off when they attempted to run away; some Arawaks were roasted on spits. Columbus rewarded his men for their services by giving them Arawak women and girls of as young as nine and 10 years old to rape.

Thanks to these atrocities, Columbus is believed to have reduced the Arawak population from eight million people to around only 100,000 in just a few years. No doubt some of these deaths were from disease, but given the evidence of Columbus’ widespread spree of murder and cruelty, it’s fair to call this a vicious genocide. Columbus' crimes were so glaring that he was arrested and sent back to Spain, where he was convicted… only to receive a royal pardon.

Ideally, then, "to Columbus" would not mean, "to claim to have discovered twerking." It would mean, "to enslave people and amputate their hands," or "to rape 10-year-olds," or, more generally, "to commit a genocide." Columbus shouldn't be a cute term for cultural appropriation; he should be a synonym for Hitler or Stalin or Pol Pot.

I don't mean to dismiss the problem of cultural appropriation altogether. People borrow from each other all the time, and that's not a bad thing. Unless, as Brenda Salinas notes, you borrow only bits and pieces while continuing to indulge in racist contempt for the people from whom you're borrowing. "It seems like a paradox to relish your fajitas," Salinas says, "while believing the line cook should get deported."

The issue then, isn't cultural mixing, but cultural mixing in a context of racism and systematic disproportions of power. And the irony is that the term "Columbusing," which is supposed to highlight those disproportions of power, actually works to erase them. Columbus isn't a hero; he's not a joke. He's the genocidal rapist and murderer who our government has decided to honor as the iconic founder of our country and polity. Imperialism may work in part by giving people credit for things they didn't do, but it works even more insidiously by conveniently forgetting to give people credit for the unpleasant stuff they did. Maybe that's really what "to Columbus" should mean—to forget the atrocities you've committed so thoroughly that you don't even know when you're joking about them.