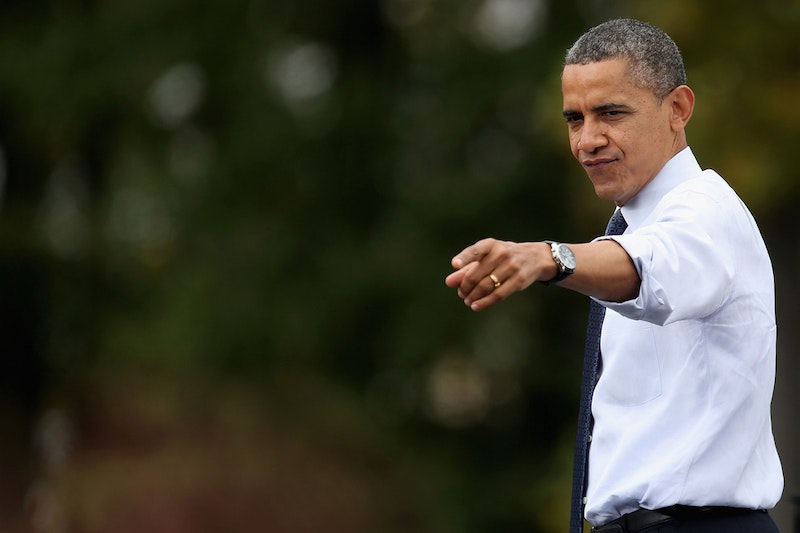 November 28, 2014: The President devotes the entirety of his weekly video address to an impassioned demonstration of his proficiency on the electric guitar, regaling the nation with selections by Woody Guthrie, Neil Young, and Yanni.

January 31, 2015: While campaigning for local Democratic candidates in an open-air drug market in Detroit, the President encounters a tearful young man slinging crack on a street corner. Acting against Secret Service advice, the President approaches the man, engaging him in conversation. It seems that the dealer’s first daughter is being born, right now, but the dealer cannot leave his corner for fear of being fired and he’s unable to gamble with the job. An empathetic Obama agrees to spell the dealer “for a couple of hours, tops.”

March 19, 2015: The President is accepted into the Ceramic Arts MFA program at Columbia University.

April 1, 2015: Obama disappears into the bowels of an Amsterdam hash bar for an uncomfortably long 37 minutes.

July 20, 2015: After congressional Republicans successfully repeal Obamacare, the President rushes into the chamber and dumps a massive cooler of ice and water over the head of a startled John Boehner.

August 25, 2015: The President graciously fills in for a flu-stricken Bill Cosby on a string of Baltimore headlining dates, copping the Cos’ idiosyncratic cadence for a bizarre, electrifying rendition of Eddie Murphy’s “Delirious” routine.

June 16, 2016: Donning leis and a Hawaiian shirt, a punchy Obama blows off an emergency international conference to join Matthew Broderick atop a Chicago parade float. The pair perform a karaoke duet of “Danke Schoen.” Afterwards, during an impromptu press conference with local media, the President insists that he is in actuality Reggie Brown, a professional Barack Obama impersonator—a lie complicated by the fact that the actual Reggie Brown is, at that moment, entertaining a wealthy group of Republican donors at a well-publicized, $400,000 a plate RNC fundraiser across town.