Michael Wolff continues to draw scorn from the High Ambassadors of journalism. Why? He doesn’t care what anyone thinks about him. 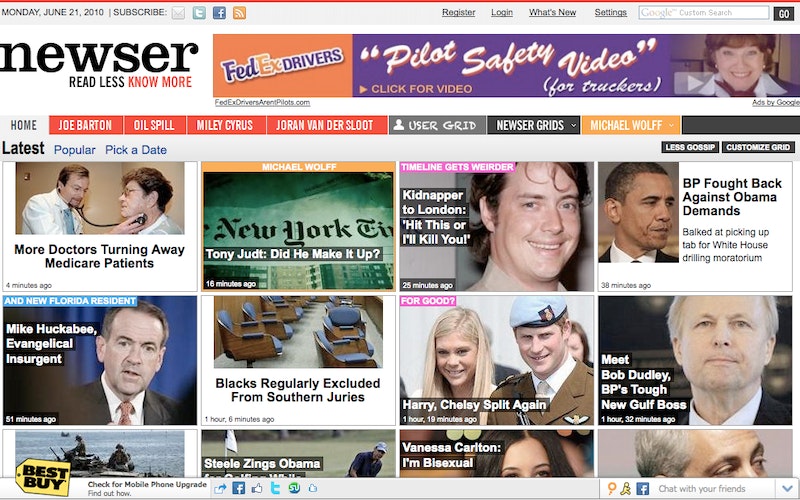 By now it’s an unremarkable fact that men and women in the media—print, online, broadcast—are regarded by the American public with roughly the same disregard as politicians, wealthy financiers and lawyers. What I find odd, however, is the viciousness directed at Michael Wolff, the frontman of Newser, Vanity Fair columnist and Rupert Murdoch nemesis/booster, within the relatively small world of journalism. Granted, Wolff is not a stereotypical glad-hander, and doesn’t care who he pisses off within the gated Beltway media establishment, but you’d think that at the least, fair-minded people would accord him grudging admiration. Instead, he’s considered a nuisance, a Murdoch toady, a business failure, and a loathsome leper who refuses to acknowledge his lowly status, which would be a schnorer with a keypad.

Anyone who writes for a living inevitably picks up a sacred cow or two along the way—people or institutions that are off-limits from criticism—but it’s a mark of distinction if a close reader can’t discern who or what a journalist protects. I’ve followed Wolff’s refreshingly eclectic career for well over a decade, and honestly can’t come up with even one person who’d qualify as a sacred cow. Barry Diller, maybe? At least on and off, when he’s looking for financing or exclusive interview access for a book. But maybe they can’t stand each other; I just don’t know.

Wolff’s website is not one of my favorites: its stifling aggregation is useless to me (as is The Huffington Post, The Daily Caller and The Daily Beast), since by the early morning I’ve already digested The Wall Street Journal, Real Clear Politics and ESPN, and have zero interest in the majority of what clutters Newser’s homepage. Looking at Newser just after 1 p.m. on June 19, for example, I’d never click on these showcased links: “Chelsea Clinton Details a Big Mystery,” “7 High-Profile Missing Movie Props,” “Girl’s Murderer: Cold, Calculating,” “BP Used Cheaper Well Design in Gulf” or “Clinton-Era Emails Show a Political, Blunt Kagan.” I’ve already read the latest on the BP disaster, keep up with the Kagan proceedings and don’t give a hoot about Chelsea Clinton.

Yet what compels me on weekdays to call up Newser is Wolff’s short column: which is, by turns, daring, goofy, irreverent, prescient, lazy and hilarious. Unlike the vast majority of journalists, Wolff isn’t afraid to be proven wrong, taking the journalistic equivalent of trying to hit for a .300 batting average. That Wolff has no shortage of ego doesn’t put me off (it’s a tic of the trade), and sometimes his self-regard might—might—not be serious. In yet another column about Murdoch and the septuagenarian’s insistence that readers pay for his product, Wolff shines up the excellent Brit journalist Rod Liddle, saying, “I’ve said this before: Liddle might be the one columnist writing in English who, I might admit, does this job better than me.”

Last month Wolff caused a stir within the industry for his brutal attack on Jonathan Alter, the veteran Newsweek columnist and frequent television presence. I happen to believe Wolff was performing a public service, for Alter is a prime example of why people hate the media, but his clubby circle closed ranks and called Wolff out for being, well, an asshole. Wolff’s Newser column was provocatively headlined, “Who Killed Journalism? Jonathan Alter?” and simply decimated a man who truly is, in Wolff’s words, a “condescending prick”

He wrote, after obligatory swipes at the tabloid ethos prevailing today, and Fox News: “But there is another side of the journalism wars that has not received its due amount of blame for the debasement of the culture and the imminent death of the business: that’s the rise of the self-serious, stuffed-shirt, bloviating bishops of the profession. The transformation of the news business from the province of hacks and writers into a redoubt, via cable TV, of would-be public intellectuals is an example of personal brand building run amok.”

Alter was furious, and sputtered in an email sent to Wolff (which, at least to me, recalls his embarrassing performance on MSNBC on election night in 2000, when, probably amped on herbal tea, gave a lunatic’s version of why Al Gore deserved the presidency regardless of the Electoral College), that his attacker has a “barren and ugly mind” and that no one reads Newser. Eager to spread what he considered a witty riposte, Alter cc’d the world, including Gawker, which naturally took the bait and didn't take sides, added this: “Ha. Of course many of Alter’s criticisms of Wolff are valid, but he neglects to take into account the fact that Michael Wolff forms 90% of his opinions based solely on what he thinks will get him more Twitter pickup that day.”

That Gawker, which popularized the website practice of paying writers by how many views their stories receive, and spit out those who can’t deliver, criticizes Wolff for “Twitter pickup” is pretty funny, although perhaps unintentionally so.

I asked Wolff about some of the criticism hurled his way, and the charge that he trolls for traffic, and he emailed this response: “I may have some natural affinity for statements that draw traffic because I like to try to find the obvious thing that nobody is saying—because they’re too polite, or intimidated, or because, like most journalists, they lack a sense of humor. At the same time, I find that writing a column—even a short one—every day means you don’t have a lot of choice about what you’re writing about: you’re grateful for any idea, big traffic or little traffic. If I were smart, I’d stop writing about Murdoch. Turns out—I know this from book sales as well as traffic analytics—nobody is much interested in him. He’s just too unsympathetic, cranky, ugly. But he’s my whale.”

Not all of Wolff’s columns are appealing: he dives into the cesspool of celebrity scandal too often for my taste, trying to differentiate his take from the tabloids he may or may not deplore (your guess is as good as mine) with an Important Point. Such was the case last week when he wrote about the Al/Tipper Gore split-up, a topic that’s about as noteworthy as the latest Baltimore Orioles loss. Here’s the gussy-up: “That’s the joke: Politicians are ordinary fools. Curiously, this leveling or reduction may deal a big blow to scandal. If we believe all politicians are having affairs, there’s no story.”