God Is My Constituent 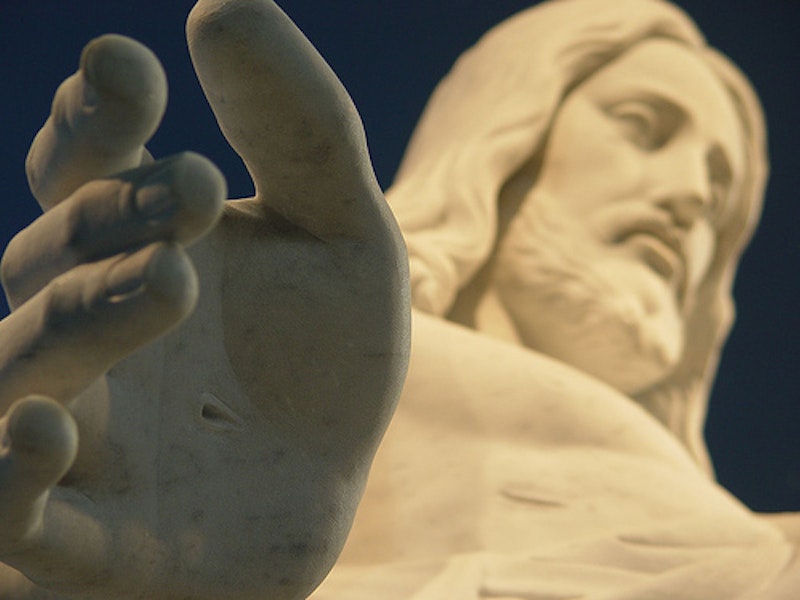 Gov. Jan Brewer has been in the news a lot lately, mostly for the controversial immigration bill she signed into law, but also because of a spate of new measures put into effect in Arizona. One of them in particular, redefining a “dependent” to exclude domestic partners, seems to be motivated by her Lutheran beliefs. It effectively revoked benefits from hundreds of unmarried same-sex partners.

The move is calling into question the role of religion in politics and calling attention to comments that Brewer made last year, claiming that God had chosen her to govern Arizona. In a speech to a group of Lutheran ministers, Brewer said:

And I firmly believe that God has placed me in this powerful position of Arizona's governor to help guide our state through the difficulties that we are currently facing.

Brewer is hardly the first to claim political intervention by the Big Guy. She joins other GOP luminaries like George W. Bush, Michael Steele, Sarah Palin and the ethically compromised SC governor Mark Sanford. And while the claim may resonate with the conservative base, it is undoubtedly troubling for those who do not share her beliefs.

Consider how it looks from the outside, to Arizonans who are not religious or who come from other faiths. At best, it displays a certain exclusionary hubris. My god, who ultimately controls US politics, put me in this position, so you and your false gods will just have to deal with it. At worst, it sounds delusional. To an atheist, hearing the voice of god is not a far cry from hearing the voice of dogs.

Being on assignment from god also calls the responsibility of constituents into question. If the majority of the people in a politician's district supported a measure that conflicted with the dictates of his or her religion, how would the politician vote? If they felt that they owed their position to god and not to the people who elected them, they'd do what they thought he would want. In fact, they would probably feel bound to do it, lest they end up tortured in hell come judgment day.

This is not to say that a politician shouldn't consider the ethics of their choices. However, let's make a distinction between considering the ethical aspects of a particular issue and just blindly applying what your religious book says to everyone else's life. A politician may personally feel that homosexuality is wrong and still support a bill providing rights to gay people because the ideals of equal rights and individual privacy would trump their personal feelings.

Belief in divine support also makes politicians less likely to suffer from self-doubt or to examine their own mistakes. Some might say that's a good thing, but if you think a plan was given to you by god, how can you acknowledge that it isn't working and come up with something better? None of us are perfect, and people in power should have a healthy dose of self-doubt so they are constantly evaluating the decisions they have made and looking for ways to better achieve their constituents' goals. Imagine how the war in Iraq might have gone if Bush and Dick Cheney had not been so sure that their original plan was the perfect, divinely mandated one.

There is nothing wrong with politicians being very religious, but they need to draw a firm line between their personal choices and the decisions they make as a public servant. Claiming that god has chosen you for your job certainly suggests an inability to do that. So let me remind Gov. Brewer: you are responsible to all of the voters of Arizona, not just the ones who go to your church. Your god may have given you his cosmic seal of approval, but it's not something I recognize when I step into the voting booth.