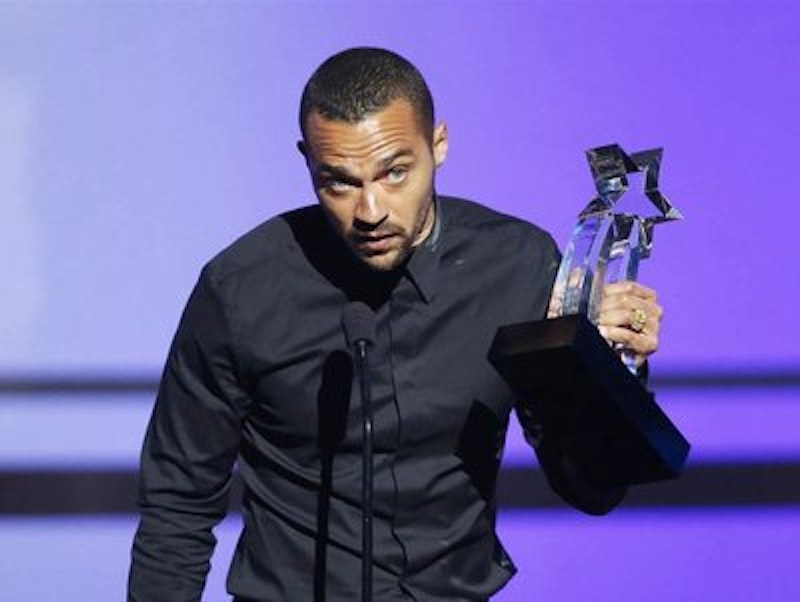 Actor/activist Jesse Williams gave a fiery speech at the recent BET awards ceremony, speaking out about police violence against blacks. The Grey's Anatomy star received warm applause from the audience, who were uplifted by his civil rights message, but when the police are criticized, you never have to wait too long for the backlash. The Grey's Anatomy official Facebook page was inundated with angry comments, and one fan started a petition to get Williams fired. The petition states, “Jesse Williams spewed a racist hate speech against white people and law enforcement at the BET awards,” and included the #AllLivesMatter hashtag.

For the record, Williams only mentioned “white people” once, when he correctly pointed out that the police tend to “de-escalate, disarm, and not kill” them more often than they do with blacks. What happened was that some took offense at Williams’ temerity in suggesting there's a racial component in police behavior, and decided to call this “hate speech.” The intent is to identify victims, occupy the moral high ground, and then silence the speaker.

In a non-legal sense, hate speech is words that threaten or insult a person or group on the basis race, color, creed, sexual orientation, etc. Legally, the U.S. Supreme Court has afforded plenty of leeway to those wishing to offend. In the Brandenburg v Ohio case, the court ruled in 1969 that, on the basis of the First Amendment, government cannot punish inflammatory speech unless it’s aimed at inciting, and likely to incite, violence. There have been few modifications of this ruling since 1969, which groups like the Westboro Baptist Church have taken full advantage of.

While the thought of neo-Nazis parading through the Jewish section of Skokie, IL chanting anti-Semitic slogans, or Westboro Baptist with their “God hates fags” signs at military funerals fills me with disgust, no freedoms come without a price. Consider the alternative offered in Scotland, where Glasgow police threatened social media users earlier this year, ordering them on Twitter to be “kind” and not “hurtful” on social media unless they want to “receive a visit… this weekend.” Police urged people to think about if what they're saying is “necessary” or “true.” This is the definition of a police state.

The legal environment of Glasgow is exactly what proponents of making hate speech a crime want, which should be noted every time one of them bemoans that fact that the U.S. is the only major democracy not having such legislation. While deciding what exactly constitutes hate speech is far from objective, people on the political left are confident that they're up to the task. This group sees the Constitution as an obstacle to overcome in their quest to re-engineer human nature by collective action through the government, even though the Constitution was written specifically from the point of view of an unchanging human nature.

Criminalizing what they define as hate speech would be a convenient tool for leftists in building a totalitarian utopia. They already frequently apply the tactic of calling people “bigots” or “Islamophobes” to silence them, but with the power to make anyone they disagree with a criminal their ability to censor would be amplified. Under the pretense of defending victims, the goal is to create an atmosphere where only certain opinions are acceptable and dissenters are afraid to speak out.

The bad news is that the regressive element of the left wing is now going to receive a steady stream of new recruits from American college campuses, which stifle free expression. Over half of them have some sort of PC-based speech code, and that number is increasing every year. Students are more concerned with not offending anyone, even if it means they have to be told how to speak. An entire generation is taught they need freedom from speech, and they're provided with safe space refuges when they feel unsafe.

When professional provocateur Milo Yiannopoulos is allowed to speak at one of his campus events, students use violence and intimidation tactics, and they attempt to shout him down, unwittingly helping him prove the very point about them he's trying to make. What these people are going to find out is that their own tactics will be used against them. Jesse Williams was gave a speech about racial equality but people called it hate speech, demanding he be fired. The right wing is realizing they can play that game too. Most of the people who applauded his speech probably support making hate speech illegal, unaware of how such laws could be used against them.

Nobody in this country has a right to not be offended. People shouldn't have to walk on eggshells for fear of offending, and the government shouldn't be policing people’s words, except in narrow ways. If the idea of a cop showing up at your door because you tweeted something deemed “unkind” or “untrue” strikes you as chilling, then consider yourself lucky to live in a country where people don't willingly give up their liberties in the name of political correctness to allow this.