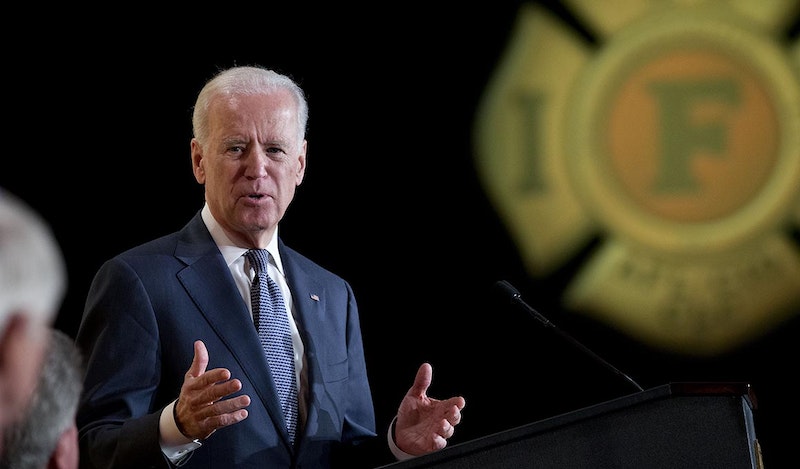 What if Joe Biden ran for president? This question interested nobody from 1992 through 2014. Even in 2008, when he actually ran, the question languished. But for a few months in 2015 it became a hot topic, and even today it still hangs on. The Washington Post looks through polls and suggests what I’ve always thought: that candidate Biden would’ve split Hillary’s vote without having much of a chance to win. That is, most of his support would have come from her, but she would’ve had a good deal left over. Democrats wouldn’t have flocked to him.

I say the Post “suggests” because the article winds up with these simple words “Who knows?” At the same time, the article is firm about one point. It assumes that a candidate who does well against Hillary Clinton does so simply because he or she is somebody else and not Hillary. Reviewing the progress of Bernie Sanders against the front-runner during the primaries, the article says, “By April, the two were nearly tied nationally. It was too late for Sanders to catch Clinton in delegates, but it showed that there was still a big appetite for a non-Clinton in the contest.”

I don’t think so. Tens of thousands of people don’t crowd a stadium just to make sure the speaker isn’t Hillary Clinton. Bernie fans have reasons of their own for supporting him. Millions of people have been shafted on their mortgages; billions of dollars have been spent saving the jobs of investment bankers. Sanders makes fixing that sort of thing issue number one; hence a good many people like him.

Hillary has received this message loud and clear, as seen from her public yoking at the hip with Elizabeth Warren. But a Post reporter can search through months of polls and suggest that Biden would’ve drawn 34 percent of Hillary’s vote and 17 percent of Bernie’s, and this reporter will still assume that Bernie’s support came from being “the anti-Hillary.” No. If voters just wanted a non-Hillary, Sanders would be the one that lost the most support. What draws people to Sanders is that he’s the candidate who says, “This is fucked up and bullshit.” He isn’t the non-Hillary, Hillary is the non-socialist, and that’s the defining fact of the race. Biden would’ve split the establishment vote and that’s all he would have done.

I’ve always believed this, and now I have the Post’s 34-17 projection as evidence. Bitterly, I add that if Biden had run, pundits would be telling each other that here was the move that gave Sanders his opening. They’d be saying that Bernie fans turned into Bernie voters when they saw that their favorite of the summer now had a chance to win. If Biden hadn’t jumped into the race, they’d say, Hillary would’ve been able to sail past the faddish enthusiasm for the self-proclaimed socialist. But that’s Biden, the pundits would conclude. Always with the mouth and no judgment. He can’t help himself. Now look at the mess that’s resulted, a socialist getting this close to the nomination of a once-respectable party.