Will Sarah Lawrence College Become the Next Evergreen State?

Student protests threaten the future of a school known for its activism. 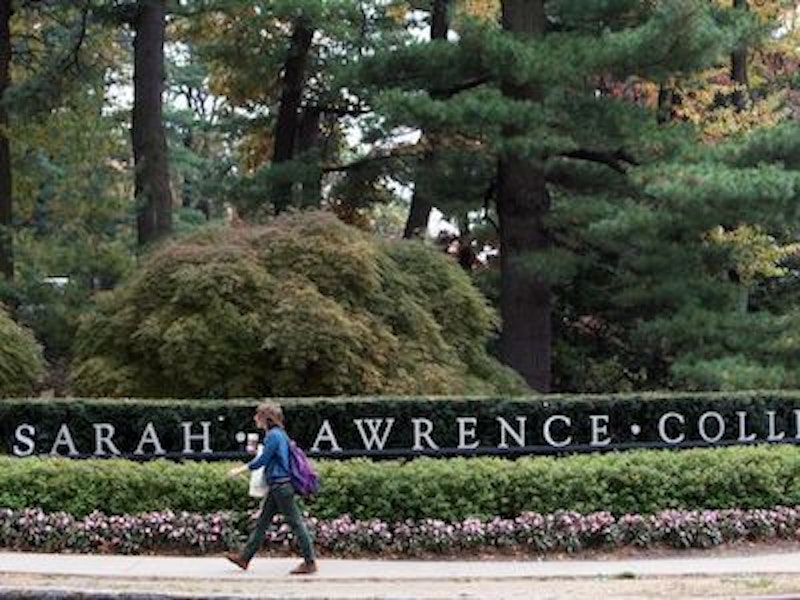 It’s heating up on the campus of Sarah Lawrence College in Yonkers, just north of New York City. On Tuesday morning, a group of students calling itself the “Diaspora Coalition” began the second day of its occupation of Westlands, the main administration building. Their rallying cry is, “We want diversity, stop the perversity!” The students have submitted an extensive list of demands to the school’s administration, which they've said reflect their “feeling neglected and disrespected.” One demand: “Campus laundry rooms are to supply laundry detergent and softener on a consistent basis for all students, faculty and staff.”

Calling for free fabric softener is probably a first as far as campus protests go, but these are different times, as we’ve seen in recent years at Evergreen State and University of Missouri. At Evergreen State, biology processor Bret Weinstein risked his personal safety by refusing to stay away from campus on a day that a contingent of students wanted to designate as a “no white people allowed” day. Students would then go on to hold the school's president against his will in his office.

The insistence that softener be provided is part of a broader demand on housing issues that includes a call for Sarah Lawrence to “designate housing with a minimum capacity for thirty students of color that is not contingent on the students expending any work or labor for the college.” The problem is that this may run afoul of New York State and federal housing laws.

This protest, just as the one at Evergreen State, coalesced around a single individual. In this case, it's Prof. Samuel Abrams, who wrote an op-ed for The New York Times in October, headlined “Think Professors Are Liberal? Try School Administrators.” Abrams, who describes himself as “conservative-leaning,” conducted a study of 900 administrators that indicated liberals outnumber conservatives by a 12:1 ratio. In his Times piece, the professor referenced an email he'd received concerning an event called “Our Liberation Summit,” which was slated to address such topics as “liberation spaces” on campus, and justice for lesbian, gay, transsexual, queer, and intersex people. Abrams’ complaint was that it was a politically-lopsided event, although he never called for it to be cancelled. He was seeking what he called “balance.” Some students punished the professor by vandalizing his office door.

The Diaspora Coalition’s demands, signed so far by 141 of the school’s 1675 students and 36 faculty members, state that Abrams is an anti-black, anti-LGBTQ, and anti-woman bigot. The students insist that they be allowed to conduct a tenure investigation of the professor alongside three faculty members of color. Abrams’ views threaten the “safety and well-being of marginalized people in the Sarah Lawrence community,” according to the protesters, who demand that both he and the college apologize for the harm that his op-ed caused to certain students.

Sarah Lawrence president Christle Collins Judd released a statement on Tuesday that recognized the validity of the student protest and contained a promise to meet with the Diaspora Coalition, but Judd called the demands related to Professor Abrams inappropriate. Bret Weinstein, when he was in a similar position at Evergreen State, soon found that it was not tenable to continue teaching there. Abrams, who's tenured just as Weinstein was, will have a difficult time weathering this storm.

These types of student protests can potentially harm a college’s reputation and ability to attract and retain students. The irony is that the Sarah Lawrence students are protesting because of what they call “safety” issues, but now students may enroll elsewhere because they wouldn't feel safe there, as happened at both University of Missouri and Evergreen State.

Sarah Lawrence is most likely working right now to accommodate the student demands, although they're going to have a hard time with some of them. The Diaspora Coalition is demanding that international students be given top priority in filling on-campus jobs. They're also insisting that students of color shouldn’t be forced to resort to “racist white professors” to have access to their own history, and calling for the college to designate five new tenured “faculty of color.”