A Shot in the Darkness

This is nihilism as a condition and an act. 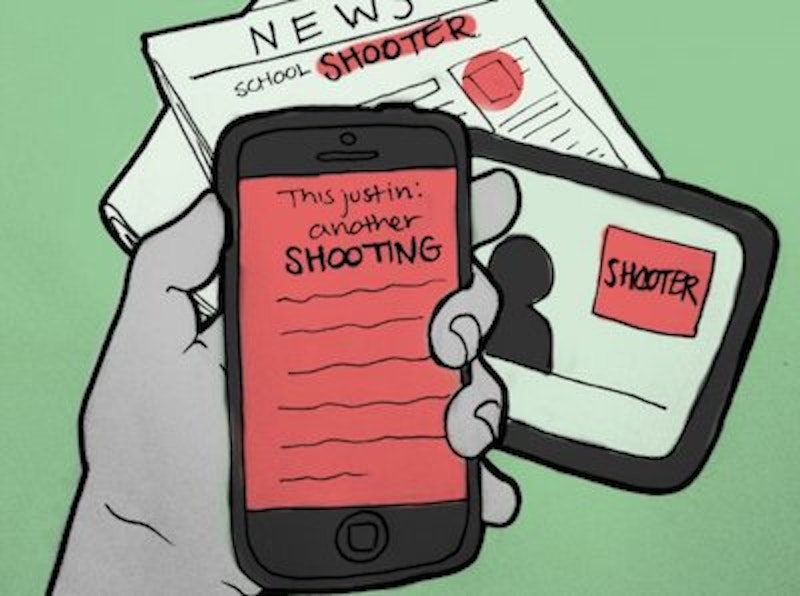 Their motives, ideologies, and diagnoses are various: Islamism, Islamophobia, psychosis, toxic masculinity, white supremacism, PTSD. They seem to come more from the right than the left at present; in the 1900s or the 1970s, they came more from the left. Like the Las Vegas shooter, however, they can come seemingly from nowhere at all. But the form is the same: almost mechanical, a ritual. Dress in black. Strap on the assault weapon. Go someplace where there’s a crowd. Shoot as many as possible, indiscriminately. Perhaps as we continue to struggle—as we must—to explain what’s going on, we ought to focus not so much on what the shooter takes himself to be doing and why, or even on what disorders seemingly drove him, but on what he actually does and what that might mean.

"I incessantly have nothing other than scorn for humanity," wrote the Sandy Hook killer Adam Lanza on an online forum, according to documents recently released by the Connecticut State Police. "I have been desperate to feel anything positive for someone for my entire life." Lanza is clear on his own desire for universal annihilation, and whatever the killer may be telling himself, a mass shooting is a total repudiation or negation of humanity, both in others and in the murderer himself. He sets out above all to kill as many people as quickly as possible. He’s not only killing particular others, against whom he might have a particular grievance. Even if, like the Christchurch killer, he exalts his own race, or like Nidal Hasan his own religion, he enacts a repudiation of every human being in the world, including, as the usual last act of erasure, himself. If he could, he’d expunge the species from the surface of the earth. A mass shooter has concluded that the universe would be better without us in it.

I won’t deny that the experience that we have of one another may be beautiful, nurturing, inspiring. But I hope no one’s going to deny that it can also be dark. People get left behind or aside. We lose the people we love, one way or another. We betray one another, we casually exclude people who seem wrong or different somehow, we take away one another's joy: sometimes casually, sometimes permanently. People get dismissed, exiled, fired, slandered, ostracized, bullied, abandoned, and so on; we do these things to one another, and sometimes or often we do more or less all of them to the same person without much regard for what they deserve, and certainly without regard for what they may think they deserve.

Consider, too, what we do to each other on a large scale: war, exploitation, genocide, and environmental destruction. It’s not hard or insane to reach the conclusion that, as a species, we may be a biological or moral mistake. Looking at us from certain angles—specifically, from the angle of those of us who are suffering from us—it’s possible to see how someone might want or demand our end. Mass shootings are sometimes described as acts of “nihilism,” and that might be an appropriate way to think about it. But this is not nihilism as a doctrine: the claim, for example, that there are no genuine values or that life is meaningless. This is nihilism as a condition and an act, nihilism as annihilation: a desire to delete oneself and one's kind from reality.

A particular mass killer might feed this condition of despair through the lens of a particular ideology. He might think he's responding to some particular circumstance. He might intend to kill a certain sort of victim. But he ends up killing everyone who happens to be in a particular place. His own account of his motivations, I’m saying, is liable to be misleading, given what he actually does. These are terrifying thoughts, and one of the worst things about mass killings is that they can induce these thoughts even in people that didn't have them before, or not so clearly. The phenomenon of mass killings itself seems to confirm the shooters' view of humanity.

I'm not sure, once I start on reflections like this, what might bring me out. But I need to find a way out, or that we need to find a way to affirm ourselves and each other and our lives in the face of the rage and despair that we see so intensely before us in these days. I'm not sure what we can do except take better care of one another. I don't think there are general solutions, only specific interactions; the idea isn’t to assert that the shooter or prospective shooter is wrong about us, but to prove that he is. If we're going to show each other that our species deserves to exist, it's going to have to be a little bit, in every direction, every day, and everybody.

We’re not going to fix this by purporting or pretending to fix social media, or comedy, or poetry, or education, or politics, or the president's Twitter feed, or even one another. We're not going to fix it by institutionalizing or stigmatizing people with mental illness, or re-educating disgruntled male loners, or prohibiting the publication of manifestos, or even by getting rid of the guns, though that might at least reduce the body counts. We're going to have to fix it by trying not to abandon a single one of us, by each of us trying to see each of us, by trying to connect with specific other people even if they seem to be trying to disconnect from us. What we need to hope for is not a utopia of kindness, but an incremental increase of awareness and connection.