Grin and Bear It

On the Associated Press photograph of President Obama’s recent Guinness toast in Ireland. 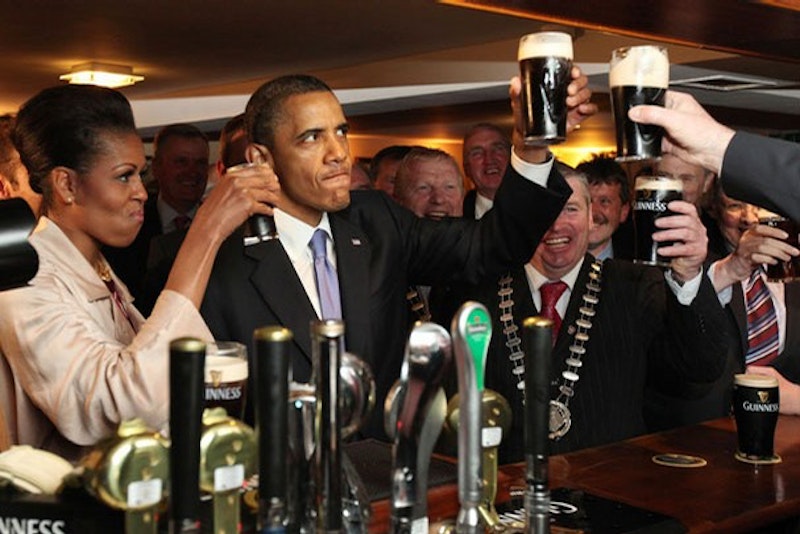 We envy our political leaders their power, influence, vacation homes, the stacks of corporate and ideological cash they have to fall back on after leaving—or being squeezed out of—office. But photographs like the one above—the Associated Press shot of the President and First Lady involved in some sort of Guinness toast at an Irish pub earlier this week—remind us that the campaign for public-opinion never really ends, and that symbolic, gestural photo-ops are one of the many (not-so-hidden) costs of life in the media spotlight, of weaving a man-of-the-people meta-narrative.

Man, look at that picture again. Are you uncomfortable for Barry and Michelle, too? I mean, I am, and I’ve had Guinness before, in a dank college dorm room, many moons back; if you haven’t had one before, or haven’t had one in a while, the heaviness of even a tentative sip of that stuff hits like a sucker punch to the palette. You can read that heaviness and foreignness in Michelle’s expression, how she’s contorted her mouth to stem the tide of foamy ochre beer to something manageable, controllable. Ditto the clench of Barry’s jaw and the severity of his eyes, though the Obama hagiographers among us may opt to read this expression as game enthusiasm, a manly embrace of the first leg of the European adventure. It’s similar to recent pictures of my son, where he’s been encouraged or coaxed to smile even though he doesn’t want to, so the result is this sort of strained, fake grin that’s more like a grimace; maybe “forced” is word I’m looking for, except that the Obamas seem more bemused that chagrined.

The point is, though: these people do not drink Guinness, likely won’t drink it again anytime soon, their utter and complete lack of Guinness-readiness is immortalized here; that this picture will be used for and against the President is less sad, in a way, than the fact that it needed to be taken and widely disseminated at all, that he even needed to venture out to the pub and go through this dog and pony show, that there was an abject need for this mostly unobtrusive bit of stagecraft to happen at all.