There Is No Such Thing as a Mandate

Republican candidates pandering to their right wing base and messing with a sacred cow entitlement like Medicare is going to cost them any chance in the 2012 presidential election. 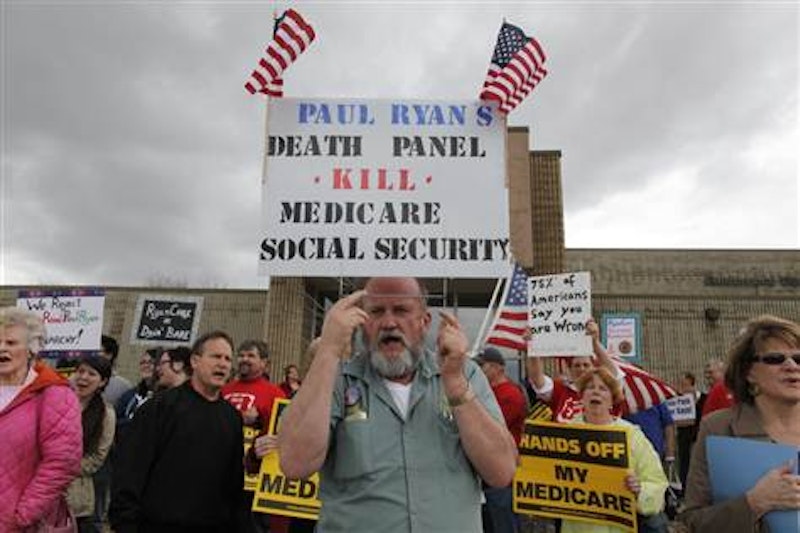 So here’s the deal: The more Republican candidates for president pander to the GOP’s narrow right-wing base, the less chance they have of winning the general election and the presidency. That appears to be the unmistakable message inherent in New York’s special Congressional election and in the U. S. Senate Democrats’ forced vote that put Republicans on record as favoring the dismantling of Medicare. The contours of the 2012 elections are rapidly taking shape and the issues are as clear as three fingers of Vodka: Don’t mess with sacred-cow entitlements no matter how much they cost and there is no such thing as a mandate.

The public is once again riled up, but in this rendition the issues and the timing favor the Democrats. Republicans can thank Rep. Paul Ryan (R-WI), the House Budget Committee chairman, for the isolation booth they’re in. He’s the wunderkind ideologue who came up with the bright idea of privatizing Medicare. Republicans, based on the 2010 elections, deluded themselves into thinking they have a mandate when, in fact, there is only one mandate—218 votes in the House and 60 (under current filibuster rules) in the Senate. Mandates, to the modest extent that they might exist, are fickle from one election to the next. Consider the turnabout of the electorate in just one year as well as the virtual disappearance of the flash-in-the-pan Tea Party. Angst has replaced anger.

And Republicans are demonstrating that they still fail to understand the difference between primary and general elections. Primary elections are built around organization—identifying the party vote and getting it out on Election Day—and general elections are based on issues and personalities. Pitching to Tea Party grumps in the primary will not sway black, Hispanic and the influential swing voters in the general.

So it’s amusing to watch Mitt Romney, former governor of Massachusetts, wriggle and writhe over the issue of Medicare and, more to the point, Obamacare, which was modeled on the law of mandatory health insurance that Romney enacted as governor. Try as he might to hide from Ryan’s Medicare voucher proposal, Romney, as the front-running GOP presidential candidate with only a 17 percent standing in the polls, has very little wiggle room. Tim Pawlenty, presidential candidate and former Minnesota governor, spluttered his way through a disengagement from Ryan by saying he’d eventually present his own plan for propping up Medicare. But the very next day he executed the old dipsy-doodle and said, that as president, he’d sign the Ryan plan into law.

And Newt Gingrich, former House speaker, who considers himself a public intellectual and an explosion of bright ideas, few of which actually work but only benefit him and his clients, is on every side of the Medicare issue with a reversal a day. While Gingrich often rails against federal government and its health care programs, he is benefiting from them handsomely. His Center for Health Transformation has 94 clients who pay $200,000 each every year for advice on how to cash in on the $19.6 billion in stimulus money to digitize health care records, according to Bloomberg Businessweek. He has offices and 23 assistants on lobbyist row on K St. in Downtown Washington. So it’s easy to see how Republicans are pinned down between the party’s base and the public will.

There is very little public sentiment for reforming Medicare, and that was reflected in the special Congressional election in upstate New York’s solidly Republican 26th District of Buffalo and surrounding areas. Preserving Medicare was the centerpiece of Democrat Kathy Hochul’s one-note campaign where she won by four points in a district where a Democrat hasn’t won since 1960. The Republican, Jane Corwin, had endorsed Ryan’s plan. For the record, the Tea Party candidate, Jack Davis, formerly registered as a Democrat, ran next to last, with nine percent of the vote. There are 47 million Medicare clients across the country, and in Maryland there are about 750,000 Social Security recipients, presumably most or all of whom receive some form of government health care benefits.

When Senate Majority Leader Harry Reid (D-NV) called for a vote on the Ryan plan in the Senate, his objective was to tighten the noose on Republicans and lock down the Medicare issue for Democrats. When the roll was called, 40 Republican Senators voted for the Ryan Medicare voucher plan, displaying unity but nonetheless feeling anxious and trapped, while five Republicans joined every Democrat in rejecting the plan. Even though only 10 Republican Senate seats are up for election next year, there 40 senators on record as favoring dismantling Medicare and 10 of them with a lot of explaining to do. Medicare is now a major issue in next year’s elections, just as Republicans demagogued Obamacare in 2010 with allegations of “death squads” deciding who would live or die.

With President Obama’s reversal of fortunes on the issues and his being on the cusp of raising an unprecedented $1 billion in campaign funds, few top tier Republicans (if there are any) appear willing to take on the assignment of challenging a sitting president. There are so many Republican candidates raising money that by the time a nominee emerges there won’t be enough time left to match Obama’s fundraising prowess. Republican headhunters are still looking for a suitable candidate. Mike Huckabee, the Elmer Gantry of the Tea Party lobby, and Mitch Daniels have bowed out and Republicans are still waiting for decisions from Rick Santorum, Sarah Palin and Michele Bachmann, two right-flank divas who could rally the base and re-energize the Tea Party. Palin has reportedly purchased a $1.7 million house in Scottsdale, Ariz, moving her political base to the lower mainland, and has begun a bus tour of historic sites along the East Coast to put her in touch with America’s beginnings (the tour sounds more like the outline of another book along Alexis de Tocqueville’s plot-line rather than a presidential campaign.) Meantime, the party’s apparatchiks are attempting to recruit Rick Perry and Chris Christie, the GOP governors of Texas and New Jersey, and Jeb Bush, former governor of Florida and brother of President George W. Bush, considered among the party’s most eligible candidates. And while we’re at it, add Rudy Giuliani’s name to the list just to be safe and inclusive.

But there might be another factor at work as well. Facing an incumbent president with a billion dollars to spend is a fearsome challenge. So the GOP’s more desirable candidates, whoever they are, might be choosing to sit out 2012 to conserve their energy, organizing skills and fundraising power until 2016 when the presidency will be open. By the same reasoning, the many candidates who populate the Republican presidential picture this year might also be posturing to claim a position for the 2016 race by getting their names out front and their claim on the nomination as an inherited right, as Republicans tend to do. Consider this: 1960—Richard M. Nixon; 1968—Richard M. Nixon; 1972—Richard M. Nixon; 1980—Ronald Reagan; 1984—Ronald Reagan; 1988—George H. W. Bush; 1992—George H. W. Bush; 2000—George W. Bush; 2004—George W. Bush. But no matter who or what, they still have to face an unforgiving public on the Medicare issue and a president who is committed to preserving the entitlement against a party that has badly bumbled the health care issue. Senior citizens vote with a vengeance.