Rick Perry is the GOP’s Best Chance to Defeat Obama

The Texas governor is direct and a strong campaigner, unlike Mitt Romney, Tim Pawlenty and lesser challengers. If Republicans want to win, every faction of the party will have to overlook some of Perry’s views. 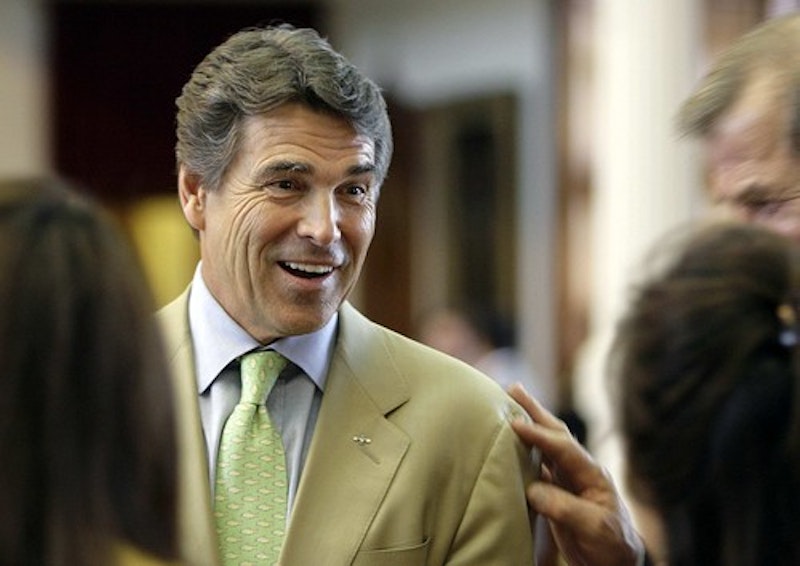 Right now, some 17 months before next year’s presidential election, the safe money says that Barack Obama, with his flair for campaigning (as opposed to governing) and much-ballyhooed $1 billion fundraising goal, will coast to a second term in the White House. As unemployment is stuck above 8.5 percent (fluctuating month to month), the recovery from the financial collapse in 2008 hardly robust, and Democrats annoyed with President for increasingly following the foreign policy path of a predecessor whose name is still not mentioned in polite liberal company, this is somewhat puzzling. That is, until you consider that the Republican Party has no national leader, no legitimate front-runner for their presidential nomination (Mitt Romney doesn’t really count since his poll numbers are based solely on name recognition) and, at least publicly, no high-octane national campaign apparatus.

In fact, it’s probable that Republican leaders are privately hoping for a candidate who’ll just keep the election close and not drag down its Congressional candidates in an Obama landslide that, say, a Sarah Palin or Jon Huntsman nomination would produce. Gov. Mitch Daniels and Sen. John Thune, amiable yet serious men with appeal to independent voters, would’ve given Obama a fight, but they both followed the example of Democrats in 1991 who declined to run (with varying cover stories) because the first President Bush was seen as invulnerable. Politicians are by nature myopic and cautious, but Bill Clinton wasn’t and he saw a nomination up for grabs and was eager to take on the seemingly long odds. His candidacy didn’t thrill rank and file Democrats (save journalist Joe Klein) for any number of reasons: too Southern (the curse of Jimmy Carter), not liberal enough, potential baggage (catting around) and an embarrassingly long and fairly incoherent speech at the ’88 convention that tapped Gov. Michael Dukakis (hands up for anyone under 30 who even knows what state Dukakis represented).

So, since that resulted in a two-term Clinton presidency, it’s really not out of the question that a Republican could defeat Obama next year. Obama’s victory in ’08 was undeniably historic and the jubilation it caused across the country obscures the plain fact that it wasn’t a romp: John McCain, one of the worst Republican candidates in memory, received nearly 46 percent of the popular vote, which is somewhat amazing considering the antipathy to George W. Bush and McCain’s ham-handed response to the financial collapse. Conservative ideologues—the economic hawks, not the Moral Values scrum—would cheer a run by Rep. Paul Ryan, author of the controversial (and sensible) Medicare reform plan, even though it’s almost a given he’d go down to a Goldwater-like drubbing, perhaps seeding the field for 2016, perhaps not.

I hadn’t given much thought to a Rick Perry nomination—his off-the-cuff talk in 2009 of Texas seceding from the union, while taken out context, was off-putting—until reading a May 28 New York Times op-ed by Gail Collins, in which the pundit amused herself, and probably the newspaper’s decreasing number of readers, by making fun of the Governor’s intellect, gun ownership and allergy to excessive federal regulation.

If a lightweight imitation of Maureen Dowd—which is saying something—makes jokes about Rick Perry, that’s reason enough, I think, to take the man seriously. Perry, who until recently ruled out a presidential run, but is now “considering” it, wouldn’t be my first choice for the GOP nod. I don’t care for his cozy relationship with the Tea Party crowd, or his pro forma (for Republicans) obeisance to the pro-life plank, and his excessive spouting off on the moral righteousness of Christian values is aggravating.

Nevertheless, if you’re opposed to Obama’s presidency, it’s not a stretch to support (even with mild enthusiasm) an alternative with whom you can agree on about 70 percent of the issues. Democrats have howled, but Perry’s recent signature on a bill that requires a valid photo identification to vote in elections is long overdue—residents lacking such a document can obtain one free of charge—and is spreading to other states. After Florida in 2000, it’s inconceivable that election reform hasn’t been taken more seriously, since fraud at the ballot box is as old as politics (on both sides), so maybe Perry’s legislation, as well as that of Gov. Scott Walker (along with Ryan, a prime piñata for Democrats) in Wisconsin, will make a difference.

At the least, it’s a proactive move. Which brings us to Paul Ryan and his complicated Medicare bill (“Mediscare” to the demagogues of the left wing). Ryan’s getting pummeled in the media for actually taking the time to address the looming bankruptcy of this entitlement, and though the GOP has done a lousy job of explaining its provisions—something that a charismatic candidate like Perry, who’s far more adept than the studious Ryan to boiling down such an audacious proposal—the Democratic leadership has produced nothing. Even The New York Times, in a May 29 editorial, has scolded the Democrats for avoiding hard fiscal issues in favor of political considerations. “But if Democrats are ever going to regain the momentum in the national conversation,” the paper warned, “they have to stand for something. Standing pat gives Republicans huge openings to move the debate to the right… [W]hat exactly are the Democrats proposing as their alternative [to Ryan’s blueprint] to get the budget back into long-term balance?”

Naturally, the Times is in favor of “raising taxes on the rich and to a lesser extent on the middle class,” but expecting Obama to even touch the idea of tax hikes on the middle class during a general election strains credulity. He’s going to play it safe, likely with a refrain of “We’ve accomplished much in the past four years, but there’s still work to do…” that’ll sound phony to all but the President’s diehards.

As I noted above, Perry’s a default choice for the GOP, but as a messenger for a pro-business, small-government and free trade platform there’s no question that he’d engage the country far more than the lackluster Tim Pawlenty or discredited Mitt Romney. Perry, 61, is a three-term governor (the longest tenure in Texan history), no milquetoast on the campaign hustings and could be expected to be a prodigious fundraiser. And if he taps Florida’s Sen. Marco Rubio as his runningmate, making the ticket more palatable to Hispanics, the worry beads will come out in the White House.