The American mass media coverage of Hosni Mubarak's trial has been shameful and misleading. 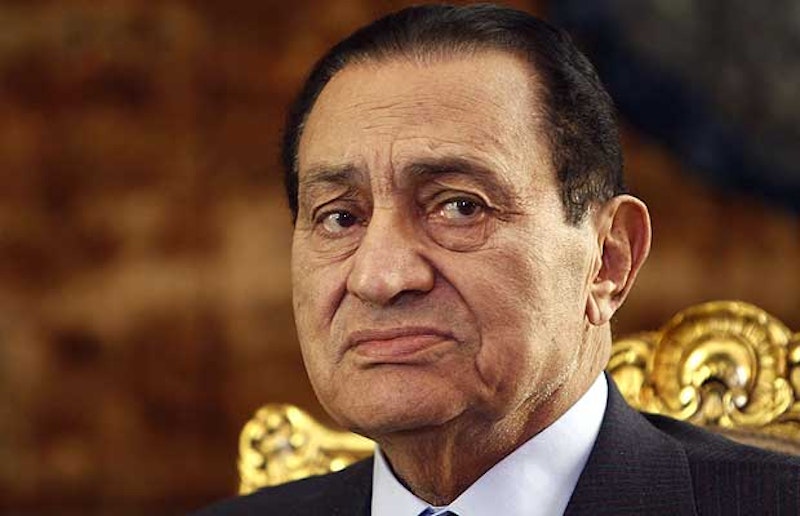 The American mass media’s coverage of Egypt’s decision to put Hosni Mubarak on trial functions as state propaganda. A report by The Wall Street Journal presents the story as a negative development for America and the Middle East, and The Washington Post portrays the prosecution, together with the revolution as a whole, as a bad outcome for the people of Egypt. As with The New York Times, both papers fail to communicate the attitudes of Egyptians, ignore or sanitize Mubarak’s crimes and obfuscate America’s role and motives for sustaining Egypt’s (still) oppressive government.

The Wall Street Journal’s front page article under the headline “Murder Trial for Mubarak” opens with a brief description of the charges brought against Mubarak, and then goes on to discuss in great detail the potential consequences for America and its allies, portraying the prosecution as a bad development. “For the U.S., the spectacle of a trial could prove embarrassing and will likely complicate its diplomatic efforts in the region” because “Mubarak was for decades one of America’s staunchest allies.” As such, the prosecution “is likely to undermine U.S. efforts to persuade other Arab leaders to give up power peacefully.” Even worse, it “could persuade other Arab leaders facing unrest and pro-democracy movements to follow the models of Arab leaders who have brutally crushed demonstrations.”

For Saudi Arabia and Israel, key American allies, this is particularly troublesome. “Mubarak’s trial could add to anger among Persian Gulf allies, particularly Saudi Arabia, for not doing more to protect a long-time friend.”  And the charges “will feed concerns in Israel that trend lines in the post-Mubarak Egypt are moving away from moderation and toward extremism” because “Mubarak was a defender of Egypt’s peace treaty with Israel.” Ultimately, the push for prosecution may amount to “a cynical gambit by military leaders to prosecute their former commander-in-chief in order to preserve their own power and prestige among an increasingly frustrated public.”

Overall, there are six quotes, one listing some of the charges brought against Mubarak, three from officials describing the prosecution as harmful or calling attention to the “cynical gambit” by the military, a declaration from Mubarak that he “will die on its [Egypt’s] land,” and just one from an Egyptian protestor. Furthermore, only the final two paragraphs briefly discuss how the protestors feel about the impending trial and the current situation. What it means to Egyptians to obtain justice for three decades of brutal oppression and criminality is essentially irrelevant, in other words. This strongly and implicitly reinforces the imperial mindset that permeates the American mass media—only our concerns are important, not those of the “unpeople.”

On the “liberal” side of the spectrum, we have The Washington Post, which even more brazenly depicts the prosecution as a bad development. A front page article bears the headline, “For Mubarak loyalists, a sense of vindication: ‘Old days were better,’ they say, as Egypt faces crime, poor economy.” The article focuses almost exclusively on how much worse living conditions are in Egypt now that Mubarak has been ousted: “People used to stay out late when the sense of security was strong, she [Marwa Yehi, a 30-year-old Egyptian office worker] recalled. ‘Now the streets are empty after sundown.’” Similarly, Egypt currently suffers from “a level of crime and violence unheard of when Mubarak’s feared security forces kept tight control.” The problem is that, according to an Egyptian police officer, “the people control us now. We no longer control the streets.” Accordingly, “Egypt’s experience may serve as a cautionary tale” for other democracy-hungry nations in the Middle East.

Although a “corrupt” leader, Mubarak has been given “too little credit for keeping them [Egyptians] safe,” shielding the population from a repeat of “Egypt’s 1973 war with Israel.”  And because “he kept the nation safe for three decades,” according to people interviewed in the village of Kafr El-Meshelha, “he deserved a dignified exit.” Unfortunately, “instead, Egypt’s top prosecutor said Tuesday that the former president will stand trial on charges of corruption and conspiring in the deadly shootings of protesters—charges that could carry the death penalty.”

That is the extent of The Post’s discussion of the impending prosecution. The utter contempt for democracy displayed in this article is remarkable. Aside from sanitizing the brutality of Mubarak’s regime, which enforced a state of emergency for roughly 30 years that granted the government authority to imprison and torture anyone they like, among many other human rights violations, The Post would have us sympathize with the police, who are now supposedly under the control of the people!

As for “Egypt’s 1973 war with Israel,” Mubarak was not the one who brought peace; it was Anwar Sadat, who, contrary to Western mythology, initially launched the Yom Kippur War in retaliation for Israel’s occupying the northeastern Sinai in 1971 and establishing a settlement called Yamit. Sadat called for peace in exchange for Israeli withdrawal in 1971, in accordance with The Jarring Mission, but, fresh off its stunning success during the Six Day War, Israel declined. The 1973 war was a disaster for Israel, and it negotiated a peace treaty in 1978-79 because it had little choice. True, Mubarak upheld the deal during his reign, but the source of that conflict was Israel’s imperial ambitions. The Post, like the rest of the mass media, reinforces the assumption that it is Arab nationalism and radical Islam, not Israeli aggression, that causes strife.

The New York Times comes out best in its coverage, though that is hardly saying much. Its front-page story, titled “Egypt Is Moving to Try Mubarak in Fatal Protests,” focuses mainly on the charges brought against Mubarak. There is no mention of America’s complicity in and responsibility for Mubarak’s crimes and no hint that the U.S. effectively controls the military and likely intends to simply replace Mubarak with a new compliant dictator, if possible. And the tone is extremely matter of fact, arousing no outrage. There are only two quotes from protestors, and none of them refers to Mubarak’s repressive rule. The quotes are aimed at the military’s role in bringing the prosecution onto the national agenda, which is merely “a reaction” to public demands and “not a bad step…  but not good enough to stop us from challenging them [the military] about how they are running the country.” And the only indication that justice will be delivered is the brief remark that “the Egyptian people could soon see the leader whose iron fist ruled them for nearly three decades seated in the steel cage that serves as a docket in Egyptian courtrooms.”

Compare this to the Times’ coverage of the impending trial of Saddam Hussein, in an article on July 3, 2005 called “A Town That Bled Under Hussein Hails His Trial.” The report describes Saddam’s massacre of the people of Dujail in 1982. Although there is a predictable failure to include America’s role in these crimes, considering that the Reagan/Bush I administrations supplied Saddam with aid and arms, and a National Security Directive referred to the tyrant as a source of “stability in both the Gulf and the Middle East,” the article rightly expresses the outrage felt by the victims of Saddam’s massacre. There is an abundance of quotes by witnesses, such as “It was about 2:30 p.m. when we heard people saying that Saddam had arrived, so we ran into the streets to see him, and right away his bodyguards started shooting at us, and they killed three of my friends.” The author then goes on to detail many of Saddam’s most heinous crimes, such as the gassing of the Kurds. The piece closes with a triumphant quote from a victim of Hussein’s brutality: “like these trees, Iraq is reborn. We are just at the beginning, but once Saddam has been tried and executed, we believe Dujail will begin to rise again.”

The divergent treatment conforms to the model of state propaganda. Once Saddam became an official enemy after invading Kuwait, the victims of his vicious regime became important. Mubarak, on the other hand, was always compliant, so his victims are not given the same treatment.