National Geographic's Stormageddon tells us the harsh truth about climate change that the rest of the mainstream media won't. 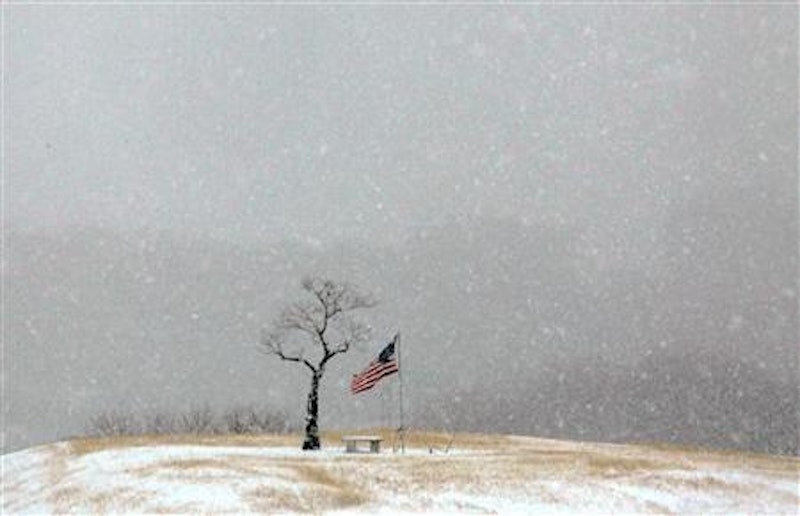 National Geographic’s new episode of Explorer, called Stormageddon, paints a frightening and striking picture of how climate change is destroying civilization, one that is often obfuscated in the (rest of the) mainstream media. Through interviews with climate experts and footage of the devastation wrought upon Russia and Pakistan during 2010, among others, Nat Geo shows how global warming is causing massive droughts, flooding and ice melt. The immediate future looks extremely bleak, according to the experts. But in the mass media, particularly The New York Times, such candor is hard to come about.

The Nat Geo episode documents the manner in which Russia was devastated last summer by drought. It was the hottest summer in history, causing wild fires that destroyed tens of thousands of acres of land and roughly 40 percent of the country’s wheat crop, killing 50,000 people and affecting six million lives. The effects are still being felt, as the wheat fiasco has contributed to global food shortages, which has driven up prices and played a significant role in spurring the uprisings in the Middle East.

As is usually the case, the poor and vulnerable have been hurt the worst throughout the world. The rain that normally falls on Russia was redirected by unusual holding patterns in the northern hemisphere jet stream to Pakistan because of climate change. Consequently, the region, which annually experiences monsoon seasons, was swamped by storms six times more powerful than usual. The human toll is beyond comprehension, as thousands have been killed and millions have been made refugees in a poor country. That means no food, shelter, etc.  Let’s also bear in mind that Pakistan is already a highly unstable region with nuclear weapons. Nat Geo does an admirable job at showing footage of the horrors and interviewing climate experts confirming the unmistakable connection between climate change and the catastrophe: with more greenhouse gases in the atmosphere there is more energy; with more energy there is more heat; with more heat there is more water vapor; and with more water vapor providing excess energy, there are more frequent and severe storms; simple physics.

Indeed, the impact of global warming is proving far more severe than had previously been presumed. 2010 was the worst year for extreme weather on record, as was the first decade of the 21st century. Already, as Nat Geo shows, 30 percent of the Arctic has melted, and it will completely disappear by the end of the century, if not sooner. While politicians have amazingly depicted this as a potentially good thing, with Hillary Clinton hailing the opportunity to extract more oil from the area and increase tourism, in truth this development has doomsday-like implications. While much of the climate change debate focuses on CO2 emissions, which are rapidly approaching 400ppm, the highest in human history by over 120ppm, a greenhouse gas that gets little attention is methane. Packed in the permafrost of the Arctic, this gas is 20 times more potent than CO2. When the permafrost melts, all the methane will shoot into the atmosphere.

As Stormageddon discusses in vivid detail, the effects of climate change have already been severe. Global temperatures have risen more than one degree during the last century due to fossil fuel energy systems. We can see the evidence here in America.  Aside from the twisters that rampaged the country in April, the most extreme case on record, Smith Island, in Chesapeake Bay, is drowning. Nat Geo interviewed residents describing how they’ve seen chunks of the island disappear during the last decade. But it’ll only get worse, especially considering that the IEA recently reported that we set a record for emissions last year, in spite of the recession. Stormageddon closes with a climate expert warning that 2010 will prove a normal year compared to what we’ll see in the coming decades.

But this kind of frank talk is seldom seen in the mainstream media (although Nat Geo is part of the mainstream, since it is largely owned by News Corp., it approached the issue from a purely scientific perspective, not political, and it was created by and continues to be partly owned by the non-profit National Geographic Society. True, I have seen some good work on major networks—last summer CNN aired a special about the impact of global warming, and 60 Minutes has conducted some valuable interviews with experts. But on the whole, the debate is misleading.

Let’s bear in mind that, without any exaggeration, our only chance for survival lies in radically overhauling our energy system to stop emitting fossil fuels immediately, nothing less. Yet this possibility is not even being seriously considered by the elites in America for obvious reasons—short-term profit and power. And it shows in the mainstream debate. We might hear reassuring noises from the President and the press about the need to “get off of foreign oil,” but there is no serious effort to shutter the fossil fuel industry, as illustrated by Congress’ failure to pass a mild climate change bill last year. The subject barely comes up anymore, and the population is largely indifferent.

And there’s a reason why, in spite of the consensus among climate experts and the fact that virtually every prestigious scientific institution has signed documents urging governments to act with great urgency to stop global warming. The media plays a crucial role in this. There is, of course, the right-wing propaganda machine, paying “experts” to deny global warming through the Chamber of Commerce, think tanks like the CATO Institute and FOX News. But then there’s the “liberal” mainstream. In media outlets like The New York Times, we get some basics about global warming, but generally nothing that makes readers want to protest.

We are told that we are leaving a disastrous environment for “our grandchildren,” as though the effects will not be seen for a few generations. In addition, we must always be made aware that there are “skeptics” who think the science is either not settled, exaggerated, or false, as if they can be taken seriously. Furthermore, we seldom hear about runaway global warming—the idea that we have so radically transformed the environment that there is nothing we can do to reverse the situation. And last, we are constantly reassured that technology will save us.

An article that appeared on the front page of The New York Times last summer is a case in point. The article is perhaps as candid as the Times will get about climate change, but even this is toned down. The headline states “In Weather Chaos, a Case for Global Warming,” implying that there is a real debate to begin with. The author proclaims, “The collective answer of the scientific community [to “the question of whether global warming is causing more weather extremes”] can be boiled down to a single word: probably.”

Later we read: “Climate-change skeptics dispute such statistical arguments, contending that climatologists do not know enough about long-range patterns to draw definitive links between global warming and weather extremes.” In reading an article about the laws of gravity, would we expect to be told that “skeptics dispute the notion that when you drop a ball it will fall to the ground?” Further contributing to the obfuscation, The Times says “It will be a year or two before climate scientists publish definitive analyses of the Russian heat wave and the Pakistani floods, which might shed light on the role of climate change, if any.” The concept of runaway global warming, let alone the idea that we’ve likely reached that stage already, does not come up. And although this article does not discuss the theme of technology as savior, in general we almost invariably hear that we can certainly be rescued.  This may or may not be true, but in any case such wishful thinking makes it easier for the public to remain complacent.

The general coverage in the mainstream is designed to reinforce content by ignoring or downplaying the urgency of the crisis. It is becoming increasingly evident that we, not just our grandchildren, will experience the dire effects, but those who trust the mass media would not know it. For example, as mentioned above, a few days ago the IEA, the gold standard of tracking emissions, released a report concluding that we released more greenhouse gases last year than in any year on record, making it inevitable that temperatures will rise at least another degree in the not-too distant future. The Times did not even mention this. Similarly, MIT released a report in 2009 stating that prior predictions about global warming are too conservative. This also received little to no attention in the mass media.

The global warming debate would be comical if it were not so tragic. If scientists warned us that an asteroid was about to strike the planet would we ignore them? The failure to act in the face of climate change is more frustrating and disgraceful because we apparently have time to react. To get an idea of what’s really happening, I urge everyone to heed the warnings of climate experts. A good starting point to get an idea of what they are saying is to check out Nat Geo’s show.