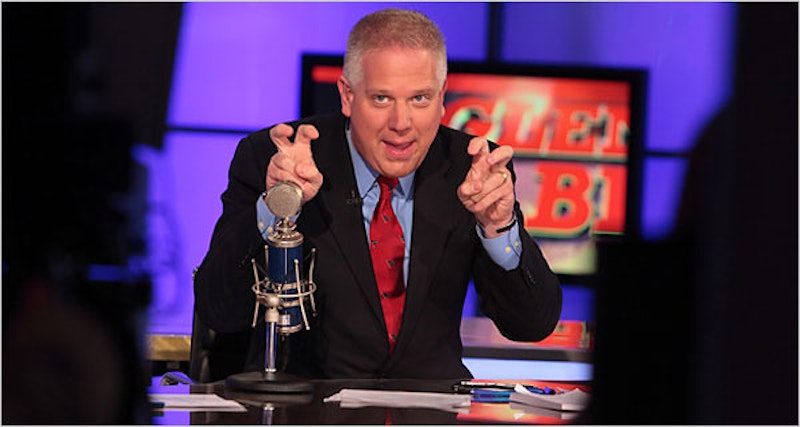 Is Glenn Beck’s leaving FOX News truly significant?  Naturally, his enemies are thrilled to see Beck fold up his blackboard and go down in apparent defeat, though he’ll certainly continue to spew his disinformation for his followers elsewhere. But when we consider that the mainstream media functions as a source of distraction that pumps the population with propaganda while suppressing the crimes committed by our leaders, does Beck’s absence really make much of a difference? Yes. Because, as I was recently reminded in gruesome fashion, Beck does not merely distract his audience, he fills them with hate and a dangerous sense of ultra-nationalism.

I recently talked to a Tea Party activist and Beck supporter I know about the role of government in the context of health care. Now, this may sound crazy, but I thought we might find some common ground because the Tea Party hates not only government, but everything—both political parties, the Federal Reserve, the banks, the big corporations, etc. So I asked if it makes more sense to have a public health care system in which elected politicians, who must answer to the people (at least in theory), run the program, or to go on as things stand, with a few massive corporations who need not answer to anyone but their paymasters on Wall Street, dictating whose eligible for care, how much doctors can be compensated, and so on.

The immediate response was not very surprising, though it led somewhere unexpected. Of course we must never have “government bureaucrats” in charge, not simply because they are incompetent, but because the Constitution does not grant them such authority. The Constitution, I was told, which must be followed literally, is unambiguous, and it stresses the need to keep government small. This is nothing new and not worth debating. But I asked how he interprets the infamous three-fifths clause, labeling blacks as less than a full human being for enumeration purposes in terms of taxes and Congressional representation.

This was where the real nasty business began. He said the idea that the three-fifths clause is racist is just another crazy propaganda campaign by the liberals. In reality it underscores the benevolence of the Founding Fathers, who wanted to end slavery, though the North prevented them. The truth, though intensely obfuscated, is that the three-fifths clause does not refer to black individuals, but to states with slavery. In other words, each slave-owning state would be counted as less than a full state to ensure that they receive less representation in Congress and hasten the end of slavery. The Founding Fathers, along with the South, were the ones who sought to abolish slavery, while the evil North, which wanted blacks to be counted as full persons and thus award slave-owning states more power, sought to continue slavery.

His source? Setting the Record Straight: American History in Black and White, by David Barton. This conservative evangelical, a lecturer at Beck University, is not an authentic historian. But he says what Beck and the Tea Party want to hear. It’s unthinkable that the Founding Fathers were racist, so let’s just totally rewrite history. To clarify the historical record, the North did not want blacks to count at all because they knew blacks could not vote and sought to limit the South’s Congressional representation to abolish slavery. The South wanted blacks to be considered full people so they could extend their grip over legislation and continue slavery. The three-fifths compromise therefore limited the South’s influence but also gave it far greater power than it would have had if blacks were not counted at all.

You can see the logic behind Barton and Beck’s spin. It’s clever, however absurd. The Founders and the South really wanted to get rid of slavery because they love freedom and democracy. Accordingly, they sought to limit the South’s power through the three-fifths compromise. The North, and by extension liberals, are the real racists because they wanted the blacks to be counted as full people and give the South excessive control.

One wonders, if the Nuremburg Laws had been written by the Founding Fathers, would Beck find a way to spin it as favorable to the Jews? The revisionism in this country’s mainstream is awful enough. Most Americans don’t seem to realize that our Founders not only stole land from the Indians but committed a calculated campaign of genocide to make America “free of blot or mixture,” in the words of Jefferson, through “the utter extirpation of all the Indians in the most populous parts of the Union,” according to Revolutionary War hero and first secretary of war General Henry Knox. Even those who do acknowledge this dark reality generally explain it away as something that everyone was doing in those days.

But Beck and Barton take it to a whole new level. They do not merely excuse oppression but present it in a positive light. Politicians do this, of course. From Madison’s characterizing the extermination of “our Indian neighbors” as the fruits of a “benevolent system” that “preserved peace and is more and more advancing habits favorable to their civilization and happiness” [http://www.presidentialrhetoric.com/historicspeeches/madison/stateoftheunion.1809.html] to the Bush administration’s agenda to “spread freedom and democracy to Iraq and the Middle East,” it is the job of politicians to distort reality to preserve and justify their use of power. It is the job of propagandists to regurgitate these themes.

You won’t hear an anchor on CNN try to justify slavery or any laws that upheld slavery, though when it comes to Iraqis and Native Americans the record is depressing. But Beck knows no bounds. His empire lives on, but his FOX show was the main source for disgusting revisionism and nasty calls to hatred aimed at nearly everyone except the Tea Party. The next time you question how hateful and diabolical Beck really is, just try having a conversation with one of his followers to see his poison doing its work. Ultimately Beck fans will listen to him wherever he’s on the air. But the death of his FOX show means fewer people will be subjected to his provocations and lies. This can only be positive.