Greta Thunberg is Angry and Not Holding Anything In

Thunberg's lack of social skills has helped her succeed. 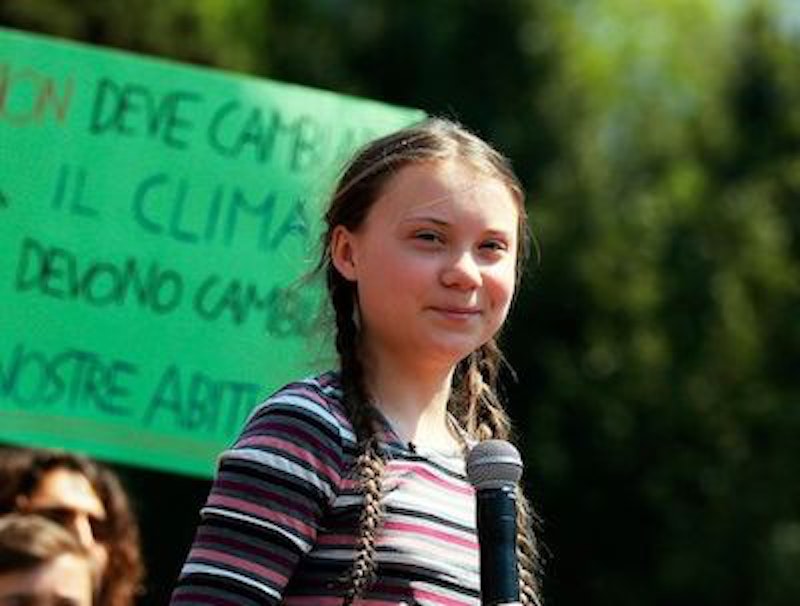 Swedish teenager Greta Thunberg, by her own admission, worries more than most people, and what worries the the waiflike 16-year-old with the uninflected voice and affectless demeanor the most is climate change. And even though she's charisma-free, the young Swede possesses nearly-hypnotic powers of persuasion owing to her sheer doggedness.

Thunberg, who's been diagnosed with Asperger's, persuaded her mother, a well-known actor in Sweden, to give up flying even though it hurts her career. The young activist also converted her father to vegetarianism—”meat is heat” is a favorite slogan of the climate warriors. Recently, Thunberg's become the spiritual leader of a global, militant youth movement with no patience for the current languid pace of reducing greenhouse gas emissions. A wing of that movement, Youth Strike 4 Climate, has in recent weeks partially shut down cities across the UK with street protests. Similar demonstrations have been taking place all over the world.

That's a lot of influence for a socially awkward girl who months ago sat silently in the back of the classroom. The Nobel Peace Prize nominee began her career as an activist on August 20, 2018 when she took a hand-painted sign and some homemade leaflets to the parliament building in Stockholm, vowing to “strike”—stay away from school—every day until the Swedish national elections. Thunberg's not good with people, which is why she began her protest solo, but people soon began to join her as she sat in front of parliament.

And then something remarkable happened.

Thunberg became an international phenomenon nearly overnight. In December, 2018 the then 15-year-old gave a speech at a UN climate conference where she lectured the adults as if they were miscreant children: “You only talk about eternal economic growth because you're afraid of being unpopular. You are not mature enough to tell it like it is. You leave that burden to us children.” At the World Economic Forum in Davos in 2019, she cooly informed the world's glitterati that they love to celebrate their success, but that success “has come with an unthinkable price tag.” On Tuesday of this week, Thunberg gave the British MPs a dressing down, scorching them repeatedly with lines like, “You don't listen to the science because you are only interested in the answers that will allow you to carry on as if nothing has happened."

Thunberg's lack of social skills has helped her succeed. Not seeking the crowd's approval, she delivers withering assessments of the numerous character flaws of powerful adults right to their faces in a deadpan voice, as if she's telling them what the weather will be like tomorrow. The latest ritual among the progressive element of the power structure is to eagerly seek out the precocious activist’s lashings as a soul-cleaning penance for not having thought enough about the woeful state of the planet they're passing on to future generations.

But when a child catapults to fame in the manner Thunberg has, there are bound to be suspicions that a cult's emerging. Her youthful earnestness and affliction could contribute to her being treated as a sacred scared cow who's not to be questioned, like the Parkland high school shooting survivors who emerged from the tragedy as revered voices in the anti-gun movement.

Spiked editor Brendan O'Neill, who has a vigilant eye for the Left's sacred cows, delivered a scathing broadside to Thunberg and her disciples in a fashion some are objecting to. In his most recent column, the gleeful debunker of progressive foibles called Thunberg a “millenarian weirdo” and compared her to the 17th-century Puritan witch hunters in Salem, Massachusetts. He also called her a “poor young woman” with a monotone voice.

Calling someone afflicted with Asperger's a weirdo with an odd vocal delivery handed O'Neill's many detractors the opportunity to trash him for being insensitive about a child. The Guardian’s George Monbiot, taking exception, went on Twitter to point out that Spiked takes money from the Koch brothers without divulging it to its readers. The suggestion’s that the publication accepts dark money to help create the type of unregulated world that billionaires can carve up into fiefdoms they can run without interference.

In calling Thunberg a millenarian, O'Neill's suggesting there's a religiosity in her urgent calls for drastic reduction in carbon emissions. By pressing, with hellfire and damnation rhetoric, for a denial of the fruits of industrialism (driving, flying, eating meat) in the narrowing window of time that's available to fix things, she's saying that redemption can be achieved, ushering in the 1000-year period of supernatural peace and prosperity as described in the Book of Revelation.

What good liberal, who's already led a nice life free from the depredations of climate change, will tell a passionate 16-year-old that her doomsday preachings are an overblown fantasy embraced by the Davos crowd as a means of expiation of their past sins? That's part of Thunberg's power, along with her earnest belief that the lives of all 16-year-olds are endangered by the apathy and cowardice of older generations. The young Swede's cold-eyed apocalyptic vision's catching on, both among youths concerned about their futures and the elders they often blame for selfishly compromising that future.