We need secrets-exposers, even crazy ones. 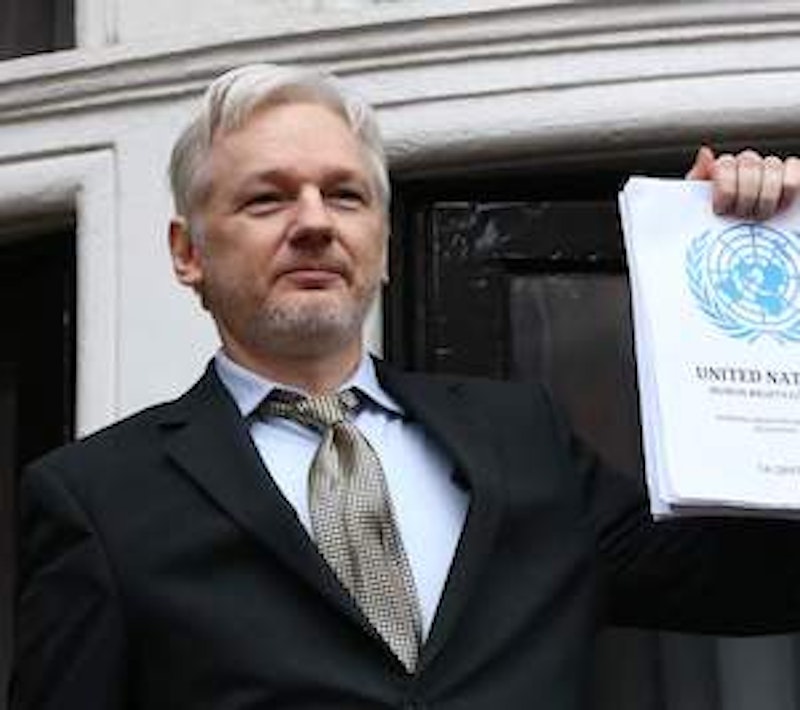 When Julian Assange was hauled out of the Ecuadoran embassy, he was carrying a copy of Gore Vidal’s History of the National Security State, which is smart advertising both for the book and for Assange’s worldview. It’s enough to make one wonder what book one would like to carry if and when one is arrested.

A few years before the 2006 launch of WikiLeaks, an activist hacker even stranger than Assange ran afoul of the U.S. government, in the paranoid environment just after 9/11. England’s Gary McKinnon hacked into NASA computers and took a look around, hoping to find evidence that the agency had been erasing UFOs from official photos. In retrospect, when he was arrested, he probably should’ve been carrying a book similar in spirit and title to the one Assange carried, such as historian Richard Dolan’s UFOs and the National Security State.

McKinnon claims he saw one photo of an object that did not look man-made, apparently in orbit around Earth, but he was found out before he could do any more snooping and his electronic connection to NASA broken. The panicked U.S. government made a great effort to have him extradited from England, calling his hacking one of the worst cybercrimes on record, but lawyers in England managed to keep him on their side of the Atlantic by claiming, implausibly but effectively, that he was too autistic to extradite humanely.

Like UFOlogy historian Dolan, McKinnon can’t claim to have clinching proof of aliens existing (nor do I, by the way), but both men claim to be very confident government sometimes covers up information on the topic of UFOs, whether such objects are ultimately exotic or mundane, and wherever they might come from. That’s odd, to put it mildly, though one can imagine relatively mundane explanations, such as a desire to confuse the Russians, without immediately accepting more world-altering theories. More important, though, we have a right to inquire about such things no matter what the answers prove to be.

Closer to Earth again, someone on the brink of being arrested today due to exaggerated terrorism accusations might want to be seen during his hypothetical arrest toting a copy of Max Blumenthal’s new book The Management of Savagery: How America’s National Security State Fueled the Rise of Al Qaeda, ISIS, and Donald Trump. Blumenthal is just as disliked by some as Assange and McKinnon (some of his detractors showed up at a talk he gave this week at New York City’s People’s Forum), but like those other two snoops he’s arguably an inevitable, perhaps necessary side effect of government’s lies and manipulations.

His beat isn’t surveillance or UFO disinformation but the incestuous connections between the U.S. military/intel apparatus and the very foreign policy menaces we claim to be quelling. Without claiming that every massacre or foreign policy disaster is an inside job or part of a sinister master plan, Blumenthal traces the U.S. foreign policy establishment’s habit of picking the arguably-less-evil side in foreign fights, then giving lots of weapons to that side until it becomes so reckless, violent, and drunk with power, there’s no compelling case for respecting U.S. influence in the targeted region (Syria lately, and from time to time for about a century and a half, Latin America).

Purported goals such as protecting democracy get shredded and the architects of the disasters tell themselves they’re still doing a good job because some lesser goal such as liberating a few oil fields or killing a few socialists is attained. Sometimes the goal is merely instability, the rationale being the prevention of a strong, hostile state coalescing—and the bloody alternative is permanent civil war.

With more people inured to combat, blowback happens. It happens partly because if your small section of the bureaucracy (which spans the public and private sector in multiple nations) is profiting, or at least watching its plans come to fruition, it may stop paying attention to the situation by the time other people, particularly innocent civilians, have to reap other, more negative consequences of your actions. Back jihadists to stymie the Soviet Union in Afghanistan in the 1980s and—unjustly—you may not be around to be tasked with picking up the pieces after 9/11. Or, as Blumenthal said in his Forum talk, maybe you are still around but, like Zbigniew Brzezinksi (who was around until two years ago), you think the occasional terror attack is a small price to pay for toppling the Soviet Union.

After seeing churches attacked in New Zealand, Sri Lanka, and France—whether or not Notre Dame was part of the recent spate of religious arsons and vandalism cases there—it’s always tempting to revert to the grand “religious war” or “clash of civilizations” narrative. Seeing graphic evidence of the other side’s fascist leanings brings out our own, tragically. But it also makes it possible for the blandest, coldest of manipulators, such as intelligence bureaucracies, to sit back bean-counting and weapons-distributing while the plebes fume at each other’s holy books on Twitter, raising attention-grabbing clouds of anger that easily conceal boring things like the budget for black ops.

One hates to end up a conspiracy theorist—like the neurotic, pattern-seeking main character played by Andrew Garfield in the fun but not widely distributed new comedy film Under the Silver Lake—but whatever government bureaucracies’ main motivations, one can see that they always end up sooner or later mired in secrecy, hiding their own past mistakes, and sooner or later trying to silence their critics. Critics have a tendency to get in the way of the plan, whatever it was.

(Sometimes the best we can hope for is that rival bureaucracies, or rival conspiracies, will reach a stalemate that gives the rest of us a breather. Did you sense that happening for a moment when the Democrats and intel agencies realized the Mueller Report hadn’t taken down Trump or the Russians? Pauses like that may be the closest thing we get to sanity nowadays, before the squabbling resumes.)

Keeping the bureaucracies addled may at least keep them humbled. And the less grandiose their plans, I suspect, the safer the human race will be. Never let them grow so comfortable as to think they face no critics, whistleblowers, or cataloguers of their crimes. If they start thinking there are no cranks out there keeping an eye on them, there’s no telling what they’ll do.