Shoot for the Moon, Land on the Sun

A snap analysis of the Democratic primary field. 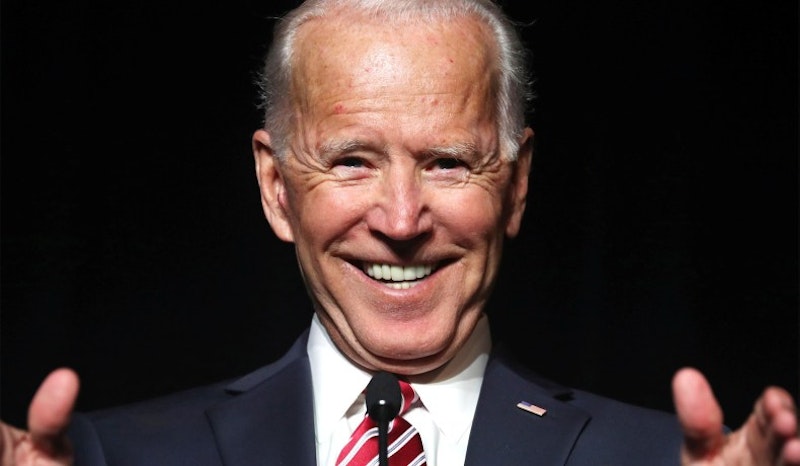 I haven’t written about the Democratic primary yet, and with the first debate only a month away, might as do some scattershooting now that all of the candidates have announced. I refuse to believe anyone getting in after this point stands a chance of polling high enough to warrant even a passing mention on CNN or RealClearPolitics. This list follows the ranking of RealClearPolitics’ aggregated polling data.

Joe Biden: I already won 20 bucks when he decided to run, and now I’m taking bets on when he makes his first major gaffe. I’m not talking about unfortunate graphic design; I’m talking slurs. He’ll call Trump a “motherfucker,” no doubt. But he’ll have to deal with Bernie Sanders first. Flash back to Jesse Jackson and “Hymietown”—you think Biden won’t accidentally call Sanders an obscure racial slur? T-minus two months until the first debates when he loses his shit. But he’s favored by the media, the donor class, and most importantly, black women. Hey, it could be worse right?

Bernie Sanders: Born under a bad sign. A shining light dimmed by defeat against HRC in 2016, when America was robbed of the debate it deserved: Sanders vs. Trump. He would’ve defeated Trump in 2016, but that load was blown. Sanders continues to poll high, but with so many men worried about coming off as “Bernie Bros” and supporting Elizabeth Warren with suspicious enthusiasm (though they certainly aren’t worlds apart, like the other female candidates below), I don’t think he’ll make the distance.

Kamala Harris: Jesus, she’s still polling this high? Where’s she been? I haven’t seen or heard much from her since she lied about listening to Tupac in college. She had a promising start but is going nowhere: too centrist and too loaded with prosecutorial baggage to win over any Sanders or Warren leftists, leaving her closest analogues, Pete Buttigieg and Biden, all of her potential support. Being a black woman just isn’t enough in such a crowded field. Maybe next time, or never. Three strike rule, right?

Elizabeth Warren: The go-to choice for those more interested in electing a woman than electing a leftist like Sanders. Warren is further to the left than everyone else and aesthetically she’s a perfect replacement for HRC: same kind of woman, almost as bad of a campaigner (though her stiffness and inability to keep up betrays an overly earnest sensibility, instead of the dead-eyed psycho Mrs. Roboto vibe of Hillary “I’m just chilling in Cedar Rapids” Clinton. I could see Biden making a pass at her on stage, or perhaps “accidentally” getting a mouthful of her hair as they shake hands, which would eliminate him—or would it? Biden’s popularity shouldn’t be surprising, but maybe it won’t be “her turn” after all.

Pete Buttigieg: Victim of recent right-wing smear by agitator Jacob Wohl, who was discovered in a hipster coffee shop writing a fake #MeToo story about the Indiana mayor. Cory Booker probably hates him for obvious reasons. A boring candidate, mealy-mouthed centrist with Obama accoutrements (has read Ulysses, speaks half a dozen languages, thinks Radiohead’s best album is Hail to the Thief—he’s right, by the way). Now that Biden’s in the race, Buttigieg’s calm specifics free style has no place. People clearly want “fighters” (ugh), which Sanders and Biden certainly are. Warren is too, if only because she’s policy specific. She’ll probably founder in the debates and definitely embarrass herself on the campaign trail, but I don’t think this is Buttigieg’s year. I didn’t think an openly gay white man would perform so well this early on, but as with Trump, people probably hold their prejudices tight and would never admit to a pollster (where are they?) that they’d never vote for a gay man. But what about a gay woman? Let’s get someone in there and find out.

Beto O’Rourke: Manic unattractive hare, not to be trusted around striped cats or small men in top hats. He became a joke practically as soon as he announced, and his reputation plummeted from where it was last fall when he almost beat Ted Cruz in the Texas senate race. But he lost, he’s mayo as fuck, and faker than a three-dollar bill. Go munch on a carrot somewhere. Perhaps New England? Maybe he’ll get to know the unique sorts of birds that live up there…

Cory Booker: I saw him on PBS a couple of days ago, sort of half watching, had it on in the background, and by the end I thought “he gives a good interview,” proving how dangerously gullible I am. The next person interviewed wondered if Booker regretted not running as “Mayor Cory,” but of course Buttigieg and Booker have more than elected positions in common. Having a beard—even if it is Rosario Dawson—is so behind the times in 2019. Apparently no one gives a shit if you’re a gay white man, but Booker would’ve been sidelined by his monied interests before his secret sexuality ever came into play.

Amy Klobuchar: Like Beto, known for absurd, inexplicable behavior, like eating a salad with a comb. She threw shit at her staff too, which could be spun as a badass #girlboss move, but there are just too many women polling ahead of Klobuchar. Besides, do you even know what she looks like? I’ve no idea, just like most American voters. She’s going nowhere.

Andrew Yang: A meme candidate, going nowhere for now but who knows—besides gaining name recognition pretty quickly, his UBI proposal and anti-circumcision stance make him a favorite among… people you wouldn’t want to be stuck with in a bus depot.

Tulsi Gabbard: How does this maniac have any support among Democrats? Doesn’t a well-documented past as a homophobic anti-gay activist automatically disqualify you? Who cares if she apologized, or if she’s “evolved”—as if. This isn’t Pokémon.