Finland Just Keeps Getting Happier and U.S. Can't Keep Up 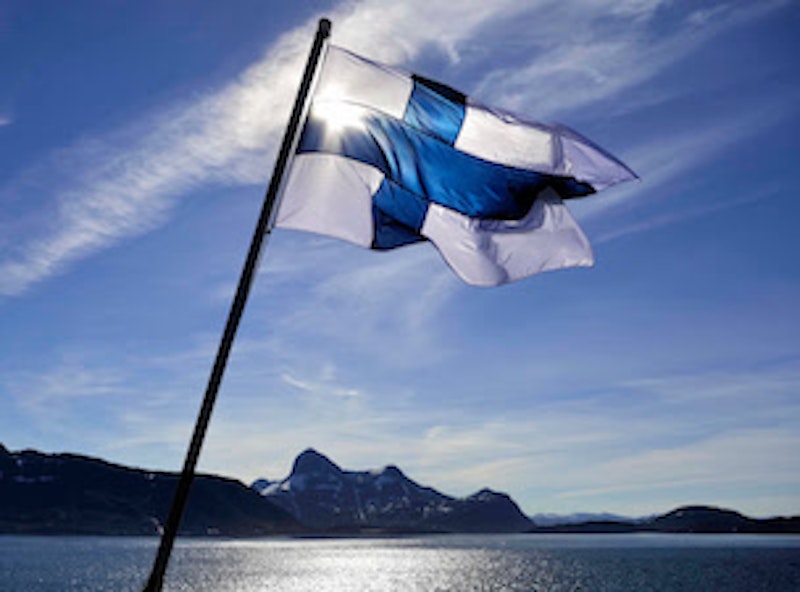 The UN-funded World Happiness Report for this year's out, and once again dark, cold Finland tops the list (the criteria are GDP per capita, social support, healthy life expectancy, freedom to make life choices, generosity and freedom from corruption), followed closely by Denmark, Norway, Iceland, and the Netherlands. It must be great to know that you live in the happiest nation in the world, but of course we Americans have no such dreams, despite our nation's reputation for greatness. The US is ranked 19 this year, down one from number 18 last year. Soon we’ll be out of the top 20, as we're not currently on a happiness trajectory.

Among the things the US is built for, promoting the kind of happiness the Finn feels is well down on the list. Would a nation built for happiness have a state whose license plates read, “Live Free Or Die?” That's “die,” not “fight.” The flinty Americana this motto represents doesn't involve the government lending a helping hand for your contentment.

Why is Finland a modern-day Valhalla? The Finns don't have to stress over medical bills they can't pay or worry about an education they can't afford. Their government takes care of that. Contrast that with the U.S., where not long ago we didn't have Obamacare, and then we had it, and then we had the executive branch trying to destroy it without having any replacement plan, even though the President campaigned with a guarantee that nobody would lose coverage. It's hard to find peace of mind in such a chaotic environment. Only in America could depriving people of their health insurance even be considered a possible political winner.

One of the Happiness Report’s criteria is the freedom to make life choices. While Americans obsess over their freedom, it’s not that kind of freedom. American freedom’s the right to own a gun or stand on a soapbox and say the president belongs in jail. But when you have to stay in your crappy job instead of starting your own business because you need health insurance, which for some reason’s tied to your employer, then what kind of freedom do you really have? Your AR-15 can't protect you from the life of quiet desperation you may end up with.

But the Finns aren’t entirely dependent on their government for happiness. Getting out among the pine trees is a big part their life. People take a dip together in cold Arctic waters or go cross-country skiing, and then they relax with others in a sauna. It adds exhilaration to their lives.

One measure of happiness is the gap between one's expectations and reality. The Finns, not fixated on what they could have, don't dream of being billionaires like Americans. Their emotions, as in other Nordic nations, are more modulated, meaning they value everyday contentment over the prospect of someday being flushed with joy. A New Economics Foundation study found that Finns score very high in the “absence of negative feelings category,” but about average in the “positive feelings category.” It's like the car they prefer is the one that can hum along steadily at 65 MPH even though it lacks the thrills of a high-performance vehicle that can go from zero to 65 in 3.5 seconds.

It's more about having a life with a work/leisure balance allowing for substantial family time, sporting activities, volunteering, and other face-to-face pursuits that boost well being. The face-to-face part of life in the U.S. is being slowly strangled by digital devices. When a friend of mine who's a high school teacher told me that when she goes into the cafeteria it's nearly silent, I found it chilling. I think back to the lively scene in my high school cafeteria and have to wonder how it's going to turn out for these kids. The damage done isn't even understood, so the appropriate countermeasures aren't being instituted.

America's too ambitious to provide its citizens with Finnish-style happiness. We're addicted to grandeur, so the quotidian aspects of life get overlooked. There's a reason Trump ran on MAGA rather than “Make America Happy Again,” which would’ve sounded wimpy to his supporters. Americans want achievement and world domination, not safety.

The U.S. is better at nurturing dreams than tending to mundane realities. Leave that to the pedestrian nations. Many Americans are turned on by the thought of their government creating a Space Force, but disgusted by the idea of it promoting egalitarianism. Finland, lacking hegemonic ambitions, doesn't have soldiers returning from endless wars with ravaged minds and bodies who often end up in the streets because the government's too callous to recognize their sacrifice. Finnish people aren't turning to opioids because the work is no longer there and there's no safety net for them. The Finns play by the rules. Someone like Trump running for office would get almost no votes. Finland's built for comfort not speed, and America's the mirror image. We get more thrills, but walking on a tightrope for long distances isn't the recipe for happiness.