AIDS also started off as a so-called anomaly. 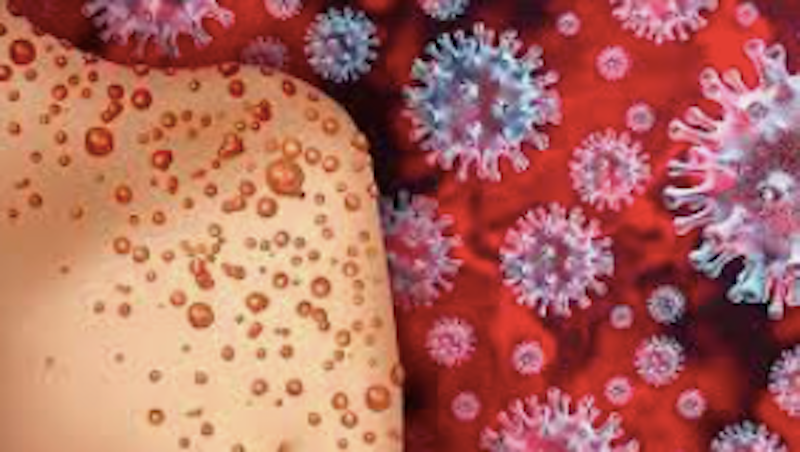 Now that the monkeypox has been identified as being linked to gay male sexual activity, expect to see more claims like this one made on Twitter by an account called "Mary Fernando MD": "There are lots of questions about #monkeypox but I’ll tell you—with absolute certainty—it’s not a ‘gay disease.' Monkey Pox (sic) is caused by a DNA virus and it doesn’t care about the personal lives of its victims. Our #LGBTQ communities are at risk—so stop this nonsense."

I'm no expert in infectious diseases, but past experience has taught me that getting to the root of this virus will take much more than reading the tweets of "experts" like Mary Fernando. Preliminary research tells me that the disease is currently infecting mostly gay and bisexual men, and that it hasn't previously been considered a sexually transmitted virus. Mary Fernando's saying that the virus doesn't "care" about the personal lives of its victims, but it appears that the personal lives of its victims doeshave a connection to the spread of the virus, in that one's sexual acts are a part of one's personal life. And now there's some evidence that monkeypox is sexually transmitted.

The Atlantic has reported that monkeypox has disproportionately hit gay and bisexual men, adding: "And as public-health authorities investigate possible links to sexual or other close physical contact at a Pride event in the Canary Islands, a sauna in Madrid, and other gay venues in Europe, government officials are trying hard not to single out a group that endured terrible stigma at the height of America’s AIDS crisis."

I don't want public health authorities trying hard not to "single out" any particular group, regardless of the stigmatization it once endured during the AIDS crisis. Single out that group, identify why it's spreading within the group, and then develop a plan to halt the transmission—a plan that may curtail the sexual freedom of that group. Sacrifices may be necessary, even if they're not evenly distributed. Having (like everyone else) just endured the misinformation overload of the Covid era, I’ve no patience for any rhetoric that mimics the utter stupidity we saw when progressives were calling people who claimed (probably correctly) that the virus was developed in a Wuhan laboratory "racists."

If gay people get "singled out" as victims of this disease, it's going to help gay people avoid contracting the disease, as long as they're willing to modify their behavior. If gay people had been singled out more as AIDS was in its inchoate stages, they'd have experienced more pressure to abstain from the anonymous, bathhouse sex that would soon turn that disease into a full-blown health crisis. What's worse, some hurt feelings, or a plague that became the leading cause of death among young, gay adults in the United States?

On Twitter, Fernando said this to me: "You @SubBeck seem all over my tweets, quoting it (sic) and answering. If you are gay, we can assure you that #monkeypox is an infectious disease and can be spread by contact like most of them. You’re no more at risk specifically because of your sexual orientation." Technically, this is true. "Orientation" is distinct from acting on that orientation. Still, I don't think this is prudent advice coming from an M.D., who should have my health in mind, instead of peddling feel-good baloney. The World Health Organization, which Fernando told me she trusts, has announced that the most recent surge in cases appears to have been spread among men who have sex with other men. So if I were gay—as the doctor oddly put it—I think I'd do some reading before hitting the next gay bar. Monkeypox, while not as serious an affliction as Covid, doesn't look like much fun, unless you enjoy lesions. Maybe take a hiatus from the cruising until the situation's clarified. Sorry if that's construed as an anti-gay-sex opinion, but medicine often tastes bitter.

The media and progressives repeatedly assured us in the 1980s that AIDS wasn’t a "gay disease" that was particularly associated with homosexual sex, even though it was. In 1990, AIDS caused 61 percent of all deaths of men aged 25-44 in San Francisco, and it's no coincidence that it happened in that gay mecca. I was living there at the time, and I saw the denial every day. Despite overwhelming evidence to the contrary, straight people during the AIDS crisis were constantly told that they faced the same risk of contracting the disease as gays did, and to suggest otherwise would make one "homophobic." In other words, they were told lies to avoid stigmatizing gay people, whose promiscuity in cities like San Francisco was off the charts. We were fed falsehoods about AIDS so as not to "stigmatize" the "gay community," but I prefer a factual approach when a major health issue's involved, even if feelings get hurt.

What those in positions of influence should be saying is that monkeypox, for reasons related to sexual activity, is primarily spreading within the gay community at this time. They don't have to say it's a "gay disease," but they shouldn't shy away from pointing out that monkeypox may currently be a sexually-transmitted disease. The media and public officials are downplaying the scale of this virus, just as, in the 1980s, they were calling AIDS an anomaly confined to gay men in a handful of cities, even though the pathogen that caused it had already traveled well beyond the confines of NYC's Christopher Street and San Francisco's Castro district.

History has taught us an important lesson. All we have to do is heed it.