There's something about white voters that you really should know. 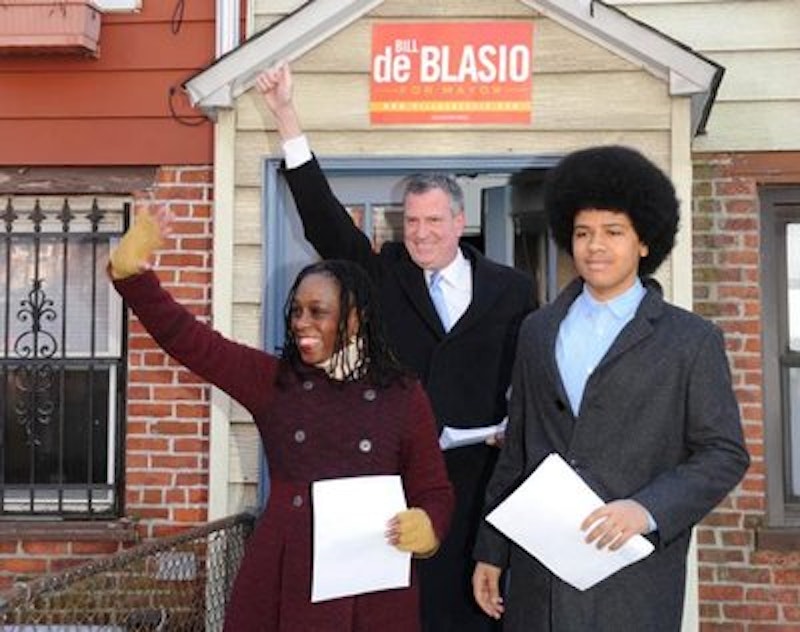 Bill de Blasio's son looks like a kindly, intelligent lummox, much as his father does. The boy has an immense Afro, but his voice is white, the kind of voice contestants have on game shows. Gawker says that the ad in which the boy told New York voters why his dad should be mayor, an ad that swamped the airwaves and apparently turned the election, actually ran just as de Blasio's support was peaking. After the commercial went on, de Blasio lost a few points in the polls. Luckily he was so far ahead that it didn't matter.

If the above is true, maybe the kid's ad gets so much credit just because people like looking at it. “Feel good” has been done to death, and the ad has standard feel-good lighting and music, plus shots of family around the kitchen. It should fall dead on the eyes. But the nice giant boy who is black but also white lets us take a look at him and hear his unstressed, mildly inflected voice as he talks about his dad. We see the boy and dad side by side, like two hillocks, and we think they're really alike. One's a dark kid with an Afro and the other is a clunky white guy with belt and shirt cuffs. But they're really alike.

Here's where we are, you say to yourself.

Seeing de Blasio's son reminded black voters that “stop and frisk” meant something in the de Blasio household. Seeing him reminded non-black voters that big kids with Afros weren't necessarily scary, and that this one loved a white man, his dad. White voters like to be reminded of things like that.

Of course, many whites and others do suffer from a low threshold for black face overload. The sight of a young black man can jolt them, and it can do so despite every expectation the non-blacks in question may have of themselves. In the back of their minds they wilt and want to get away. If de Blasio lost votes after his son's face went on the air, I suspect this phenomenon is the culprit. The wilters may have liked the idea of the candidate with the mixed-race family. But when they saw the black kid, they flinched. Even his voice didn't reassure them. 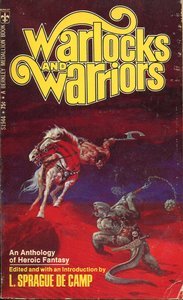 He wrote fantasy too, including specimens with the same light and dry attitude as his science fiction. But he also wrote sword and sorcery, which is something else. It's a genre that's all gush. I think it did him some good.

De Camp edited a story collection called Warlocks and Warriors, with a cover that showed a man mounted on a stallion but leaning down toward a human-sized lizard with arms. The lizard is swinging a ball and chain mounted on a staff. The man has a scythe-like blade and muscles that make his back look like a rocky beach. There's something tricky about the scythe's configuration, something odd and cuneiform-like that's been done to the curve; it's a nice effect, alien and jagged.

The man, horse and lizard are posed on blood-red sand beneath a purple night sky. A shrouded city dreams on the horizon; a well-muscled girl wallows in chains lashed to the bones of a great dead lizard. The living lizard, the one with arms and a ball and chain, is wearing leather gear that includes a death's head emblem, from which dangles a sword, like the death's head was holding the sword in its mouth.

That's sword and sorcery. De Camp's preface to the book hit the same note. The preface is brief, and for the most part it's de Camp in the voice he always used, affable and lucid. But when he describes sword and sorcery, says what it is, he paints a song (so to speak). I loved it when I was a boy and I'm happy to get it onto the Internet here:

“This is a world where gleaming cities raise shining spires against the stars, sorcerers cast sinister spells from subterranean lairs, baleful spirits stalk through crumbling ruins, primeval monsters crash through jungle thickets, and the fate of kingdoms is balanced on the blades of bloody broadswords.

“Sometimes this world is that which, the author imagines, existed on this planet long ago, before recorded history began. Sometimes it is as he fancies the world will be in the distant future, when the sun has dimmed, science has been forgotten, and magic comes back into its own. Sometimes it is on another planet or in some other dimensional plane. In any case, here are gods, ghosts, demons, wizards, monsters, and real, heroic heroes. These are men of mighty thews, strong passions, indomitable wills, and keen minds, who dominate the stories through which they stride.”

It's springy, well-balanced prose that rattles through a list of things that would be neat to see: cities, lairs, sorcerers, beasts, thickets, “gods, ghosts, demons.” But when I was a boy it hit me like a rhapsody. I admire it even now. The passage lines up and deploys all the elements that make sword and sorcery what it is. Except one: girls. De Camp was straitlaced that way, but I was 12 or 13 and could fill in the material myself.

I think I read the preface before I read any sword and sorcery. The book, Warlocks and Warriors, was my first look at the genre, and I started at the preface to make sure I was oriented. What de Camp described sounded ideal to me, and that's what it turned out to be. I spent a couple of years reading and sometimes liking many books about men with swords facing strange dangers in bloody, far-off worlds. None of them were as good as de Camp's passage in the preface to Warlocks and Warriors.