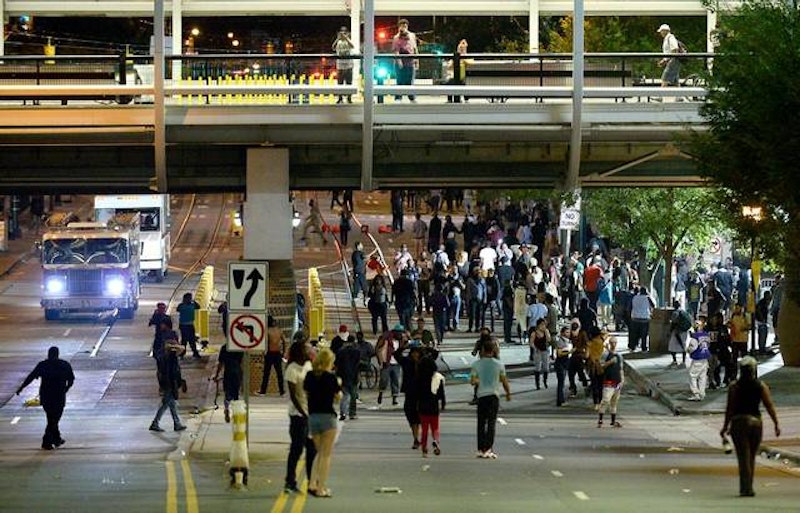 You’d think that people who support free speech would be vigorous defenders of the value of speech. But oddly, that isn't the case. On the contrary, when people defend speech, they often do so specifically on the grounds that the speech in question is worthless. Speech, to free speech defenders, is presented as a joke, the content of which is irrelevant, since it will affect no one.

Nick Gillespie, the editor of Reason.com, demonstrated this contradiction recently in a full-throated defense of Glenn Reynolds. Reynolds was briefly banned from Twitter after posting a picture of North Carolina protestors blocking the highway. Reynolds added the caption, "Run them down."

Gillespie delicately refused to comment on whether he thought that running down protestors was a good idea. Instead, he argued, that Reynolds was not really saying what he said, or that no one would think he meant for anyone to act on it. "Whatever you think of the tastefulness of his suggestion regarding the protesters in Charlotte," Gillespie writes, "the idea that he is seriously inciting any sort of actual or real threat is risible."

The problem here is that Reynolds wrote follow-up posts on his blog in which he makes it quite clear that he was completely serious. Gillespie quotes him: "Sorry, blocking the interstate is dangerous, and trapping people in their cars is a threat. Driving on is self-preservation, especially when we've had mobs destroying property and injuring and killing people." Reynolds is arguing that when protestors walk across a highway in front of your car, you should gun the engine, and let the bodies fall where they may.

The reaction on Twitter suggests that Reynolds' many fans and followers took him seriously. Numerous people echo his arguments for murder; protestors are a threat, the Twitter interlocutors declare. You need to save yourself by driving your car into them and injuring or killing them. Reynolds and his followers do not treat this argument as a "risible" suggestion. They talk about it coldly and directly, as what they should do, if they’re ever confronted with a protest.

Still, Gillespie insists that it's obvious that Reynolds' tweet is not a threat to murder protestors. As he said to me via email: "Nobody would be influenced by his tweet to run down protesters (with whom I sympathize as a libertarian who has for decades been commissioning, editing, and writing stories about police abuse). If somebody decided that Glenn Reynolds was commanding them to rent a car and drive it through a crowd of people, that nutjob is responsible for his actions, just as Mark David Chapman (not J.D. Salinger) was when he pulled the trigger on John Lennon."

Gillespie argues that Reynolds' statement doesn't rise to the level of true threat—which is probably true. But Reynolds is deliberately advocating for the curtailment of free speech rights. He is saying, on Twitter and in his blog that protests are illegitimate, and that protestors should be violently attacked. If you're talking about free speech issues, shouldn't that get a mention? Yes, Reynolds didn't actually attack anyone, but a climate in which violent acts against protestors are encouraged and justified surely makes protest more difficult and dangerous. Reynolds is making a case against free speech, and by all appearances doing his best to curtail the speech of others. Shouldn't libertarians care about that?

I'm sure banning Reynolds didn't do much good, and in general Twitter's scattershot approach to abusive speech is worse than useless. But if you're going to defend his right to speak, do it without pretending that his words don't matter. Reynolds wasn't joking; he's a man with a large platform encouraging his many followers to commit racist violence against people exercising their right to assembly and protest. He means what he says, and people who listen to him, and take him seriously, understand him perfectly.

"God help all of us who write a lot (whether for fun or for profit) the day that our words are endowed with magical powers to command our readers like some sort of zombie army," Gillespie told me. To which I'd respond, God help writers and editors everywhere if our chief moral commitment consists of repetitively denying the possibility that someone, somewhere, might actually listen to what we have to say.