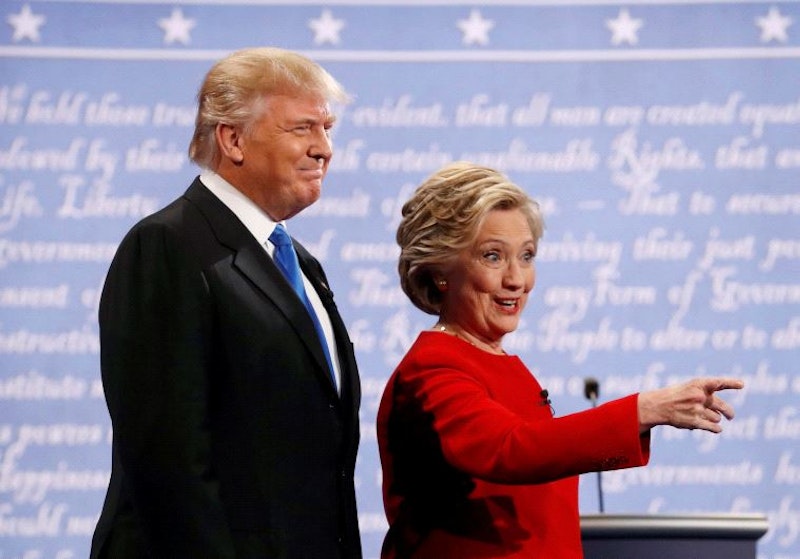 8:55—Lester Holt is not a professional comedian, but he’s almost as nervous as an amateur comedian.

9:00—Even these CNN panelists plainly know just how superfluous they are.

9:08—Donald Trump is struggling to focus, but remembered his flag pin.

9:10—After Clinton has painted a bold, bright vision of the future, Trump lunges straight for the apocalypse.

9:12—Just watching Clinton hold onto her composure, project a becalmed neutrality, and struggle to avoid flying into hysterical laughter is exhausting.

9:20—The first hints of rancor finally emerge, and Trump goes in for a third sip of water.

9:23—Trump has a big drum with "NAFTA" on it, and he's pounding it relentlessly. Twenty-three minutes: that's how long it took for sober, buttoned-down Trump to revert to the belligerent jackass the media has come to know, love, and count on for clicks.

9:30—This is 90 minutes long, with no intermission. Trump will have wiped himself out after 60 unless he smuggled some cocaine in, while Clinton's staying loose and hasn't so much as touched her water glass yet. Meanwhile, Trump takes another tip.

9:31—Oh shit, taxes. I've never seen Clinton laugh or smile quite this much; she has a lovely smile.

9:35—"You've got to ask yourself: why won't he release his taxes?" Clinton wonders, before heading on an oratorical strafing run that would crater Trump's chances in a traditional election season.

9:40—Turns out that Clinton invited an architect who Trump stiffed to the debate and tied it neatly into her working-class childhood, which is some next-level chessmaster shit.

9:41—Clinton very gently explains, as if to a small and petulant child, why he cannot have this thing he pretends to desperately want.

9:49—Clinton's expression when Trump rebuffs Holt's statement that "stop and frisk was ruled unconstitutional" is worth all the marbles.

9:51—Clinton self-indicts on the unspoken "super-predator" thing before Trump can—though he's probably gonna take the shot anyway, sooner or later—then spins it off into aspirational policy. Trump nods along like a stoned English sheepdog.

9:55—Trump deals the "super predator" card, as we all knew he would.

10:00—Turns out that birtherism was a major, all-consuming hurdle Trump had to overcome and put to rest in order to focus on saving America from itself. Who knew?

10:03—"Remember, Donald started his career back in 1973 being sued by the Justice Department for racial discrimination."

10:05—Clinton has spent much of this evening looking like the cat that ate the canary.

10:08—Trump pursing his lips and nodding as Clinton calls bullshit on Russian hacking and interference in this election—and his subsequent, sarcastic rebuttal—may be the  single most infuriating stretch in a debate full of them.

10:14—"We should have taken the oil," Trump asserts. "I hope the fact-checkers are turning up the volume and really working hard," Clinton chuckles.

10:18—If I went outside to smoke a cigarette right now, would I miss anything?

10:25—"A man who can be provoked by a Tweet shouldn't be anywhere near the nuclear codes," which makes too much sense for Trump supporters and a ridiculous number of undecided voters.

10:32—What a small-minded, repetitious, sexist bully this man is. How did we even get here?

10:35—Clinton figures “fuck it,” unloads the sexist deck on Trump.

10:37—The apoplectic fits of pique Clinton's unflappability is inspiring in Trump are beautiful, beautiful things to behold.