The new agenda is to accept terrorism like rush hour traffic. 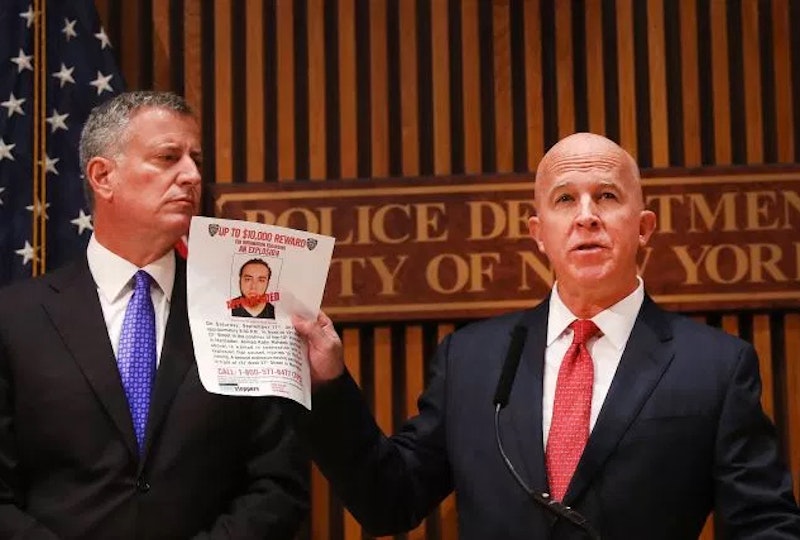 New York City mayor Bill de Blasio announced a couple of days after U.S. citizen and Afghani immigrant Ahmad Khan Rahami’s terrorist attack had injured 29 in his city that this was the time to bring in more Muslim immigrants.

The timing of the Mayor’s immigration comment, which had a forced, agenda-driven quality was odd. Many New Yorkers certainly wished for a brief period of reflection, at least, before plunging willy-nilly back into the quixotic pursuit of the multicultural dream.

The Mayor had just met with his London political and ideological counterpart, Sadiq Khan, who’d stated that terrorism was part of life in a big city now—sort of like rush hour traffic, perhaps. He wants terrorism to become normalized, as if it must be inevitable—which it is in his world—and de Blasio is onboard.

ISIS, as their “caliphate” shrinks, will devote more of its resources to waging war on the West via urban terrorism. The Mayor called terrorism ”vanishingly rare,” but ISIS has other plans. Ahmad Khan Rahami had a notebook, found by law enforcement, that indicates he was influenced by the late Abu Muhammad al-Adnani, infamous maker of videos calling on would-be jihadis to carry out attacks in their own countries. This is the future of jihadist terrorism, which no longer requires training trips to Syria.

The harsh and undeniable reality now is that the more Muslims immigrating to the U.S., no matter how well they are vetted, the more potential jihadis ISIS will have at its disposal. Jihadist attacks are the ones to fear the most, because their ultimate goal is to set off a dirty bomb in a major U.S. city. The Christian and right-wing terrorists the left ridiculously claims are equally dangerous have no such agenda.

The U.S. is now faced with a dilemma that it's unequipped to deal with, because it's impossible to deal with a powerful force you don't understand. The nation was built on immigration, and the principle that no one will be excluded on religious grounds. On the other hand, a sure way to minimize the number of internal jihadist attacks, which is the wave of the future, is to minimize immigration from one particular group—Muslims—something antithetical to established beliefs.

This is not a policy recommendation. It's simply a fact that, while politically incorrect, should be part of any debate, or cost-benefit analysis, on the topic.

There’s now a clear trade-off, for the first time in American history, between following long-standing guiding principles on immigration and protecting national security. Most of the people in this country have my experience. Their families came to this country from various countries, but none of their family members ever tried to kill innocent people because of their religion. Now we’re asked to accept the new paradigm that having a certain percentage of people in this country who want to kill as many Americans as they can is inevitable. That's a big leap, with potential for great danger. It’s “normal,” according to Sadiq Khan, who’s consorted with terrorists, but not to Americans, despite the Bill de Blasios of the nation pushing this narrative.

The left has made it impossible to address the relatively recent national security aspect of immigration policy, because you're an Islamophobe and racist if you do. They tell Americans that getting killed by a jihadist is less likely than being struck by lightning, but it's the wrong analogy, because people know ways to avoid lightning strikes. The uncertainty of terror attacks exact an emotional toll that can't be quantified. It's also costing billions of dollars that could be spent on improving lives to keep major American cities safe.

You don't have to go the full Donald Trump-route of excluding all Muslims to take reasonable precautionary measures, but the Bill de Blasio denial approach pushes people in that direction. More pressure could be exerted on the Muslim community to report possible terrorists if it wasn't made so politically incorrect. Those on the left could stop labeling anyone who dares criticize any aspect of a particular religion an Islamophobe, while other religions are fair game.

If Trump gets elected, it will unleash pent-up aggression against individual Muslim-Americans, which is immoral and unacceptable. If Hillary Clinton wins, we'll get more of the de Blasio approach.