America Is Weary and Waiting to Die

The Trump campaign is Russian Roulette for a scared and confused nation. 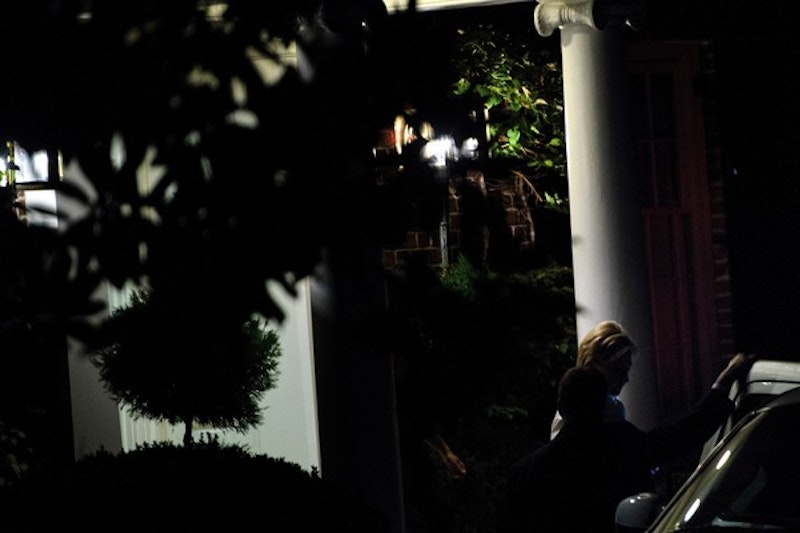 Hollywood is panicking about the possibility of a Trump presidency: “[Republican pollster Frank Luntz] told HBO partygoers that Hollywood Democrats are out of touch with the rest of the country. ‘Of the 20 closest people you know, how many of them are voting for Trump?’ he asked. Long pause. ‘Exactly.’” Everyone that doesn’t want Trump to win should be stuffing envelopes and knocking on doors because Hillary is blowing it, this election is too close for comfort and says a lot about her as a candidate. HRC is more of the same—fine by me, at least when faced with a potentially catastrophic alternative like Trump. Everyone clicking their tongues and dismissing Trump’s appeal right now are taking their comfort for granted, because yes, Trump voters walk among us. Many people you know may be flirting with the idea of voting for Trump, already secretly committed, and others won’t decide until they get in the booth. This is the “dark vote” that will decide the election: people that are too embarrassed or scared to admit they voted for the cartoon nihilist/fascist. Trump is Russian roulette for a sick nation with a wounded psyche that’s deranged to the point of suicide. 2016 America is characterized by three things: confusion, fear, and hate.

And the media is still as deluded as ever, fumbling and frothing at the mouth over Trump’s millionth offensive remark some 15 months after the start of his campaign. Regular physics do not apply here. Hillary and her organization are just as clueless and ineffectual, still holding fundraisers for whatever reason. Why? She doesn’t need more money, and it’s not as if they can blanket the airwaves with attack ads and act like that’s going to work. Trump doesn’t need advertising, and I’m not sure he even needs any “get out the vote” infrastructure to win. Turnout for this election might be extremely high just because of how crazy it’s been. Clinton is certainly confirming a lot of fears lately with more cancelled appearances and videos of her looking and sounding drugged and unwell. She could be the Bill Buckner of the Democratic Party come November, and if she loses, no doubt she’ll croak by January—how could anyone’s nervous system handled the whole world coming down on you like that?

James Kirchick had some good points in a piece for The Daily Beast provocatively titled “Blame Millennials for President Trump”: it’s worth noting that our generation (born, roughly, between 1984 and 1998) never knew the world during the Cold War, when American supremacy and success was essential to avoiding a nuclear holocaust or communist takeover. You’ve gotta cut Boomers skeptical of Bernie Sanders the Socialist some slack—they were raised when that word was synonymous with tyranny and bread lines. Kirchick says, “Millennials, by contrast, spent their early years blissfully unaware about the world and its dangers. That changed, of course, on 9/11. But unlike other age groups, over half of us believe U.S. actions might have provoked those attacks. […] Millennials are also deeply skeptical—like Trump—of American exceptionalism. A 2011 Pew poll found that only 32 percent of millennials believe America is superior to other countries, compared to 64 percent of baby boomers.”

This all makes sense: the Internet and particularly social media have dismantled traditional pipelines for propaganda, and modern youth spends time online reading and figuring out the world. You don’t just have American Sniper—you have Loose Change, too. But Kirchick is right that this election is currently up in the air because of a lack of perspective and “historical understanding": “Millennials, particularly American ones, are too young to have any memories of the Cold War, never mind World War II, when fascists ruled Europe and millions of people died as a result. Trump’s echoes of fascist movements past has no resonance with us.”

Once Sanders conceded in June, I noticed an enormous drop-off in political talk, posts, and activity from many friends and acquaintances. Most of them were never vocally political before, and now that we’re three months deep into having Clinton as the nominee, the mood is oddly complacent and calm for such a significant day that’ll be here in less than two months. I think a lot of people have checked out at this point completely, either weary and waiting to die, or taking it for granted that it’ll all work out in the end. If Clinton has an episode at the debate next week, forget it.