The GOP is Today’s Know Nothing Party

Their hyper partisanship is paralyzing Washington. 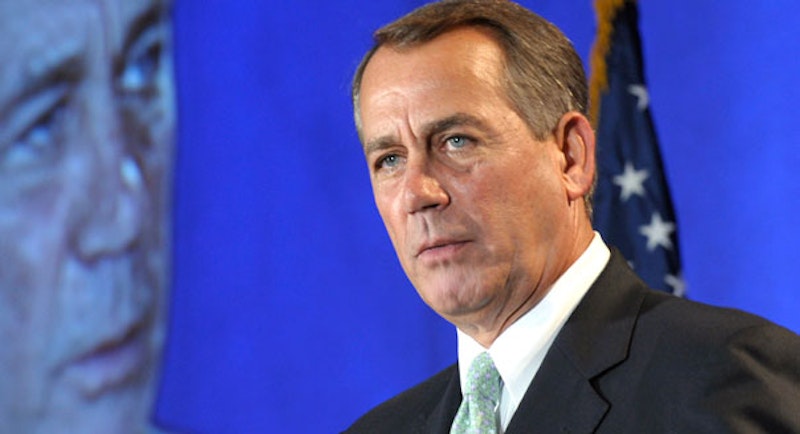 The Republican party of today resembles Seinfeld: It’s about nothing. The GOP’s only unifying theme is the destruction of Barack Obama’s presidency and the dismantling of the Democratic constituency. Beyond those stated objectives, the good of the nation be damned. Listen to the Republican budget debates in Congress and then tune in to Republicans during the recent special session in Maryland—or any GOP-dominated state house—and it all sounds as if America has a severe case of echolalia.

That’s because the GOP playbook is being written and underwritten by a handful of billionaires and the conservative front-groups that they fund, i.e., the billionaire Koch brothers and the American Legislative Exchange Council. And now Joe Ricketts, founder of TD Ameritrade and an owner of the Chicago Cubs, was reported considering using $10 million of his personal fortune to pay for a racially provocative advertising campaign linking Obama to the Rev. Jeremiah Wright, the controversial black preacher.

But the ad campaign was rejected by the GOP, Ricketts and his Super PAC after The New York Times reported that Ricketts was approached with the idea by a group of freelance Republican ad makers. Sound like Willie Horton all over again? As irony would have it, Ricketts’ sister, Laura, is a lesbian activist and a major Obama fundraiser.

Washington is a company town. Its only product is itself. Hear House Speaker John Boehner (R-Ohio) on raising the debt ceiling: “Yes, allowing America to default would be irresponsible. But it would be more irresponsible to raise the debt ceiling without taking dramatic steps to reduce spending. I’m not angling for some higher office. This is the last position in government I’ll ever have. I haven’t come this far to just walk away.” Translation: Republicans will once again take America to the brink of a credit default and a downgrading of its credit rating which means it would have to pay higher interest rates to borrow money. This is exactly what occurred in America during the last debt ceiling crisis and what is happening in Europe right now.

Now listen to the echo of Maryland House Minority Leader Anthony J. O’Donnell (R-Calvert), a candidate for Congress from the Fifth District: “We are raising spending, we are raising taxes and we don’t need to.” O’Donnell was defending the so-called “doomsday budget” that would have gone into effect without a companion package of $512 million in tax increases that were enacted in a special session after the General Assembly botched the job during its regular 90-day meeting. And consider the seconding sentiment of Del. Wade Kach (R-Baltimore County: “Tax increases are not the answer. They are not what is going to solve the problems in the state of Maryland.”

But for pure chutzpah, or maybe plain mischief, no elected official can top the Tea Party’s current poster boy in the U.S. Senate, Rand Paul (R-KY), son and protégé of Rep. Ron Paul (R-Texas). Rand Paul introduced a Republican budget that goes even beyond the punishing proposal of Rep. Paul Ryan (R-Wis).

Paul’s budget would have ended Medicare in two years for everyone, cut the Social Security benefits by nearly half, eliminated the departments of education, energy, housing and commerce, cut programs for the poor, and, of course, cut taxes for the rich by reducing tax rates to 17 percent and eliminating taxes of capital gains and dividends. Paul’s budget proposal was one of 18, including Obama’s, that were rejected by the Senate in a single day.

Ryan’s budget, which has been embraced as “marvelous” by GOP presidential candidate Mitt Romney, would cut virtually all social programs, mainly for seniors, children and the poor, as well as privatize Medicare and Social Security.

Now back to Boehner. Boehner’s itching for another fight, not so much over raising the debt ceiling as to undo the deal that was cut during the last down-to-the wire battle. Essentially, Boehner and the Republicans want to get rid of what is called “sequestration,” a fancy term which would automatically trigger elimination of the $1.1 trillion in Bush-era tax cuts for the rich by a lame-duck Congress between the November election and the date a new Congress takes office in January, 2013.

What Boehner does not acknowledge, however, is that the debt ceiling has been raised 106 times since 1940, according to the official scorekeeper, the Congressional Budget Office. The debt ceiling was raised 18 times by Ronald Reagan (who also raised taxes 11 times) and seven times by George W. Bush. Obama has raised the debt limit three times during his nearly three-and-a-half years in office. The only president who didn’t raise the debt ceiling was Harry S. Truman. America technically will run out of money early next year. The debt limit is raised periodically so that America can borrow money to pay its bills.

The contract between government and the people is simple: If people want services they have to pay for them. The difference between federal government financing and that of the states is that the fed has no balanced budget requirement—it simply prints (or borrows) more money—while 46 of the 50 states require constitutionally balanced budgets. At the state level, the equation is a clear choice: Either cut spending or raise taxes. In the 26 states where Republicans dominate the state houses, the war on public sector unions, the poor, elderly, minorities, and especially education, has been unrelenting as the G OP attempts to reverse the social order of the era and decimate the Democratic ranks.

Much of the nation’s job loss has occurred at the state level, mainly through layoffs, cutbacks and attrition. Education has been hit the hardest, with cuts in operating funds, salaries and benefits, financial assistance, funding for programs and accompanying increases in tuition, according to the Senate Budget Subcommittee on Higher Education Appropriations. Twenty-one states have increased tuition, with Maryland the lowest at three percent. California, for example, has increased tuition by 18 percent at the University of California, 26.2 percent at California State and 38 percent at community colleges. California faces a budget shortfall of more than $16. billion and the voters and the state legislature appear to prefer the cuts over tax increases.

Maryland tacked in the opposite direction. The state, dominated by Democrats and friendly to unions, increased taxes to avoid cuts in education and social programs. Income taxes were raised for individuals earning $100,000 and households with incomes above $150,000, a concession that Obama has consistently failed to win from Congressional Republicans in his effort to increase income taxes for those earning $250,000 or more.

Boehner’s problem is that he has been pushed to the extreme right flank of the GOP by the Tea Party class of 2010 House members, some say with the connivance of House majority leader and rival for power, Rep. Eric Cantor (R-VA). House Republicans have failed to present a serious budget proposal and have they been unwilling to negotiate with the White House in good faith.

Their only budget formulation has been tax cuts for the rich and increased spending for defense and the war machine of contractors that funds GOP campaigns. (The House reneged on its agreement with the White House by approving a defense budget that is $8 billion more than the number that was negotiated. The bill also contains a prohibition on gay marriage at military chapels. The White House has threatened to veto the legislation.)

And it’s not necessary to look any further than across the Potomac at Virginia to watch the clock and the calendar being turned back to the 1950s by the Republicans in charge. This is the very same state that considered requiring vaginal probes as a pre-condition for abortions. It flirted with dropping all restrictions on carrying concealed weapons. It rejected a qualified candidate for a judgeship because he’s gay. It opposes same-sex marriage. And a bill requiring voter ID became law just in time for the November election.

Thomas Mann and Norman Ornstein, two scholarly experts on Congress, argue in their new book, It’s Even Worse Than It Looks, that assigning blame to both political parties for the gridlock in Washington is no longer valid. They lay the blame for governmental paralysis singularly on the hyper-partisanship of the Republican party. Republicans are the Know Nothing party of today.