Not that much difference. 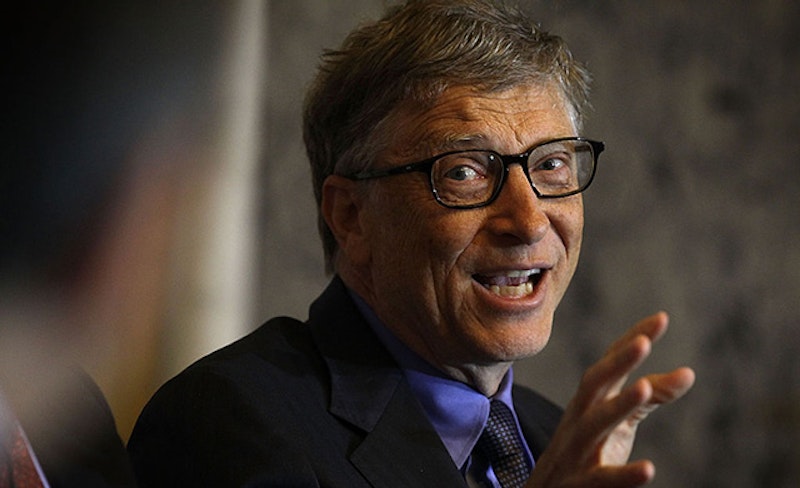 If there's one thing Donald Trump's election proves, it's that Americans love rich people. The wealthy, we're convinced, are industrious and innovative. Success indicates virtue and intelligence. Government is inefficient, wasteful, and dumb. Give it over to the efficient, virtuous plutocrats, like Trump, Michael Bloomberg, or Bill Gates.

Lumping Gates in with Trump may seem like a stretch. Gates is not a conspiracy theory hate-monger. He's mostly known now as a philanthropist who uses his wealth to finance worthy causes like malaria eradication and school reform. Trump inherited some of his wealth and his businesses are mostly scams and failures; he likes to call himself a billionaire, but the best estimates are that he's millions of dollars in debt. Gates created one of the most iconic companies of the Internet age, and he's legitimately the richest man in the world. Trump has failed upwards, to the detriment of everyone; Gates has put his smarts and talent to work for us all. Gates for president!

The differences between Gates and Trump are less stark when you look closer, though. Like Trump, Gates is not a self-made man. His father, William H. Gates, founded the prestigious law firm Preston Gates & Ellis and was wealthy and a well-known philanthropist. Like Trump, Gates started life with substantial privilege, connections, and money. He didn't ascend into the upper class by virtue of his brilliance. He was born there.

The success of Microsoft itself was due as much to shady corporate practices as to innovation or smarts. Microsoft leveraged its market size to force consumers to use its browsers and systems, and to block competitors. It had to settle a lawsuit with the US government, and it lost an EU ruling, forcing it to divulge information to competitors and hitting it with the largest fine in EU history to that point. In popular consciousness, Gates the philanthropist has largely eclipsed Gates the bloated predatory monopolist forcing you to use shitty software. But without the monopolist, the philanthropist wouldn't exist.

Gates' original foray into school reform pushed smaller schools as the solution to grade school and high school achievement. It wasn't, but Gates threw so much money around that to get grants, schools dutifully reduced school sizes, resulting in bureaucratic bloat and an expensive re-jiggering when Gates realized the strategy was failing. Gates' next bright idea was focused around teacher bonuses, an initiative that also didn't work.

Gates is not an expert in schooling; he's an expert in tech and manipulating markets to benefit himself. Yet, he spends billions on education funding, pushing US schools to chase after whatever new idea happens to strike his fancy, with little public oversight or voter input.

Gates isn’t an evil person. Unlike Trump, Gates wants to do good. He uses his enormous resources to try to help people, and his contributions to ending malaria have certainly saved many lives. But plutocracy isn't bad because plutocrats are all uniformly horrible, soulless assholes like Trump. It’s bad because those with no particular merit or legitimacy except for the accident of having been born into money are able to exercise sweeping power over the lives, and for that matter the deaths, of everyone else.

Gates found himself in a position where he could first manipulate software choices and then demand that people make useless and expensive changes to their school systems. Whether Gates is a good or a bad man is irrelevant; what matters is that he has enormous, unearned power to do good or ill. The country that enables Bill Gates will inevitably enable its share of Donald Trumps. Inequality breeds evil, even when the powerful exhibit occasional shreds of decency.