Making trade delegation wear hijabs in Teheran was a betrayal of principles. 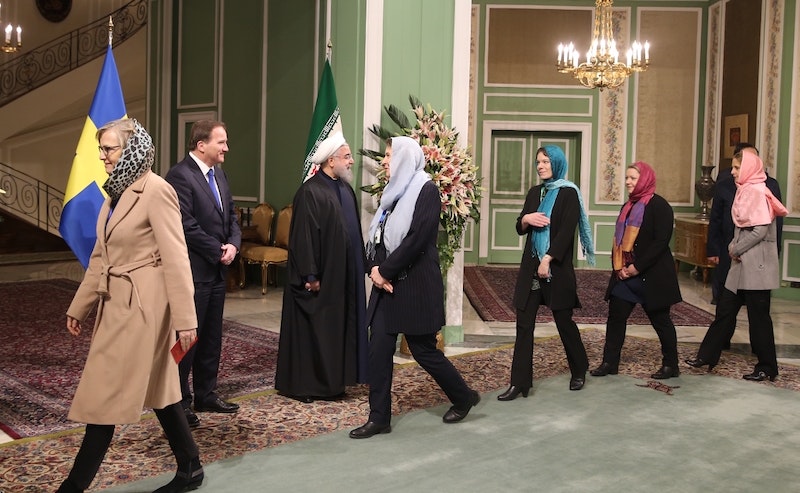 Swedish leaders claim their nation has the world’s first feminist government, but just last weekend it sent a delegation of women to Iran to sign a trade deal and forced them to wear hijabs, kowtowing to the Iranian theocracy. The photograph of five Swedish women, including Trade Minister Ann Linde, parading past President Rouhani (no handshakes allowed) is a graphic depiction of craven submission by a progressive nation to the regime that's the main government sponsor of terrorism in the world and an oppressor of women. It’d be difficult to find another a photo that so depressingly represents the failure and hypocrisy of both modern feminism and liberalism.

Officials in Stockholm claimed they were merely complying with local law, but they could’ve driven a harder bargain by insisting that, as non-Muslim visitors on a government mission, their representatives be granted an exemption. If the answer’s no, insist the meeting take place in Sweden. The Swedish government website proclaims, “A feminist government ensures that a gender equality perspective is brought into policy-making on a broad front, both nationally and internationally.” The trade mission’s trip to Iran belied this claim.

Even with the meeting in Stockholm, they’d have to remain firm, as the arrogant Iranians insist on the locals bowing to their culture even when they travel abroad. Italian officials, in a stunning display of cowardice and a betrayal of their history, had historical statues covered with white panels to protect Rouhani’s delicate eyes from nudity when he visited Rome last year. They also wouldn't serve any wine at their receptions. When the same Iranian delegation went to Paris and insisted no wine be served at a lunch, and that all the meat be halal, French President François Hollande cancelled it.

Modern feminism becomes phony when granting a pass to Islam on the strict gender equality it normally insists on. This is why you get Canadian Prime Minister Justin Trudeau, who presents himself as a staunch feminist, visiting a mosque where the women are treated as second-class citizens and forced to sit separately in the balcony. Feminists, and all liberals in general, tend to apply a lower standard to the behavior of Muslims, which must be depressing to those many Muslims around the world who seek a relaxation of religion-based restrictions on their behavior.

Swedish Prime Minister Isabella Lövin appeared to be trolling Donald Trump with a recent photo of herself signing a climate change law while surrounded by a group of women, but the photo of her trade delegation submitting to Rouhani’s anti-feminist demand is far more damning. Swedish women are legally entitled to all the rights and freedoms men enjoy, as are American women. Modern feminists are now obliged to fight for equal rights for their sisters abroad as well.

Islam is kryptonite to feminists. It strips them of their powers of conviction. That's how they've come to have Islamist activist Linda Sarsour as one of their most prominent leaders. She’s praised Saudi Arabia’s treatment of women, and on Twitter has said her female opponents don't deserve to be women and need a beating. No actual feminist would say such a thing, but she wears a hijab so she gets a pass. Feminists and liberals, using tortured logic, have come to see the hijab as empowering rather than the symbol of oppression it is.

The photo of the Swedish “feminist” government’s submission to Iran’s radical, anti-woman regime will live on as an artifact of principles betrayed. You have to be willing to lose some business deals if you claim to stand for human rights. From a strategic point of view, forcing your representatives to wear the religious garb of a religion not their own telegraphs your weakness in standing up to despots. Iran’s leaders are cynical authoritarians who use religion as a vehicle of power. Caving in to them makes you, and other Western nations, look easy to roll.