What Does a Trump Supporter Consider Sexist?

Being too tough on Kellyanne. 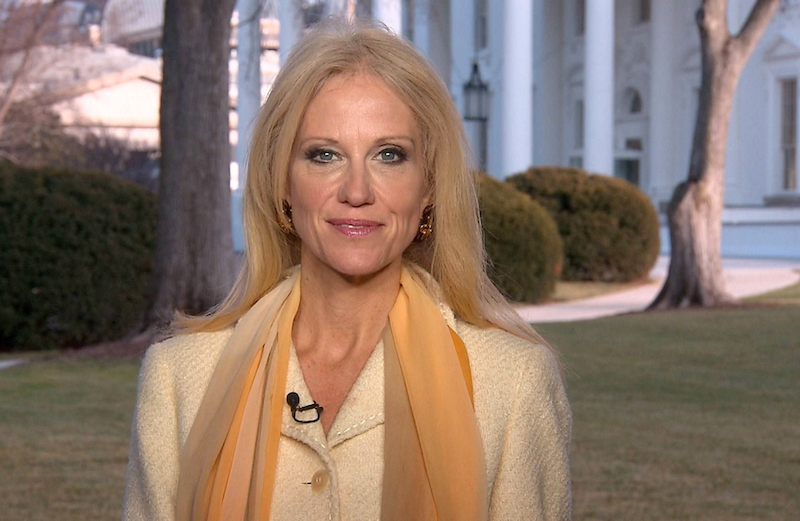 I have a special dislike for how Kellyanne Conway pronounces the word sexist. A normal person says “sek-sist” and lets it go at that. But Conway has to lay into the word. “I think that criticism is sekks-sist,” she says primly. Now a colleague has taken up the song. The occasion is Conway’s recent go-round with Jake Tapper, and the colleague is Dr. Sebastian Gorka, who wasn’t invented by Stan Lee during a dull moment in 1965 as the alter ego of a Daredevil villain. “The tone was very disappointing,” rumbles Dr. Gorka, who has a round little chin beard, black-framed glasses, and a pair of eyes that huddle together as he emits his fruity baritone. “It was trying to treat a woman as a punching bag, really.”

“So you see Tapper as being sexist to Kellyanne in that particular interview,” says his interviewer, a journalist with The Hill. The doctor’s ready. “I hope it wasn’t,” he says, voice up, chipper. “He was very nice to me, maybe because he never met me before. But, but why her, why Kellyanne? Why be so aggressive with her and not with me?” He purses his lips, tilts his head. “Hard to answer,” he says.

Ha, no. First, Conway’s a very big deal. No one has to explain who she is. Gorka, meanwhile, is a right-wing academic now serving in the White House as a deputy assistant to the president. Second, the topic of Gorka’s interview was Iran and what to do about it. The topic of Conway’s was credibility, the news media’s versus the Trump administration’s. Trump, a man who has lied many times, accused the media of lying and he singled out CNN as a culprit. CNN, of course, is the network that broadcasts Tapper. Conway versus Tapper was a grand throwdown to vindicate journalism’s honor. There’s also the distinct possibility that Tapper wasn’t as hard on Conway as all that. Aggressive, brash and determined, but not brutal. To a non-Trumpista, the interview appears to be an encounter between two media pros, as opposed to the beating up of a punching bag.

Brace yourself, but I think the doctor’s full of it. He doesn’t think Tapper was being sexist. His aim is just to do some judo and use liberals’ language against them. (Whether Tapper counts as a liberal is another question. But to the doctor he’s close enough.) Of course, we’ve been told many times that modern life is plagued by false accusations of bigotry used to shut down debate and tar the innocent. We’re told this by the right, in between the times they find it useful to accuse someone of being racist or sexist. A black Democrat managed to serve two terms as president without singing an aria about the racial hatred he faced. Clarence Thomas couldn’t get through his confirmation hearings without saying he was being lynched.

When the irascible Senator Rand Paul shooshed a woman interviewer, observers remarked that they’d never seen a male interviewer treated that way. Impatient voices on the right responded that the gal was just being treated equally. To make the claim, they had to overlook the shooshing and pretend that Paul was accused of simple roughness, of the give-and-take that guys supposedly engage in. Now we’re told Jake Tapper was too rough on “Kellyanne” because she’s a gal. Next we’ll be told again about the grievance society and how the left traffics in false bias complaints. Until then, let’s bow our heads as Kellyanne battles sexism, or sekks-sism.