A Panorama Obscene With Entitlement 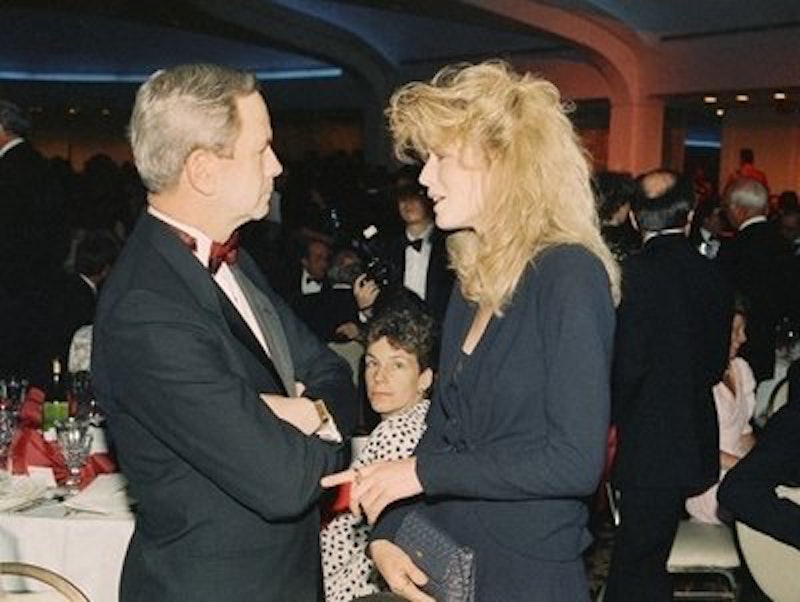 When Baltimore Sun reporter Michael Kelly waltzed into the White House Correspondents Association dinner in 1987 with Fawn Hall on his arm, he unintentionally launched the gatherings’ ignominious celebrity roundup of eminences, poo-bahs and big-and-little shots at what had previously been a toast to the First Amendment and a scholarship fundraiser for young journalists.

Today, that worthy cause has been debased by its dreadful excesses and showoff-y table guests to the point where the WHCA is under pressure to end the madcap competition among members to outdo each other or to simply put a merciful end to the pretentious dinner in drag, which every year attracts about 4000 reporters and guests to the Washington Hilton ballroom. It’s become a night or three, this year on April 29, when Hollywood and New York swarm the nation’s capital. The panorama is obscene with entitlement.

For those ill-disposed to remember, here’s a primer: Kelly was the first reporter killed in the Iraq war. He worked briefly for The Sun and before his death went on to work for a number of other publications, memorably The New York Times Magazine where he won critical acclaim for a lengthy piece deconstructing Hillary Clinton. Kelly broke, or set, precedent by inviting Hall as his table-guest to the WHCA dinner, which formerly had been limited to journalists and mainly ranking government officials, otherwise known as news sources.

And Hall, the long-forgotten winsome blonde, was Col. Oliver North’s secretary during the Iran-Contra scandal and testified before Congress that she’d helped to shred confidential documents. Hall was the very first off-beat “celebrity” to attend a WHCA dinner, and it’s no stretch to figure why she (and Kelly) caused such a splash among the tuxedoed and starched-shirt assemblage of movers and shakers. The WHCA dinner has since become such a puffed-up and selfie-conscience communion of the great and the near-great that it’s earned the noteworthy put-down, “nerd prom.” The WHCA dinner is an unabashed competition for star power and a parody of itself, especially in recent years when it’s become another cable TV red carpet celebrity watch.

(A disclaimer: In my time, I’ve attended two WHCA dinners, one as a guest and the other as a White House correspondent, covering the final year, 1968, of Lyndon Johnson’s presidency for the Hearst newspapers. Back then, the dinners were exactly that—dinners and a few speeches and awards. Nonetheless, they still involved rubbing tuxedoed shoulders, reporter-to-guest, making nice with the very people the press is assigned to cover. I’ve also attended one Gridiron Dinner, which is kind of a WHCA dinner with satirical skits, and an Alfalfa Club dinner, which is all about liquidity, both money and the bottled kind. Those are the three main events of Washington’s winter-spring social season, and the only one that’s gotten out of control is the WHCA dinner, the very group that ought to know better and conduct itself accordingly.)

What was once a night of simple bonhomie and obsequious mingling among reporters and their newsworthy prey has degenerated into a week-long orgy of lavish parties and take-home swag bags that would be the envy of the Oscars and Golden Globes. The impression, visual and verbal, is all the more embarrassing when the event is juxtaposed with an administration that regards the press as “scum,” “the opposition party,” and a collective that “should be embarrassed and humiliated and keep its mouth shut and just listen for a while.” Those last bon mots are from the pursed lips of Stephen Bannon, President Donald Trump’s doomsday philosopher in-residence. The White House has not announced whether Trump will attend this year’s dinner.

To set the tone and the example, The New York Times has, in recent years, pretended the WHCA dinner doesn’t exist by not allowing its reporters to attend. And both The New Yorker and Vanity Fair magazines have announced that they’re cancelling their annual see-and-be-seen parties. MSNBC is reconsidering its annual party as well. And comedian Samantha Bee announced that she’s sponsoring a competing event in Washington on the same night, “Not the White House Correspondents Dinner.” These are just a few of the hospitality offerings surrounding the main event. But the WHCA president remains blissfully undaunted. Jeff Mason, of Reuters, persists that the party will go on as scheduled and remain true to its purpose as a testament to a free press.

Not to be overlooked, of course, is the comic opera side of the evening when traditionally the president, with script in hand honed by the best joke writers in America, lampoons the press and anything else that’s causing him heartburn. By contrast, the comic of the night, usually following the presidential warm-up, is the evening’s risk-taker with a tough act to follow. Last year’s performance by comedian Larry Wilmore, for example, was a pathetic attempt to out-black the nation’s top black, President Barack Obama. Wilmore bombed miserably. And the year before, Obama did a searing takedown of Trump as the butt of the jokes sat stone-faced while the audience roared.

The comedian for the night has not yet been announced. But if Melissa McCarthy’s Saturday Night Live satiric riff on the combative Sean Spicer, the White House press secretary, is a hint of what’s in store for the fumble-fingered Trump Administration, some heads may be rattled by night’s end. It’s been reported that Trump personally dressed down Spicer after the SNL parody because Spicer is not measuring up to the “central casting” look and demeanor that the president demands of the people around him. In fact, the WHCA might redeem itself by recruiting McCarthy to reprise the skit for the evening’s performance.

This is a time when the press ought to take itself seriously if it wants to be taken seriously. The WHCA dinner, though arguably a single night out on the town, does not play well in the nation’s wheat fields and rust belt towns where Trump is right no matter how wrong he is. And the press is wrong no matter how right the reportage is. It’s easy to build a case that the Trump Administration presents a challenge like very few, if any, before it. It is attempting to create a parallel universe that exists only in the mind of its leader but that the rest of us had better accept or be spanked because Trump said so.

The true function of a free press is not to wine and dine in the capital’s pleasure domes—including those coveted White House state dinners—but to do the pick-and-shovel work of digging deeper and harder. It would behoove the WHCA to scale back on the frivolity and the partying and to present the serious side of journalism, which is to make certain that the public gets the truth about its elected officials and not a whimsical version conjured up behind a sorcerer’s magic curtain. Don’t give Trump any more reasons to assault the press and the First Amendment. Trump likes to label what he doesn’t like as “fake” news. It’s the function of the press to keep showing the public what real news is.