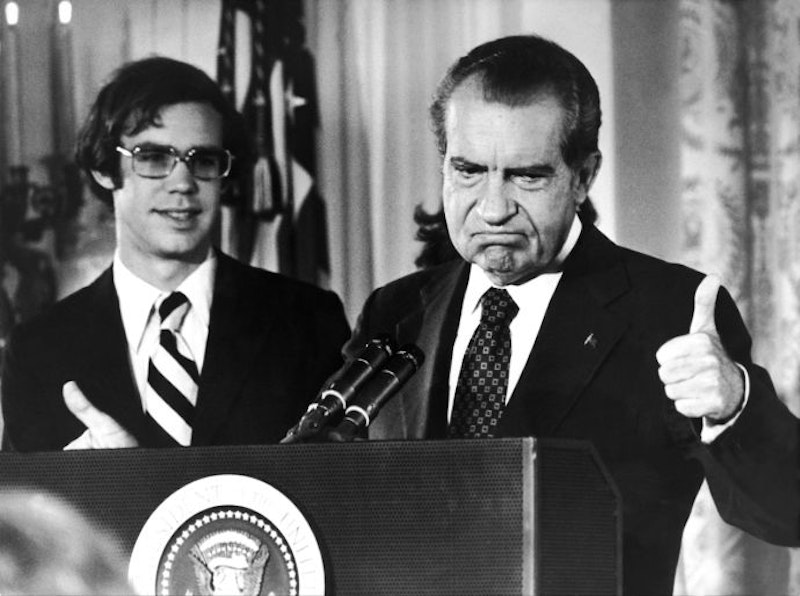 Generally, I don’t engage in long Twitter threads, create “tweetstorms,” block many people, or post really nasty items. There’s enough of that to go around. The other day, however, I was intrigued by former Reagan and George H. W. Bush adviser Bruce Bartlett’s hypothetical thought. He wrote: “Chilling thought—if the Rupert Murdoch/right-wing media universe existed in 1973-74, Nixon would have survived, easily.” It was a popular tweet, and Dan Kennedy—a smart media critic at The Boston Phoenix for years and currently an associate professor at Northeastern University’s journalism school, as well as an active writer—agreed, responding, “Of course. Many of us have been saying that for years.”

It’s a mildly provocative barb, and perhaps true—although you could flip it over and say that if social media existed during Watergate, Nixon would’ve resigned earlier than August 8,1974—but really just idle speculation of something that didn’t happen. You could play the “what if” game endlessly, which is fun, but in the end it’s just a game. And pointless. What if Twitter and Facebook had existed during Bill Clinton’s 1992 primary campaign for the Democratic nomination? Chances are that the draft dodging, allegations of womanizing, and dissembling on his use of marijuana would’ve prevented him from becoming the “Comeback Kid” after the New Hampshire primary. No presidency, no Hillary Clinton, just obscurity, sort of like Gary Hart. Likewise, just imagine the uproar after the Monica Lewinsky revelations? Does anyone believe he’d have remained in office blazed 24 hours a day?

Obviously, had today’s social media existed in 1960, John F. Kennedy, dogged by his philandering, sketchy financing by his father Joe, and medical history, probably wouldn’t have even run. The same could be said for Ronald Reagan: if his toxic relationship with his children had been revealed, and it would’ve been, he probably doesn’t become president. Dwight Eisenhower’s bad health, exposed in more detail, might’ve led to him stepping down after one term. You can go on and on: FDR’s polio, Japanese internment camps, and Supreme Court packing plan; George W. Bush’s early adulthood drinking (who knows what stories were lurking?) and sweetheart deal with the Texas Rangers; and Woodrow Wilson’s racism, suspension of the First Amendment during World War I, and his wife Edith running the show after his stroke in 1919.

But back to Bartlett and the Murdoch/right-wing media universe. Now, that did exist in 2008, but somehow Barack Obama was elected twice as president, so it didn’t have much effect, at least on his campaigns, if not his lack of punch during the 2010 and ’14 midterm elections. As for Watergate, had Fox News been around then, and a Hannity-like presence defended him till the end, what about CNN, MSNBC, the major networks and major newspapers like The New York Times and Washington Post? Woodward and Bernstein (or surrogates at the Post) would’ve tweeted their latest discoveries non-stop. I can’t imagine Nixon lasting beyond the “Saturday Night Massacre” or hilarious “I am not a crook” declaration.

All of this is a load of laughs, a mind-stretching exercise for dinner party chatter or just a conversation between friends, but it’s not reality. Best to leave this sort of material to writers of historical fiction, say Thomas Mallon, the great author who’s currently at work on a book about George W. Bush.