TV and the Trump phenomenon. 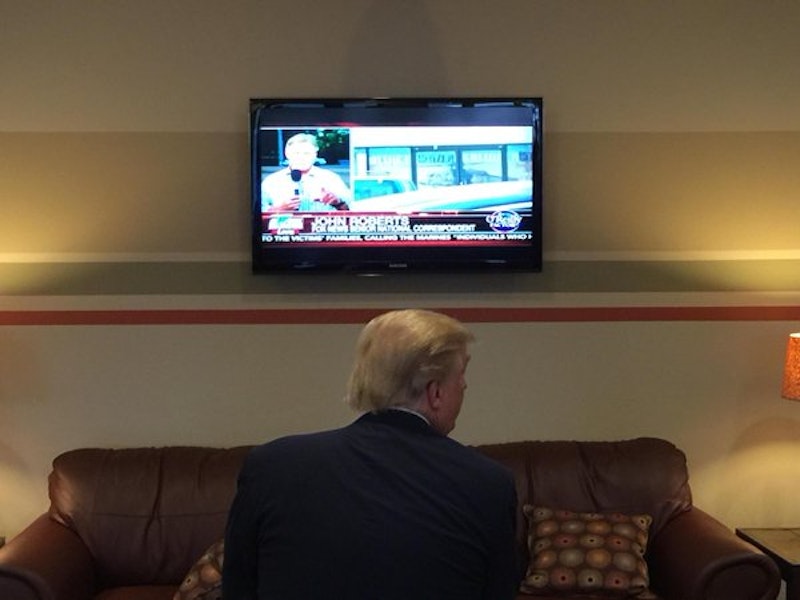 What’s easy and fun? Calling Donald Trump a Nazi. What else? Well, The Washington Post tells us, “it’s become something of a cottage industry to try to link Trump's early-morning tweets to something he has seen on television in the very recent past.” No need for “early-morning” as a qualifier. When our chief executive tweeted his possible solution for Chicago street violence—“I will send in the Feds!”—it was 9:25 in the evening. About an hour earlier Bill O’Reilly on The O’Reilly Factor had suggested that Trump might dispatch federal authorities to the city.

Our new boss watches TV, thinks TV, and lives TV. Without Fox News he’d have Breitbart as his only source of ideas. Without Celebrity Apprentice his party’s voters would never have dumped him on the GOP’s leadership. Here we circle back to the Nazis. Trump and the Trumpistas are often called Nazis and sometimes Fascists (as in Mussolini’s Fascists). That’s because Trump’s an authoritarian bigot. But there’ve been plenty of that type throughout the world, not just in Italy and Germany. What’s being talked about is a family resemblance rather than a close parallel. I’d like to suggest something tighter, a piece of congruity that explains something new about our country’s plight.

Both Hitler’s Nazis and Mussolini’s Fascists were made up of louts and proles who took over their respective countries’ conservative movements. The powers-that-be thought that the newcomers would play the supporting role that God intended. No matter how much of a fuss the lowlies made about their uniforms and drill, in the end they’d take guidance from the elites. But, as it turned out, no. Instead aristocrats and factory owners had to step back and cede leadership to hoi polloi. The fat cats weren’t kicked out of power, but they were no longer number one. They were in the sidecar and the Nazis (or Fascists) had the motorcycle. The powers-that-be received much of what they wanted, including the destruction of the left. But some wild extras were thrown in, crazy special projects of the new leadership, and these items eventually proved cataclysmic.

In America, Trump and his followers now have the motorcycle. In the sidecar one finds the Republican leadership, the Koch brothers, and National Review. But Trump’s followers aren’t Brownshirts. More than anything, they’re TV viewers who this time made a special effort to vote. Their hero, as noted, is a TV viewer when he isn’t being a TV star. On his side are Sean Hannity, Bill O’Reilly, Ann Coulter and Laura Ingraham. Against him are George Will, William Kristol, Charles Krauthammer and Kevin Williamson. The first group is a list of TV personalities who sometimes sell books. The second’s a list of writers who sometimes go on TV.

The American conservative movement has developed something new in politics, an entertainment wing that rivals the governing wing. Rush Limbaugh signaled the new branch’s power a quarter century ago, when he became the Republican Party’s ward-heeler in chief. By the start of the Obama era, Fox News and Roger Ailes were largely setting the Republican agenda. For his part, Limbaugh could humiliate the chairman of the Republican National Committee for speaking out of turn. And now an entertainment figure has been voted leader of the party and boss of the U.S.

Fox viewers were supposed to take what they were given (Marco Rubio, most notably) but decided otherwise. They don’t think that Trump knows much about conservatism and they don’t care. They look at Trump on the screen and see the man they want. Op-eds don’t matter to them; most of them aren’t that educated, not compared with the dentist who thinks he’s an intellectual because he reads Jonah Goldberg. The party wanted these people to keep on with the supporting role they’ve played for the party since Nixon. But the hoi polloi have grabbed the motorcycle. Luckily no Brownshirts are involved and the movement’s ideologues are few. Hitler and Mussolini were strenuous and that doesn’t cut it for the new breed. Today’s America has given birth to coach potato fascism.

The GOP now has the best chance it’s going to get for enactment of its agenda. But it’s stuck with somebody unstable. Concentration camps probably aren’t coming, but nuclear war can’t be ruled out. The Party certainly didn’t want brown people being insulted—that’s all Trump and his anger-porn addicts. After decades of the TV showing them the scary people, they want the TV to show the scary people getting it. A political movement has turned itself into a vehicle for generating TV viewing, and it’s taken one of the country’s two major parties with it. Where the motorcycle ends up is anybody’s guess, but this is a world full of cliffs.