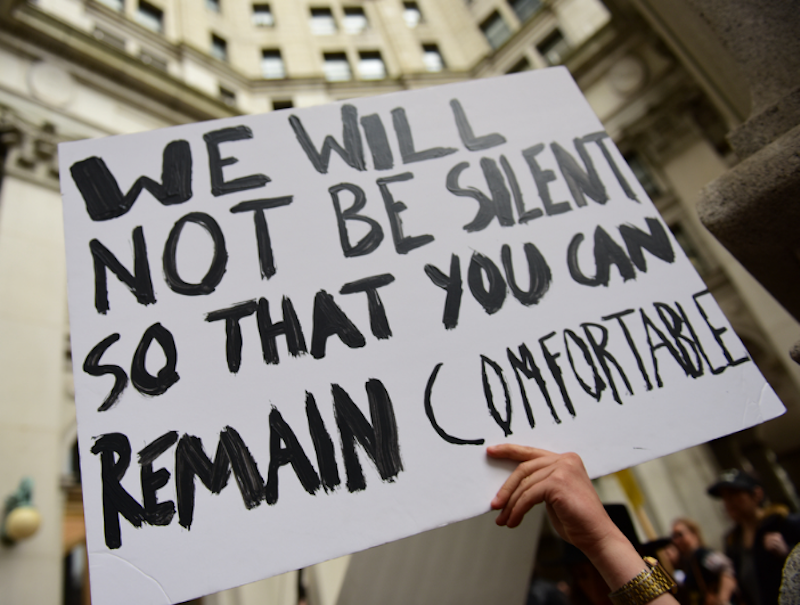 My friend Helen Pluckrose of Areo Magazine spoke on a panel recently at Portland State University called “We Need to Talk about Diversity,” which also featured James Damore, the Google Memo Guy. Based on all accounts, everything ran smoothly, except for one incident where someone smashed audio equipment. Other than that, Antifa didn’t show up and burn anything down like last year during a Milo Yiannopoulos speaking engagement.

There’s a myth that Leftists are against free speech and want to shut down controversial speeches. I’m a proud Leftist, and consider myself one of the most pro-free speech people around. In fact, I believe the Portland State panel could’ve been more pro-free speech if they had actual people of color and LGBTQ people to talk about diversity rather than four white people.

Critics of identity politics often say that identity has nothing to do with the validity of one’s argument. When it comes to social and political issues, however, including people from different backgrounds creates a more diverse array of opinions on controversial subjects.

I was at the 2016 Women in Secularism 4 conference where my friend Diane Burkholder participated in a panel debate about safe spaces on campus. The other participants were Professor Melanie Brewster of Columbia University, and ex-Muslim activists Maryam Namazie and Sarah Haider, with Dr. Ashley F. Miller as the moderator. While the debate got heated a few times, having two people of two completely different backgrounds like Burkholder and Namazie introduced nuance into the discussion. Burkholder has been silenced in the past in the name of “free speech,” while Namazie has been silenced in the name of “safe spaces.” Although the debate had no resolution in the end, it gave people from both sides of the argument plenty to think about.

Another example is the lack of transgender representation in the #MeToo conversation, which I recently wrote about for Huffington Post. Most of the conversation has centered on cisgender women, and while they need to tell their stories, so do trans people. Unfortunately, the discourse surrounding #MeToo focuses primarily on cis women, leaving many trans people to feel like they have no place to share their assault stories. This is troubling because, according to the National Center for Transgender Equality, 47 percent of trans people say they experienced sexual violence sometime during their lives. Yet even in Time’s groundbreaking article on the Silence Breakers, sexual violence against trans people is mentioned only briefly.

How do we solve this? I don’t believe mandating a quota is the answer because that can lead to tokenizing minorities. I suggest looking around at the discourse surrounding a particular issue and asking, “Whose voice isn’t being heard? Who’s being excluded from this conversation?” After that, those holding the microphone should voluntarily pass it to those not represented. In this way, new ideas can be introduced, which currently still favors those with the most privilege.

One of my favorite philosophers is John Stuart Mill, who summed it up in his 1859 work On Liberty: “But the peculiar evil of silencing the expression of an opinion is that it is robbing the human race, posterity as well as the existing generation, those who dissent from the opinion still more than those who hold it. If the opinion is right, they are deprived of the opportunity of exchanging error for truth; if wrong, they lose, what is almost as great a benefit, the clearer perception and livelier impression of truth, produced by its collision with error.”