While Trump flops around on gun control. 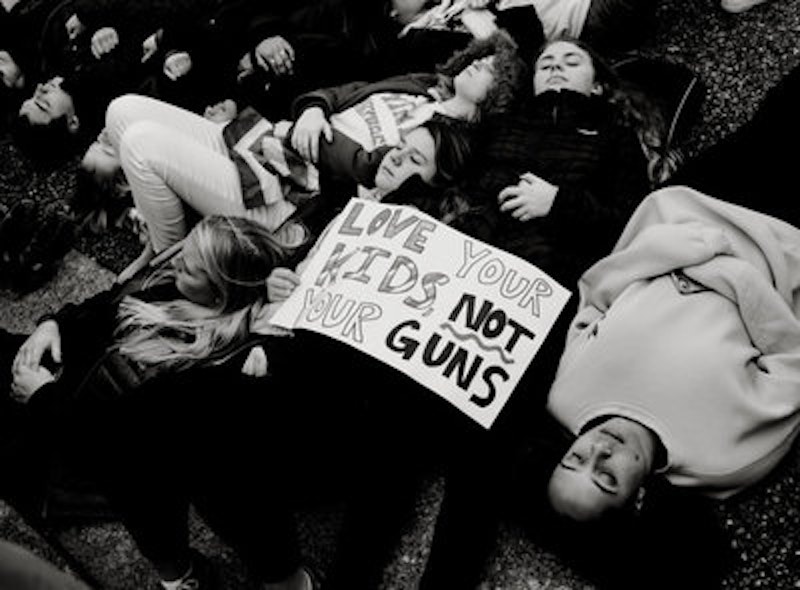 This could be a generation of adults that learns from its children. Trouble is, news cycles these days last but a flicker. One day the spotlight is on thousands of young people marching on capitals and meeting with the president. The next day the glare shifts to the NRA’s human trumpet, Wayne LaPierre, denouncing gun-weary teenagers as opponents of freedom.

In this case, though, the competition is the spotlight and President Trump refuses to surrender it. He’s moving swiftly to seize the mass shooting issue and make it his own. And as news cycles come and go, this one arrived just in time for the White House to deflect attention from the Russia investigation that bedevils Trump as Special Counsel Robert Mueller steps up the pace with indictments and meetings with persons of interest.

But to illustrate the lickety-split movement of news, before the kids were out of town, Trump convened a White House meeting of community officials and workers to gather ideas and command the camera. And just as that event broke up, Mueller knocked Trump off the headlines with more indictments in the Russia probe.

Sustaining the momentum of outrage is the challenge of any movement. The commonly used phrase was “24-hour news cycle.” But a news cycle today lasts about two minutes before the camera moves to the next great picture show, or the thumb flashes out another competing Tweet. The students are pushing to get beyond the predictable “thoughts and prayers” reaction of elected officials and enhance legal protections from gun violence at their schools. A massive march on Washington, projected at a half million, is being organized for March 24, with simultaneous marches in major cities across the country. Celebrities are ponying up hundreds of thousands of dollars to fund the outpouring.

And the kids on the streets are getting a lift from pin-stripers in boardrooms. A number of major corporations are ending their business ties with the NRA, which could affect the organization’s purchasing power with vendible elected officials. And Republican officials are inching away from the NRA by joining the clamor for raising the age limit to 21 for gun purchases.

The kids are on to something where adults have failed. They’ve seized the moral authority on the issue of gun regulation after 17 of their classmates and teachers were killed by a manic former schoolmate. Nikolas Cruz’s weapon of choice was the ever-popular AR-15 assault rifle, dubbed “America’s gun,” one of nearly a dozen weapons in the 19-year-old’s arsenal.

The teenagers out front on the issue are poised, articulate and knowledgeable on the issue of guns and sincere in their grief over the loss of classmates in a spray of bullets from a military-style weapon that’s literally a shredder. And they’re angry.  So much so that they infuriated the right-wing primates and conspiracy theorists to spew their moldy breath of hatred and fanaticism in accusing the youngsters of being phonies and actors. One survivor’s mother said the family has received death threats. (By coincidence, the number of hate groups has increased in the U.S., from 917 in 2016 to 954, as defined and cataloged by the Southern Poverty Law Center in its newly released report.)

The last time young people got riled up with results was during the convergence of the civil rights movement and the Vietnam War. They took to the streets and in 1968 their “Kiddie Crusade” helped drive President Lyndon Johnson from the White House and later forced President Richard Nixon to end the draft and eventually the war. (More recently, the “Occupy Movement” fizzled under government pressure to pull down their tents and vacate public property.)

And in Maryland, the push for gun regulation had a twist. In March of 1969, Joseph D. Tydings, then a U.S. senator from Maryland, wrote an article for Playboy, then the bosomy bible of male fantasies, denouncing the gun hucksters from the NRA and calling for greater gun regulation following the assassination of Sen. Robert F. Kennedy. (Tydings also received splashy unwanted national publicity in his 1964 campaign when it was revealed that a Playboy “bunny” was volunteering at his Baltimore headquarters after her day job at the old Playboy Club on Light St.)

A year later, in 1970, when Tydings was up for reelection, the gun lobby unleashed its money and its manpower to help defeat him. The state was plastered with bumper stickers and placards that read, “Playboy Joe/Has Got to Go.” There were other, more compelling, reasons for Tydings’ defeat, but the gun lobby’s all-out attack was a small but noisy contribution. (Back then, the NRA was more of a gun education organization than the weapons merchant that it is today.)

And Maryland, it should be noted, enacted the nation’s first modern and most stringent gun control law in the nation at the time in 1973. (New York’s Sullivan Act was adopted in 1911, but it was mainly a patronage law to determine which friends of Tammany Hall were awarded gun permits. And in the original gun control law, Dodge City required all gun carriers to check their weapons upon entering a saloon.)

President Trump spent 70 minutes meeting at the White House with a delegation of students, teachers and parents mostly from Marjory Stoneman Douglas High School, in Florida, where the latest mass shooting occurred. The White House no doubt viewed the opportunity as a welcome diversion from the chaos of recent months.

Trump, according to reports, was mostly silent, though he had crib notes in hand. He’ll never match the empathy of Presidents Bill Clinton and Barack Obama when shootings occurred during their administrations. Trump had talked about banning “bump stocks,” an add-on gadget that converts a semi-automatic weapon into a machine gun. And he’d initially spoke of more emphasis on mental health than on gun regulation even though he’d hinted at tightening background checks. Most repellant of all to the NRA, Trump has ruminated about raising to 21 the age to legally purchase a gun.

But Trump had pledged fidelity to the NRA and its gun-loving agenda that spent $30 million to help elect him. And after his flirtation with common sense regulation, Trump echoed down on the side of the NRA—more guns by arming teachers. “ATTACKS WOULD END,” he said in one Tweet. “Highly trained, gun adept, teachers/coaches would solve the problem instantly, before police arrive,” Trump thumbed in another. Trump even proposed bonuses for teachers that pack firearms. Teachers individually, and as a group, vehemently oppose the idea. Eight states allow teachers to carry firearms in schools.

Trump has flopped around on the gun issue like a fresh-caught flounder on a wet deck. Wherever he eventually settles, it’ll likely be what’s acceptable to the NRA, as he said “the NRA wants to do the right thing.” The appeal of that statement is its imprecision. The Republican-led Congress is in no mood to change existing gun laws. In addition to the $30 million the NRA spent on electing Trump, it also contributed $9 million to members of Congress over the last election cycle. The NRA and the Republican Party are fearful of a Democratic takeover of Congress in this year’s midterms, which could change attitudes towards gun control legislation.

It has become the NRA’s standard line of defense—say “it’s too soon,” remain silent and out of public view for a week after a mass shooting, then come out foaming at the mouth with poisonous slogans and omens of Second Amendment collapse.

At the annual conservative gabfest, the Conservative Political Action Conference, the NRA’s executive director, LaPierre, and Trump were in synchronicity on the issue of arming school personnel. “An armed society would stop school shootings,” LaPierre told the audience in his speech. “Evil walks among us. And God help us if we don’t harden our schools and protect our kids.” (Trump echoed, “We have to harden our schools, not soften them.”) He accused the media of covering mass shootings to “juice the ratings.” And those who want to increase gun controls, La Pierre said, “don’t care about our school children, they want to make all of us less free.”

The latest Quinnipiac Poll shows that 67 percent of Americans—including 53 percent of gun owners—favor stricter controls on the purchase of weapons. Guns don’t kill, people do. Yes, but they do it with guns.