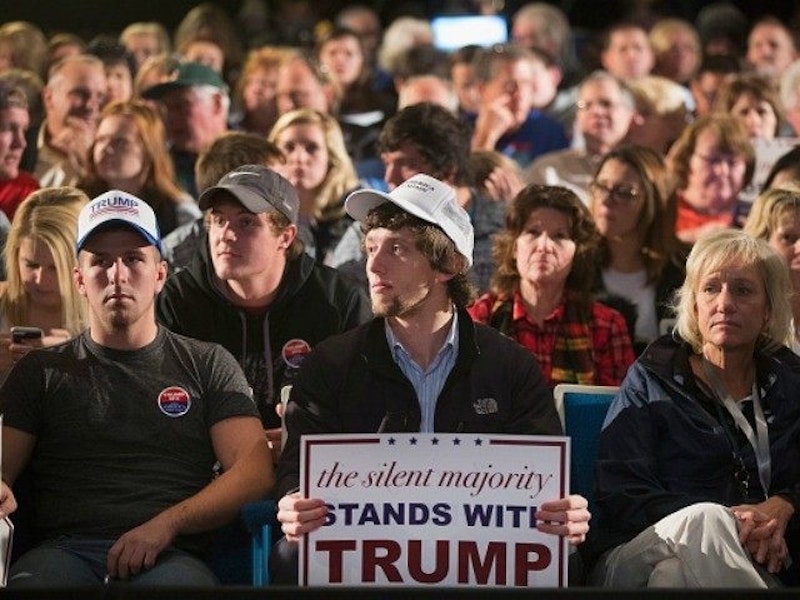 The audiotape of Donald Trump bragging about sexual assault has swamped most of the other news stories about Trump's despicable character. As one example, journalist Kurt Eichenwald's account of how a Trump supporter sent him a video designed to trigger his epilepsy has gotten little traction. The story is worth revisiting briefly, though, not because of what it says about Trump's character, but because it sheds light on one of the shibboleth's of the election—PC culture and free speech.

Many conservative or centrist commenters have argued that Trump is a reaction to liberal censorship, hegemony, and intolerance. Ross Douthat, for example, has said that left intolerance and "institutionalized political correctness" opened the door for Trump. Trump is unfiltered; he speaks the angry sentiments about immigration that the Puritan elites have deemed impolite. Trump, the argument goes, is a kind of culture warrior against oppressive do-gooders and their totalitarian regime of enforced multiculturalism. Speech has been repressed; Trump is freeing it—even unto the boasting about groping women.

But are Trump supporters really some sort of free speech champions? Eichenwald's experiences suggests otherwise. He’s written a number of articles critical of Trump, including pieces about possible conflicts of interests resulting from Trump's business ties to foreign countries. These articles unleashed a barrage of abuse and vitriol from Trump supporters—much of it anti-Semitic. Eichenwald's been called "kike" and "Jew," and he's received anti-Semitic cartoons. He's also been the target of threats; he says one Trump fan outed Eichenwald's children's schools. And, again, since Eichenwald has written publicly about his epilepsy, one Trump supporter sent him a video designed to trigger an attack. Epileptic seizures can be dangerous and even deadly; that video wasn't a prank, it was assault.

The stream of abuse Eichenwald has received is not unusual for this election season; as he says, many reporters who’ve written negative stories about Trump have been similarly targeted. And Eichenwald’s been the target of threats before when writing about controversial topics. But the intensity and viciousness of Trump's fans are still unusual—so much so that Eichenwald said that he actually discussed with his family whether he should continue to pursue Trump related stories. He eventually decided to go on. "But," he said, "why is this even a discussion? We do not live in a third-world nation where journalists who report unpleasant realities are in danger."

Eichenwald is obviously raising free speech concerns. But in most cases, stories about harassment online, or for that matter stories about Trump, are framed around racism, anti-Semitism, misogyny, and prejudice. In contrast, "free speech" is mentioned as a serious concern only when marginalized groups criticize people with a large platform—like, say, Tim Burton or Lionel Shriver. Questioning the creative choices of such people is presented as a slippery slope to totalitarianism. Self-declared Nazis sending death threats to journalists—white, Jewish, women, POC—somehow doesn't activate the same First Amendment concerns.

In terms of actual threats to free speech, the Trump swarms targeting Eichenwald seem like they'd be much more of an issue than people criticizing Burton. Burton has not gotten death threats, as far as I know. And as far as dangers to the republic go, "cast more black actors" seems a lot less ominous than "stop writing critical articles about a major party's presidential nominee." Criticizing someone's art, and asking them to do better, is different in kind than trying to give investigative journalists epileptic seizures to prevent them from doing their jobs.

But "free speech" at the moment has simply become a culture war trope. "Free speech," in current discourse, doesn't mean, "I care about first amendment rights." It just means, "I hate those stupid leftists." Which in turn indicates that Trump is not some sort of backlash to PC. Rather, reactionary assholes who love Trump know that part of being a reactionary asshole is shouting about free speech and the totalitarian evils of PC. It's just identity politics.